How Smart Is Your Artificial Intelligence? In 1950, Alan Turing, a pioneer of artificial intelligence (AI), proposed what’s now known as the Turing Test—an evaluation of a machine’s ability to behave like a human. Though there’s still plenty of room to improve, many AI systems are nearing Turing’s benchmark. And as they do, AI on our phones, TV game shows, and IT systems are sounding more like us than ever before. 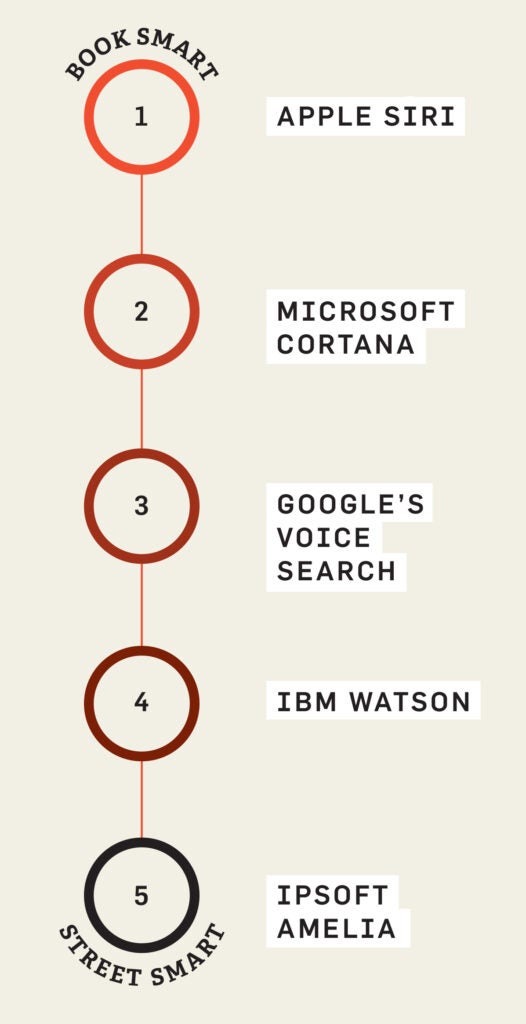 For artificial intelligence—just as with people—knowing the answer to a question (the “book smart” end of our spectrum) is only half the equation; a little bit of contextual awareness (or “street smarts”) goes a long way.

1. Apple Siri: By accessing information on an iPhone, in apps, and online (think Wikipedia), Siri handles simple tasks and can answer straightforward questions. It can look up the weather, direct you to a meeting—or even help settle a bar bet.

2. Microsoft Cortana: Prior questions (and answers) help this Windows Phone assistant establish context. It also learns the nuances of a user’s speech. For instance, if you refer to your home as a “pad,” Cortana will learn to identify your intended meaning.

3. Google’s Voice Search: Google’s voice search can answer follow-up questions, and it can figure out exactly what a person is referring back to. For example, “What team does Tony Romo play for?” can be followed by “How tall is he?” or “When’s the next game?”

4. IBM Watson: Using Watson, developers can create applications that analyze complicated data sets (like medical records). The system can then assist in diagnosing and prescribing treatments. It can also engage in a give-and-take dialogue with users.

This article was originally published in the February 2015 issue of Popular Science, under the title “How Smart Is Your AI?”