Is it safe to lift weights while pregnant?

There's very little information out there. 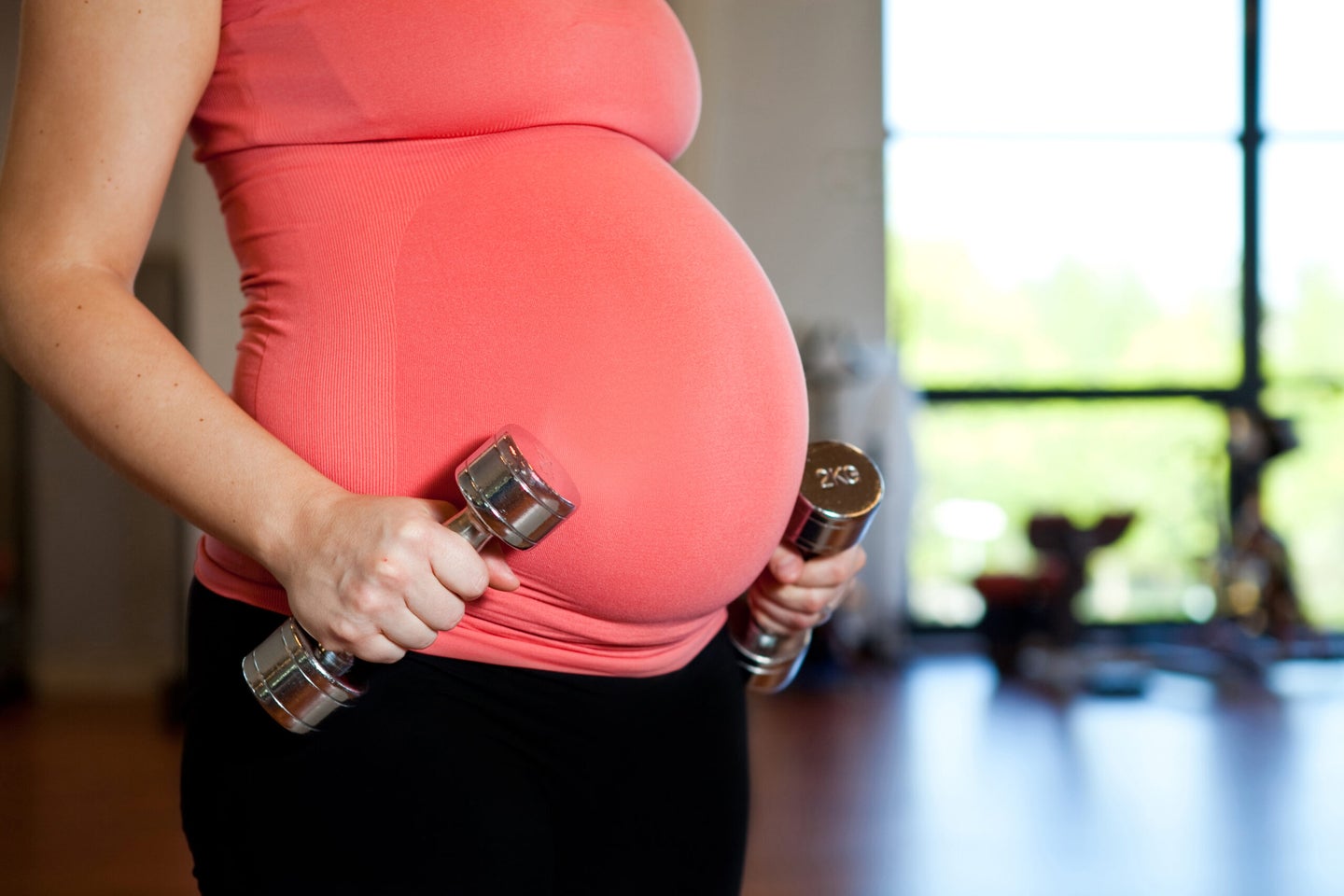 This post has been updated. It was originally published on January 29, 2019.

Even in 2019, many of us still act like pregnancy is practically a disability. Anyone in that condition should take it easy, eat plenty of food, and generally avoid doing anything that might be even remotely construed as interfering with the body’s ability to grow a human being. For decades that advice also extended to exercise in all forms. The prevailing thought was that it was better to rest than to over-exert yourself. But plenty of expectant parents want to maintain their workout regimen as much as possible when they’re pregnant, and they want to do it safely.

Unfortunately, there’s not a lot of research to rely on—and what little there is has, in many cases, been overturned by more recent analyses. Yet there are still plenty of physicians who confidently proclaim that a pregnant person can’t lift more than 15 pounds safely. “I had my first son five years ago and I have my grad degree in coaching and exercise science, and I just felt like, ‘how do I know nothing about this?’ If someone would have known, it would be me,” says Brianna Battles, a coach and now-expert in training pregnant people. “There was no information about women’s health as it pertained to pregnancy or postpartum, and for athletes in particular. I’m not going to use pink dumbbells and do yoga. It made me so upset.” Today, she runs a certification program supported by the National Strength and Conditioning Association for trainers to learn how to handle pregnant clients safely.

We consulted Battles along with some other experts to figure out how you can stay active without putting a growing fetus in jeopardy.

Should I lift weights at all when I’m pregnant?

In all the meta-analyses and expert opinion papers on the topic, there are some broad strokes that everyone can agree on. One is that you probably shouldn’t be getting into an intensive weight lifting regimen while pregnant if you haven’t lifted before. You can certainly start to exercise and lift light weights, but you shouldn’t suddenly take up competitive body building while you’re literally building a body.

But let’s assume you’re a person who’s lifted before and wants to continue. There are ways to keep going safely, and more importantly, there are good reasons to go for it.

Several review articles on the topic note that an oft-overlooked benefit of exercise during pregnancy is improved mental health. “At first I was like ‘okay, I guess I won’t be snatching 240 pounds any time soon,’ but that’s a big part of your identity,” explains Quiana Welch, a Crossfitter and Olympic weightlifter who holds the American record for the snatch. “If you were top in your sport or close, and suddenly you’re pregnant and you’re like, ‘I can’t do any of this anymore,’ that’s hard.” Welch, who is due in June, has been an athlete her whole life. So even though her first trimester was tough—she was tired all the time and barely sleeping—she stuck with exercising. Now she squeezes in some lifting whenever she feels she has the energy (which is admittedly easier than it is for most expectant parents, since she’s a coach at Black Iron Gym in Sparks, Nevada), and though she doesn’t push herself the same way she usually would, those workouts are essential to her mental well-being.

Even non-athletes get mental health benefits. One 2015 review of pregnancy and exercise notes that pregnancy makes those who have suffered depression more likely to experience it again, and that between 10 and 30 percent of patients get depressed during their pregnancy—more than in the postpartum period. Exercise is associated with a 67 percent reduced risk of prenatal depression.

And then there’s the weight. In the official 2019 recommendations from Canada’s Society of Obstetricians and Gynecologists, the panel notes that fewer than 15 percent of patients meet the 150 weekly minutes of physical activity recommended during pregnancy. This leads to a high percentage (it varies widely) of pregnant people gaining excess weight that is then hard to lose later on, they wrote, going on to note that “Concerns over harms have not been substantiated by research and the risks of not engaging in prenatal physical activity have not been adequately emphasized.” Maternal obesity rates have been rising over the past 30-odd years, and this may be driving the increase in complications like pre-eclampsia, gestational hypertension, and gestational diabetes mellitus. Physical activity during pregnancy reduces all of the odds of all of these conditions (by 41, 39, 38 percent respectively).

Plus, many of the concerns that obstetricians used to have—that exercise would increase the risk of miscarriage or preterm birth or low birth weight—haven’t been substantiated. In fact, studies suggest that strengthening muscles, especially in the back, could help reduce pain as your belly grows.

“We’re not just talking about a fit pregnancy, we’re talking about long term fitness and function,” says Battles. “I think weight-training wise, there’s just so much more benefit than there is risk. A lot of women can keep training by making modifications.”

If you’re pregnant and you want to keep lifting weights, you should absolutely listen to the advice of your doctors and trainers: there may be legitimate reasons you need to take it especially easy, or specific components of your usual workout routine that are genuinely unsafe. But if all you’re hearing is that pregnant people should not lift weights, full stop, then you should definitely seek a second opinion.

Is there a maximum weight I can lift safely?

A few people will try to attach a specific number to how much you should be lifting while you’re pregnant, but it’s really about you as an individual. “It’s such an arbitrary recommendation because lots of women have kids who are 30 to 40 pounds,” says Battles. “There’s zero evidence that lifting over any specific amount of weight is bad.” But that’s not to say that pregnancy is a time to hit your PRs. The goal is to stay active and healthy, not push yourself to the point of breaking. “Even if I keep trying to do things, I’m getting heavier and I’m tired,” Welch says. “Be cognizant of what feels bad, because every other week it changes. Just because you feel like you can do it, that doesn’t mean you should do it.”

Having someone who’s experienced, or ideally certified, in coaching pregnant athletes can help you determine what’s safe and healthy for you. “Pregnant women should also listen to their bodies,” says Michelle Motola, director of the Exercise and Pregnancy Laboratory at Western University. “If it hurts, stop the activity and do not continue, especially if weight training.”

What could happen to me if I overdo it?

Even though pregnant people aren’t delicate flowers, they are going through a vulnerable phase. And though preterm birth and the like don’t seem tied to weight lifting, there are some key issues that obstetricians and coaches alike worry about.

One aspect is just physical damage: Any activity where you could fall or a weight could smash into your belly is inadvisable. For weightlifters, that takes most Olympic lifts off the table because they involve moving the barbell quickly and close to your body. Welch says she stopped snatching (an exercise where you move the bar from the floor to above your head) immediately, and though she could do cleans (from the floor or your knees to shoulder level) for a while because the bar doesn’t stay as close to your body, she had to stop that quickly as well.

You should also take care not to strain your body in ways that weren’t previously an issue. “If an athlete is doing a back squat, a lot of the times we’re used to holding our breath at the top,” Battles explains. “But when you’re pregnant that increases intra-abdominal pressure not just on midline but also the pelvic floor.” That extra pressure can lead to a pelvic organ prolapse or a diastasis recti (where the left and right abdominal muscles separate).

Training at a very high level can also interfere with fetal oxygen supply as blood gets diverted to the active muscles. Small studies of Olympic-level athletes showed they could safely train up to about 90 percent of their maximum oxygen capacity (VO2 max), but above that point and their fetuses’ hearts slowed dangerously. Most amateur athletes aren’t able to monitor their blood oxygen levels as they exercise, so the rule of thumb is often that you should still be able to speak—maybe not easily, but to say full sentences—while working out.

There’s also some concern about the hormone relaxin, which relaxes joints to aid in the birthing process. It’s historically been held up as a reason that pregnant people should be careful not to overextend their joints, as they’ll be more flexible than usual. Battles hasn’t experienced many problems of this sort with her clients, but as athletes they’re probably tighter than the average person, which might mean their joints are less likely to grow loose enough to cause injury.

Beyond that, experts simply advise listening to your body and what it’s trying to tell you. “The problem is we don’t know what the effects might be on both the mother and fetus, so we err on the side of caution,” Mottola says, pointing out that no ethics board would even allow the kind of randomized controlled trial that could definitively test the limits of exercise during pregnancy. Even the International Olympic Committee’s in-depth analysis on exercise in pregnant elite athletes relied mostly on small studies and theoretical outcomes. It and most of the other advice out there amounts to this: do what feels good to stay active, and don’t push it too hard.

How can I adapt exercises?

Though you’ll probably have to eliminate Olympic lifts and pull ups and various other potentially hazardous exercises, there are plenty of lifts you can still do as long as you know how to perform the movement safely. Battles teaches her clients early on to stop holding their breath and bearing down on their pelvic floors. That often means also dropping some weight, since lifting heavier would necessitate bracing against your abdomen and pelvic floor.

For her part, Welch has continued to squat, deadlift, and overhead press during her pregnancy. “I usually give myself a certain percentage that I don’t want to exceed, or I put weight on the bar and if I feel like I have to brace or really concentrate or really set up, I won’t do that weight,” she says. “It’s about me being able to breathe throughout the repetition.”

All of that may change as she progresses, but the general theory holds: do what feels good. “You can adapt and modify the range of motion, the load, the strategy, the volume of reps,” Battles explains. “We don’t need to eliminate, it’s more about how can we make modifications.”