How does menstruation affect my muscle performance? 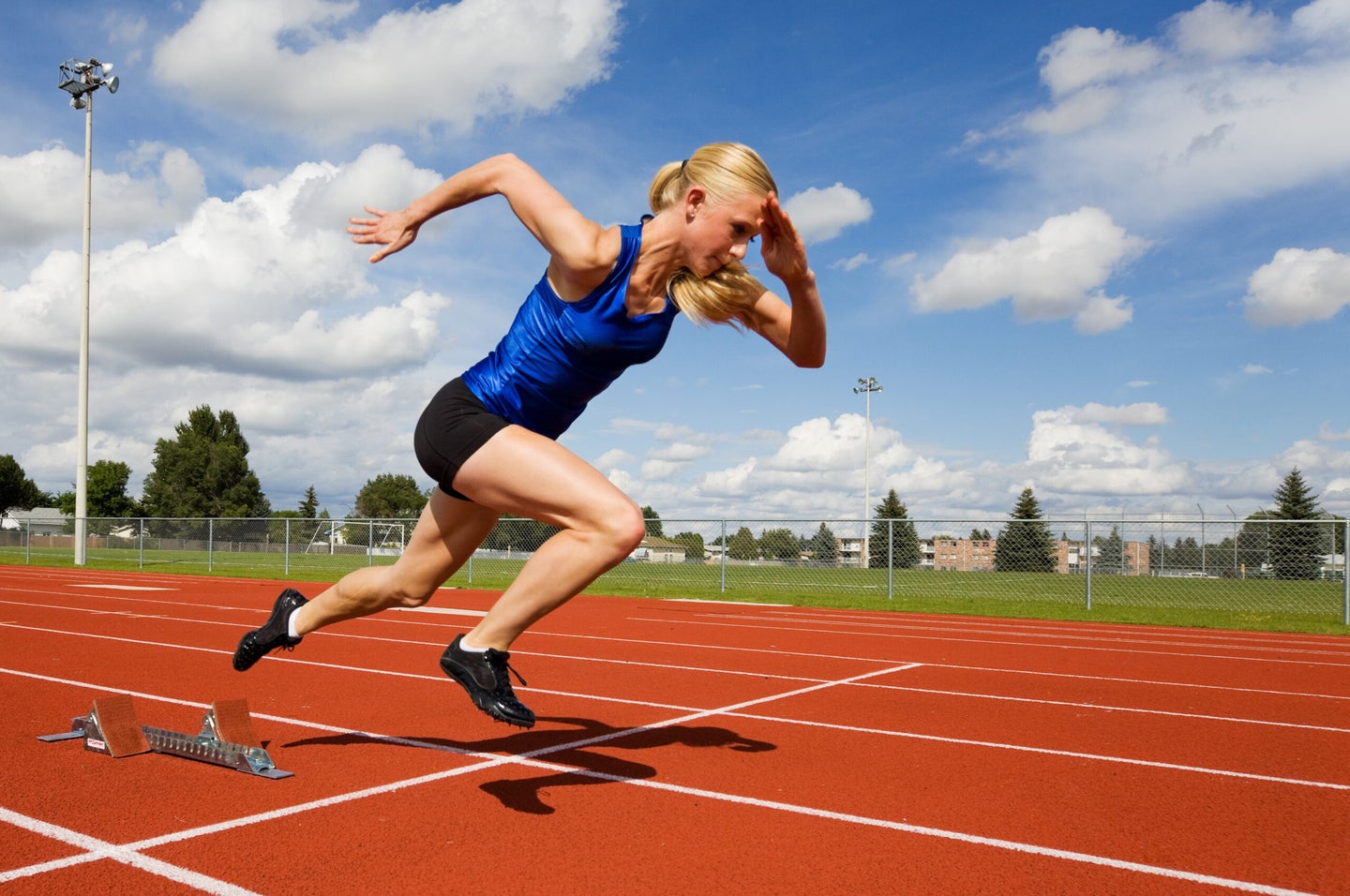 This story has been updated. It was originally published on January 31, 2019.

Halfway through training for my first marathon, I lost my period.

I wasn’t that surprised. It had happened before, once at the beginning of college and again in my early 20s. Each came at a time when I increased my athletic endeavors, but what surprised me most were the seesawing opinions of the medical professionals I told: One was extremely concerned, another not at all, and the third gave me the answer that inspired this article: “I don’t think we really know what the effects are yet.” How can that be?

This lack of research effort is surprising given that period pain in relation to performance is a frequent discussion topic among female athletes. But it’s one discussed among friends, in private discussions and group chats. That lack of information makes it difficult for anyone with a period to understand how it affects their body every month. More research is slowly emerging, but it’s been a long road.

Some of the earliest rigorous studies done on muscle performance took place in the 1940s, 50s, and 60s, and they generally excluded women, assuming that men were easier to analyze precisely because researchers (incorrectly) assumed they didn’t have significant hormonal cycles. It was also assumed, somewhat contradictorily, that they could easily serve as a proxy for women. That meant up until the last few decades, little to no research existed on how a woman’s monthly hormonal cycle affected her muscular or overall athletic performance. Studies on the topic are still scarce, but researchers have begun to draw some conclusions based on the early results.

[Related: Menstrual cups were invented in 1867. What took them so long to gain popularity?]

What effect these hormonal fluctuations have on muscle performance is far from clear. “I think a subset of women will say that they don’t feel as well right before they get their menses, and that certainly can affect athletic performance,” says Andrea Dunaif, an endocrinologist at the Mount Sinai Hospital in New York. But there isn’t actually much data on what the hormones themselves do to muscles.

Though information is scarce, no studies have found any major changes in metabolism or exercise capacity during the menstrual cycle (at least in these extremely controlled lab settings), but there could be some subtle differences. In particular, says Georgie Bruinvels, a research scientist with a PhD in sports and exercise science at Orecco (and an elite distance runner herself), we know that there are receptors for estrogen and progesterone in various parts of the body, including the muscles. For example, the anterior cruciate ligament, also known as the ACL, has a number of estrogen receptors that can influence our biomechanics depending on how much estrogen is circulating. During the follicular phase of the menstrual cycle, as estrogen levels are increasing, some studies have found an increased risk of ACL damage, however, as one review points out, the strength of the evidence is low.

Researchers know that neuromuscular performance does shift at various points throughout the menstrual cycle, as do metabolic states. In the first half of the menstrual cycle, the follicular phase, you are in a more anabolic state, meaning that your body is more engaged with building and growing. For this reason, says Bruinvels, it might be more beneficial to do strength training then because your body will benefit more from it. In the second half of the menstrual cycle there’s a switch to a more catabolic state, meaning you are better able to utilize fat as an energy source. So, potentially, it could be better to focus on endurance training, in which you could utilize these fat stores, during this phase.

A more recent study used an MRI to image muscles at various points during the menstrual cycle and found that there was more fluid in the muscles during the second half, when progesterone levels are highest. This makes sense, says Dunaif, since progesterone causes fluid retention. That bloating, along with mood changes that progesterone brings on, might also affect you in a less physiological way. “A subset of women get a premenstrual syndrome during their cycles from the effects of progesterone, including symptoms of weight gain and breast tenderness as well as irritability and mood changes,” she explains, “and that could theoretically affect athletic performance from more of a motivational standpoint.”

So how big of a difference does this all make? As Bruinvels and Dunaif point out, studies generally show that menstrual cycles don’t dramatically affect athletic performance; your muscles will perform more or less the same all month. But your muscular system might be better adapted to certain types of training at different points during your cycle.

[Related: Why Do I Poop More When I Have My Period?]

On the flip side, intense athletic performance can also affect and disrupt the hormone cycle, particularly in endurance sports like distance running, as well as gymnastics and figure skating. The absence of a period, known medically as amenorrhea, has more scientific research behind it, though the exact mechanisms that give rise to it still aren’t entirely clear.

The key mechanism is stress, which acts on the pathway that drives progesterone and estrogen production—specifically via the gonadotropin releasing hormone (GnRH), which gets secreted by the hypothalamus in the brain. An uptick in this hormone triggers the secretion of two other hormones, follicular stimulating hormone (FSH) and luteinizing hormone (LH), which in turn regulate the release of progesterone and estrogen. But stress—any stress—can suppress the release of GnRH, thereby suppressing the amount of estrogen released and stalling a period, sometimes indefinitely.

Any physical stress, whether it’s from excessive exercise, psychological burdens, insufficient calorie intake, or even just travel, can mess with this pathway. In the specific case of excessive exercise, Dunaif says, endogenous opiates (also known as endorphins, which give rise to a “runner’s high”) might be involved, though more research is sorely needed to know for sure. An increase in endorphins, which happens when you exercise frequently, might directly suppress the hormones involved in this pathway. In fact, she says, some studies have found that if you give athletes with amenorrhea an opiate antagonist like naltrexone, a subset of them will see a return of their menstrual cycles. But not all of them will. Often a loss of menstruation is multifactorial, so all of those stressors may need to be addressed to gain back a period.

How strongly each of the stress factors come into play is still not completely understood. While much of the blame in recent years has been placed solely on an athlete’s weight, both Bruinvel and Dunaif both agree that the issue is almost always multifactorial and highly individualized. The degree and types of stress that people’s bodies can handle varies a lot. “Endurance athletes often have a perfectionist nature,” says Bruinvels. “And that means that they can be highly stressed individuals, which often predispose them to this even more.”

Just as unclear are the health consequences, both in the short and long term. Research shows that estrogen is beneficial to women’s health. Not only does it allow for a normal menstrual cycle, but it also plays key roles in bone, liver, and skin health as well as promoting proper heart, metabolism, and cognitive functioning.

Studies on the shorter term effects show that amenorrheic athletes tend to have an increased risk of developing stress fractures, which are tiny cracks in a bone caused by repeated stress. The science is a little murkier for long term outcomes, but that’s mostly because there haven’t been any studies on how prolonged amenorrhea affects bone health over decades, says Bruinvels. While there have been many case studies of athletes who have experienced years, or even decades, of frequent amenorrhea who gained their menstruation back and became pregnant, we still don’t know what their bone health will be like when they’re in their 60s, 70s, and 80s.

At Orecco, Bruinvels helped lead the development of an app called Fitrwoman, which allows people who menstruate to track both their cycles and their training in one place. In doing research during the app’s development, Bruinvels found that about half the women she surveyed stopped exercising because of their periods. With a better understanding and more available science-backed resources, like her app, she is hoping to bring that percentage down. “One of the key things is actually breaking the barriers and breaking the taboos so people can talk about it and address it.”

For now, athletes concerned about losing their periods should talk to their doctors. A physician can help you pinpoint the mechanisms at play, and suggest changes to ensure you’re performing at your best.