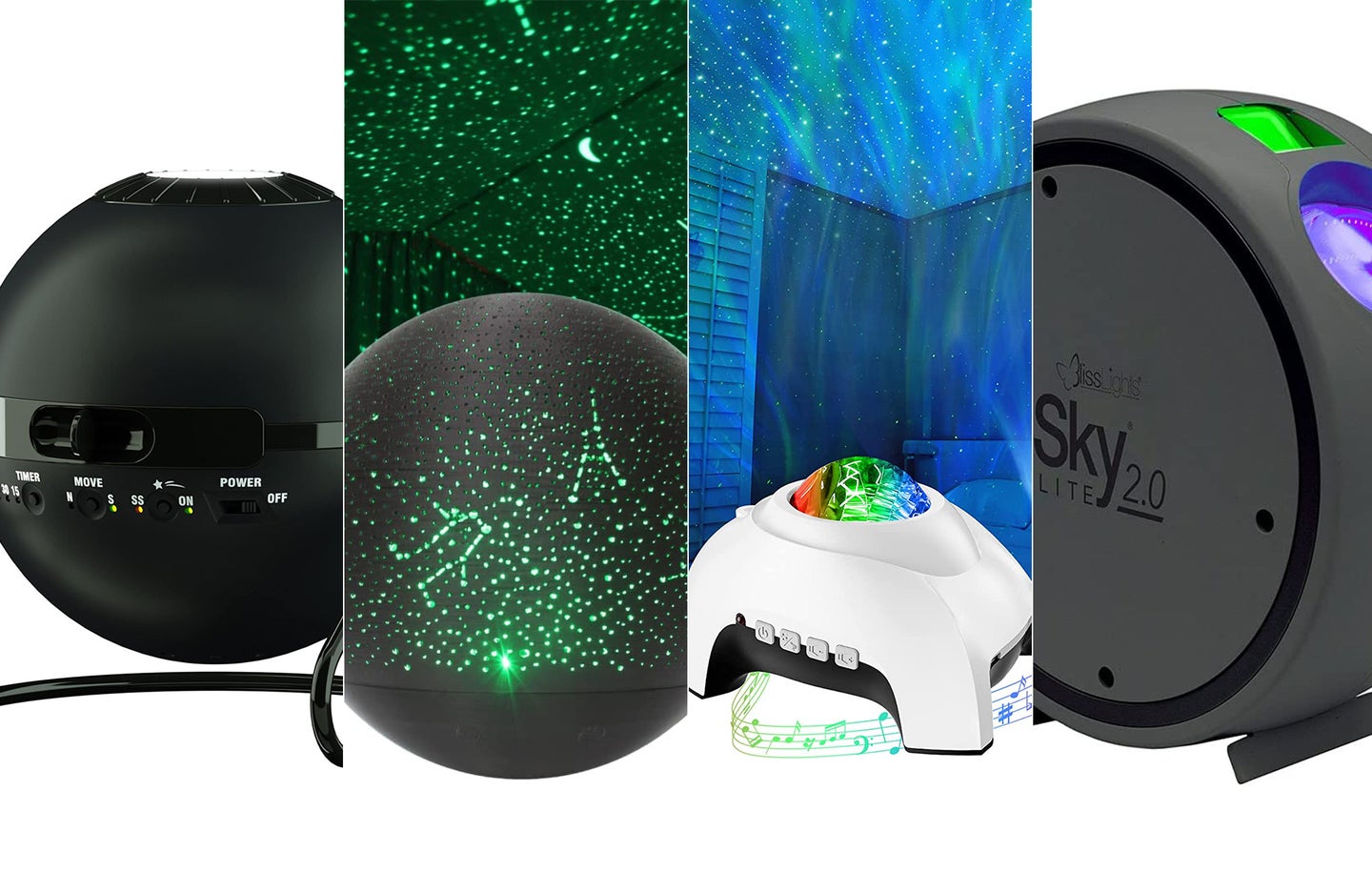 A light show billions of years in the making beams into your home.

Beyond a few bright celestial objects, the rise of light pollution has made it difficult for most people to experience a genuinely starry night sky—that’s where star projectors come in. If artificial lights have obscured your view of the Milky Way, these compact devices provide a fun and comfortable way to observe the cosmos. All you need is a dark room and a power outlet and you’re ready to bask in the wonders of the universe. Many also function as night lights or pattern projectors that can spruce up a room without the celestial theme. While nothing can replace the awe-inspiring feeling of seeing millions of stars in person, the best star projectors can still leave you transfixed.

How we picked the best star projectors

I’ve been fortunate to visit areas less affected by light pollution, so I know what it’s like to gaze upon the grandeur of our galaxy. As an editor at TechnoBuffalo, I visited NASA’s Jet Propulsion Lab in Pasadena, Calif., to learn about the Mars rover. I also took a guided tour of the Goldstone Deep Space Communications Complex, where I saw enormous satellites used to communicate with faraway spacecraft. Over the last 10 years, I’ve written about gadgets and space for outlets like CNN Underscored, TechnoBuffalo, and Popular Science, and this guide, in a way, allows me to write about both. If you’re searching for a projector for movie night, you’re in the wrong place (though we do have a guide for the best projectors for indoors and outdoors). But if you enjoy the stars of the sky as much as you do the stars of the screen, read on.

What to consider when buying a star projector

Generally, cheap star projectors are novelties that emit a mix of colorful swirling LED lights and class 2 lasers, which are low-power visible lasers—the same type used in laser pointers. While most models aren’t scientifically accurate, they do provide a fanciful escape and can even offer a calming experience. However, if you’re serious about astronomy and you’re willing to spend more, you can find a star projector that can turn your room into a personal planetarium.

Most models we researched offer features like brightness and color controls, image rotation, and an automatic shut-off timer. We found picking the right star projector is more about finding the experience that matches your mood. Are you looking for the cosmic color of nebulae? What about scientifically accurate constellations? Whatever you’re after, there’s a star projector for everyone.

You’d think that a star projector only projects, well, stars. But many of them are capable of covering the broad cosmic spectrum and can mimic everything from nebulae to auroras to constellations. As we mentioned, picking the right one is about capturing your interest and imagination. A projector that can cast a nebula or aurora is an excellent choice if you want to create a calming environment before going to sleep. A star projector that projects more scientifically accurate images is ideal for studying and educational use.

A good star projector uses an LED bulb and offers multiple brightness settings. While star projectors are most effective in a dark room, the models that project nebula and aurora make for great complementary lighting, such as during a party or movie night. They also make for good night lights and can help create a calming environment that encourages rest.

In addition to adjusting brightness, most star projectors offer different color settings, similar to smart light bulbs. Users can create a scene that fits their mood through advanced color settings and change it with the press of a button. A green aurora may be suitable for calm and tranquility, while yellow may be ideal for happiness and optimism. Most star projectors allow color adjustments through a controller or smartphone app and support millions of color options.

Star projectors generally offer different viewing modes: still and rotating. A projector that operates in still mode will cast light onto a surface and remain static. A projector with a rotating feature will put on a more dynamic light show by slowly rotating the lights. Many of the models we looked at are capable of switching between still and rotating modes.

Beyond simply projecting lights onto a wall, some star projectors include extra features like white noise, app support, and shutoff timers. Some models can even be synced with your music so that you can put on a cosmic light show. While these features aren’t necessary, they make specific models more appealing, especially if you intend to use a star projector in a child’s room, because it can act as a night light and white noise machine and then shut off after a few hours.

Whether you’re looking to liven up your space with colorful lights or follow in the footsteps of Carl Sagan, a star projector is a novel way to explore the cosmos. When making our picks, we found a balance between fantastical projectors, options for kids and adults, and a more scientifically accurate model that’s great for those who love astronomy.

Why it made the cut: Sega’s Homestar Flux features the most scientifically accurate images out of all the star projectors we picked.

Sega’s Homestar Flux is the closest thing to a planetarium if you’re a fan of astronomy and intend to use your star projector as an educational tool. It can project up to 60,000 stars at once and covers a circle with a 106-inch diameter. Unlike the other star projectors on this list, Sega’s model supports interchangeable discs, allowing owners to explore different parts of the universe in incredible detail. The Homestar Flux comes with two discs, the northern hemisphere and the northern hemisphere with constellation lines; it also supports additional discs that feature the Andromeda Galaxy, the southern hemisphere, and more.

These discs contain data from different missions of the National Aeronautics and Space Administration (NASA), the National Oceanic and Atmospheric Administration (NOAA), and the United States Naval Observatory (USNO). While Sega’s projector is pricey, it features the most scientifically accurate experience and is a must-have for would-be astronomers.

Why it made the cut: Rosetta’s Star Galaxy Projector has all the bells and whistles at a great price.

Rosetta’s Star Galaxy Projector has it all for those who want to add a galactic light show to their room. In addition to projecting colorful lights, this model includes a Bluetooth speaker and a white noise machine. It can also sync with your music and move the lights to the beat, making it a great party trick. The Rosetta Projector also offers other features we like, including a shutoff timer, brightness control, multiple speeds, and multiple colors so that you can change things up throughout the week. While the Rosetta Star Projector is more fantastical than realistic, its aurora-like lights still capture the gloriousness and mystery of space.

Why it made the cut: The Sky Lite 2.0 from BlissLights will help you set the mood with the right lighting.

The Sky Lite 2.0 from BlissLights is an excellent option for adults because it offers app support, brightness controls, and several lighting effects, making it easy to set the proper mood. While star projectors generally become the center of attention in whatever room they’re in, the Sky Lite 2.0 is excellent as complementary lighting, casting colorful auroras during dinner, movie nights, and parties. Additionally, the Sky lite 2.0 supports a rotation feature and a shutoff timer so that you can have your magical night under the stars before nodding off to bed.

Why it made the cut: This galaxy projector features brightness controls and a shutoff timer, plus it doubles as a colorful night light.

This simple galaxy projector features 21 lighting effects, a shutoff timer, brightness controls, and doubles as a night light. That way, you can find the right effect you like, adjust the brightness, and set a timer before bed. You can also toggle the lasers on and off, turning off the stars and letting the nebula-like effect lull you to sleep. The Galaxy Projector also comes with a remote, making it easy for kids to operate. Whether you want to inspire your kid’s imagination or keep them feeling safe with a night light, the Galaxy Projector is an excellent choice.

Why it made the cut: Infmetry’s Star Projector offers an array of features at an affordable price.

Infantry’s Star Projector casts 360 degrees of light through a precut dome, creating a night sky-like effect. This model also supports five brightness modes, a breathing mode, and four colors (white, yellow, blue, and green). There’s also a shutoff timer, so you can fall asleep with the projector on and wake up with it off. It’s not nearly as captivating as the other options on this list but, for the price, it’s a fun way to introduce someone to the wonders of the universe.

Q: How much do the best star projectors cost?

Star projectors can start at $10 and go up to the $150-$200 range depending on quality and additional features. For example, something that provides a planetarium-like experience will be more expensive than one that has constellations etched into the cover.

Q: Can I use a star projector on any wall?

Yes, you can use a star projector on any wall in your home. These projectors typically have a short throw, which essentially means they need to be relatively close to the surface they’re projecting onto (between 6-10 feet). We recommend pointing your star projector at a blank wall or ceiling so that you can enjoy the maximum effect of the colorful lights without distractions.

Q: Where should a star projector be placed in a room?

For an evenly lit ceiling, you should try to put the star projector in the center of your room. We realize that’s not ideal for most people, so any place you have an outlet is a good spot. There’s no wrong place to put a star projector, as long as it’s not too close to the surface it’s projecting onto. What works and looks best to you may not be the same for someone else.

Q: Are star projectors for kids and adults the same?

Star projectors are appropriate for any age and generally offer the same features or designs, whether for a kid or an adult. There are some variations if you do want one for a specific age group. For example, some models might come with imagery, such as an astronaut or spaceship, aimed at younger audiences. Meanwhile, projectors that offer scientifically accurate images might only appeal to adults or people who are enthusiastic about astronomy. If you’re purchasing a star projector for someone, you must consider their interests to get the most out of what you buy.

Q: Are star projectors good to use as night lights?

If the imagery and colors of a star projector make you feel more relaxed, then you should use it as a night light. While not their intended purpose, many models we researched feature brightness and timer settings, making them suited for bedtime use. Some also have built-in sound machines, which some people claim help them fall asleep and stay asleep.

Star projectors are a fun and affordable way to add bright, colorful lights to your bedroom. That said, most are nothing more than novelties and put on light shows that vaguely resemble nebulae and auroras. If you’re searching for something with more scientifically accurate imagery, you can find some excellent options if you don’t mind spending more money. Better yet, we recommend traveling to a place unaffected by light pollution and experiencing the feeling of seeing millions of stars in person.