People Want to Interact — Even with an Autonomous Car 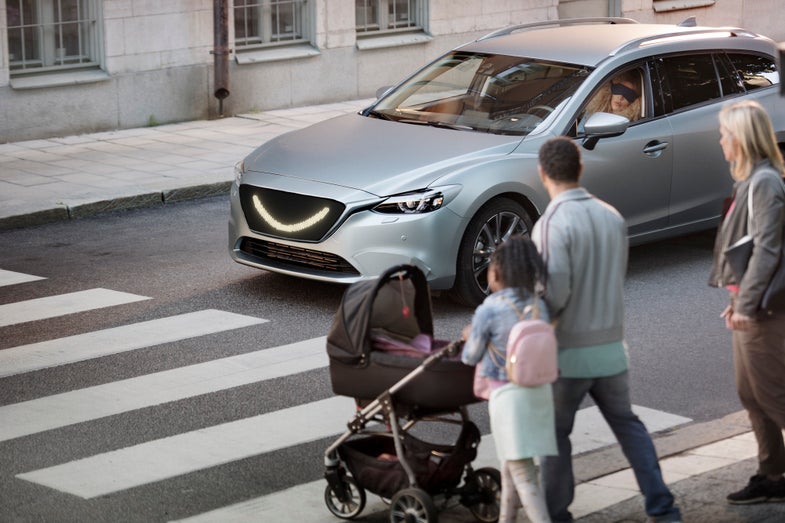 Semcon, a product development company specializing in how humans actually use things, conducted a study on people’s attitudes toward self-driving cars. People in Sweden, the United Kingdom, the United States, and Germany responded, and nearly half said they had very little trust in autonomous vehicles.

Here’s a clue why there might be so little trust: 80% of all respondents said that, as pedestrians, they seek eye contact with the driver of a car at an intersection before they cross. Self-driving cars don’t have eyes to contact or a nod of recognition to give. How do pedestrians know the sensors see them?

So Semcon tried an experiment. They rigged a car to seem as if it were autonomous, with a driver reading a newspaper in front of his face. (In fact, a second, hidden human was controlling the car.) Even though the car stopped for the pedstrians, they frowned and skittered across the street, uncertain of the car’s next move.

Semcon developed a prototype in response to this lack of pedestrian-to-car communication called the Smiling Car. A set of LEDs in the grilled light up a wide smile when the sensors pick up on a human, and the human then knows they’re seen. This is similar to the Mercedes-Benz F 105 Luxury in Motion concept, shown at CES 2015, which also had a light-up grille that could communicate with people outside the car.

It’s interesting that companies are already thinking along these lines. The NHTSA guidelines for autonomous vehicles that were just released on Monday state that companies working on highly autonomous vehicles (HAVs) “should consider how HAVs will signal intentions to the environment around the vehicle, including pedestrians, bicycles, and other vehicles.” It specifically mentions situations just like the one Semcon tested, when a vehicle recognizes a pedestrian and is waiting for her to cross before proceeding.