A red light for the program 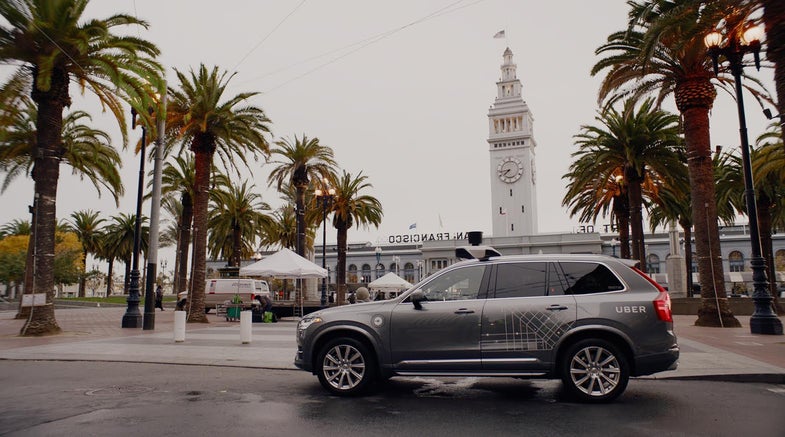 “Uber is a technology company” reads the legal disclaimer on the ride-hailing-app company’s website, a claim that is as defensive as it is aspirational. Right now, Uber has so many driver-partners (as the company prefers to term them) that “more people earn a paycheck–or part of one–from Uber than from any other private employer in the world except for Wal-Mart and McDonald’s,” according to Forbes. That’s 1.5 million drivers, a truly massive number of humans that Uber very openly plans to replace with robots.

But apparently Uber’s robots drive like jerks, according to California regulators who have called for the company to stop carrying customers in self-driving cars. When Uber rolled out its self-driving Volvo SUVs in California, it did so without the necessary permits. And then Uber’s self-driving cars ran red lights, and were recorded doing so.

That last car crossing in the gif? That’s an Uber SUV, with its sensor array visible on top of its roof rack. According to The Guardian, Uber claimed that the car running a red light was the fault of human error. To sort-of comply with local regulations, Uber includes a human driver/observer in the driver’s seat.

After Uber hired a team of robotics researchers from Pittsburgh’s Carnegie Mellon University, Pittsburgh became the first city where Uber tested driverless cars. These converted Ford Fusions carry a massive array of sensors, unlike the stripped-down array sported by the Uber Volvos in San Francisco.

In a blog post published before the videos appeared, Uber defended its choice to put driverless cars on the streets before getting full permitting.

Of course, in addition to catching actual problems with self-driving cars, these non-driving drivers can conveniently carry the blame when software goes glitchy. If the company is ever to realize its ultimate dream—autonomous cars, summoned by riders, without any drivers on the payroll—Uber will have to lean on its human employees to prove the technology actually works.