Digging up dirt on soil moisture across the globe 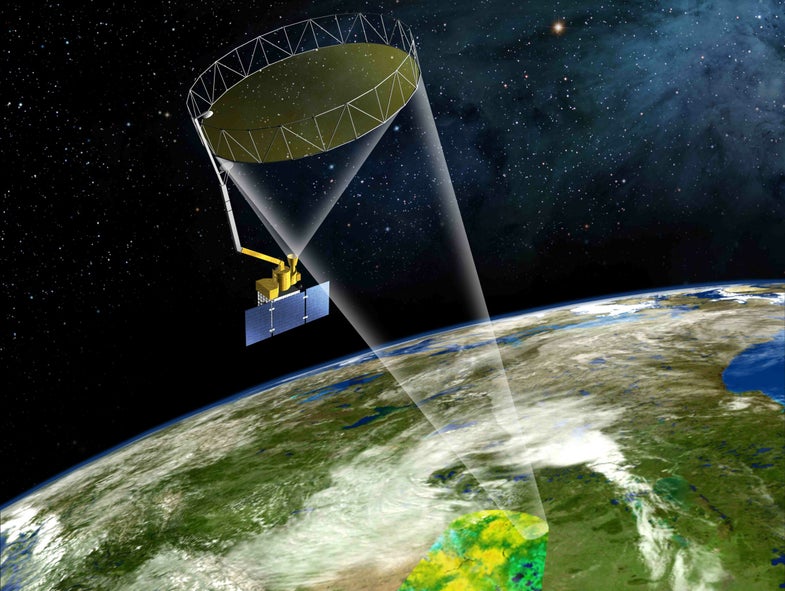 When it launches on January 29, a new satellite’s mission will be simple: to measure one of the most important but least recognized sources of water on Earth. NASA’s SMAP (Soil Moisture Active Passive) will measure soil moisture across the globe. That may seem like a simple enough concept, but its findings could have a huge impact, from preventing droughts and the spread of disease, to predicting the effects of climate change.

“Most people don’t think about the water under our feet,” says Simon Yueh, SMAP’s lead project scientist at NASA’s Jet Propulsion Lab. “They take it for granted, but it’s a key part of our water cycle. SMAP will help us by understanding the changes in the weather and the changes happening in our climate.”

SMAP’s predecessor, the European Space Agency’s SMOS (Soil Moisture Ocean Salinity) launched in 2009. “SMOS has been successful,” Yueh tells us, “but is limited in the details it can provide because its one instrument, a radiometer, is limited to a 25-mile resolution.” This is where SMAP will surpass Europe’s satellite and become the first Earth orbiter of its kind.

To get the most accurate, high-resolution soil moisture data ever obtained from space, SMAP will combine two instruments: a microwave radiometer (just like on SMOS), and radar. The radiometer is great for capturing the big picture; with a 25-mile range, it collects a broader set of data, perfect for taking climate snapshots and making more accurate weather forecasts. The NASA-designed radar, on the other hand, has a high-resolution range of 1 mile, providing an extremely detailed view of what is happening from a few centimeters to a meter underground.

How does SMAP measure moisture? It’s pretty clever actually. The Earth naturally gives off a small amount of radio waves as its electrons and ions bounce around and collide. SMAP receives the radio waves emitted from the Earth. While the science is more complicated, essentially it works like this: The more water in the soil, the weaker the radio signal, while soil with less water gives a stronger signal.

Soil moisture might not get much recognition, but the water content in the Earth plays a vital role in our water and carbon cycles. Really dry soil prevents rain clouds from forming, exacerbating the effects of drought. And if there isn’t enough moisture in the soil, seedlings won’t take root and no food is produced.

Part of SMAP’s job will also be to detect whether soil is thawed or frozen, helping to better specify a region’s growing season. Serving as the ultimate “farmers’ almanac,” this particular data will help inform farmers of the ideal planting and harvesting times for their crops.

The ultimate “farmers’ almanac,” SMAP data will inform farmers of the ideal times for planting and harvesting crops.

The data will let also climate scientists know how our carbon cycle is working. Normally, plants pull CO2 from the air and break it into carbon and oxygen; the oxygen gets exhaled, and the carbon gets stored in the roots. Plants can thus act as a “carbon sink” in the carbon cycle. When they’re frozen, however, they stop absorbing CO2. Other times, when there’s a lot of water in a soil, it stimulates plant growth, causing the plant to actually release CO2 instead of storing it. By compiling data on these carbon sources and sinks, SMAP will allow scientists to test and refine current climate models, ultimately improving their ability to predict the impacts of climate change.

Another potential benefit of measuring soil moisture becomes instrumental in locations like sub-Saharan Africa, where deadly diseases such as malaria are rampant. Monitoring the moisture in the soil and understanding the mosquito breeding grounds could allow disease control officials to identify high risk areas and keep people away from those locations.

Eventually, Yueh says, when missions like SMAP become more common, people will be able to use soil moisture information like a daily weather forecast. “When people go outside for the day, they’ll automatically check the SMAP data and will know whether it’s a good day to go dirt biking or plant their tomatoes—that’s the hope.”