Anyone with a 3D printer can lend a hand 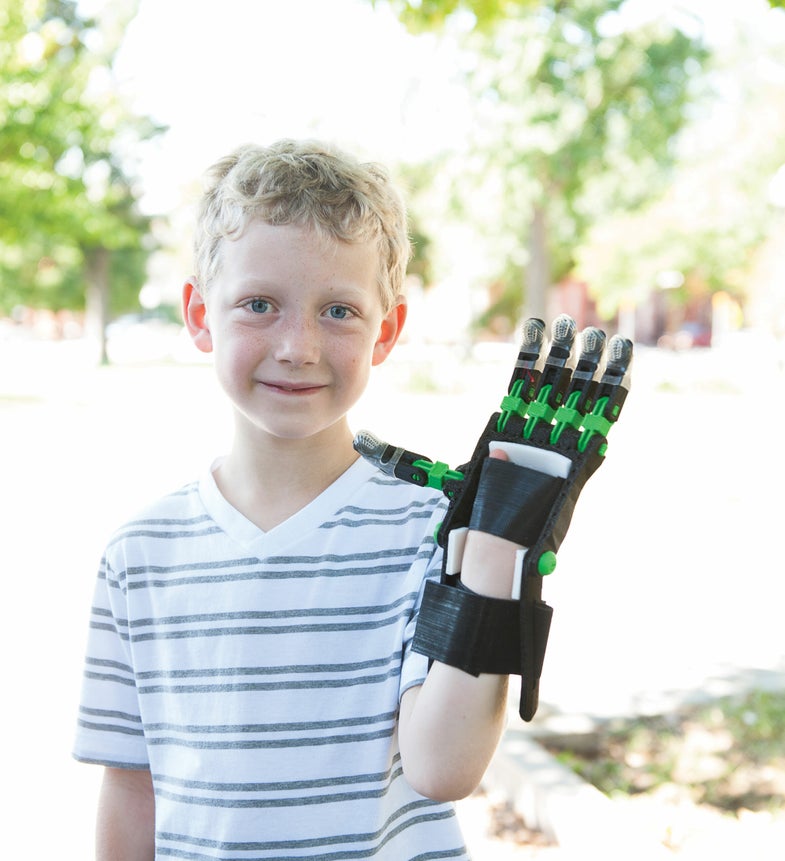 One in 1,500 children is born with a partially formed arm, but for every prosthetic device received, hundreds of others go without. Many families simply cannot afford a prosthetic, which often costs thousands of dollars. Others find that, after shelling out for a fancy new hand, it performs poorly, or the child quickly outgrows it.

Now, a massive volunteer-driven movement is striving to solve that problem by creating cheap, durable 3-D–printed hands. Coordinated by a group called e-NABLE, the effort has so far distributed more than 400 plastic hands, which come in a range of colors and go by names such as the Raptor Hand and the Cyborg Beast, to children and adults in need. Interest has grown exponentially: e-NABLE’s Google Plus community boasts about 3,000 members and is growing at a rate of roughly 4 percent per week. “We’re putting artificial hands in the hands of the people,” says Jon Schull, a research scientist at the Rochester Institute of Technology, and founder of e-NABLE. “There are opportunities for everyone to get involved—from hardware geeks to parents to kids.”

Schull first heard about the prosthetics problem at an innovation conference several years ago. In two back-to-back sessions, engineering professors described assigning senior projects in which students built a custom prosthetic for someone in need. “The client had a new life-changing device, and the student had a heartwarming experience,” Schull says. The designs for building the prosthetics, however, “ultimately went into a filing cabinet.”

Schull began to lobby for a multiuniversity, multidisciplinary consortium to create and promote similar prosthetics, but bureaucracy stymied his efforts. “It’s almost impossible to get universities to agree with themselves, let alone each other,” he says. So two months after beginning the campaign, he gave up.

In spring 2013, however, a fortuitous YouTube video reignited Schull’s interest in the idea. The video featured Richard Van As, a South African carpenter who had accidentally cut off his fingers. Van As described how he built his own 3-D–printed prosthetic fingers with the help of an American special effects expert. In the video’s comments, Schull asked anyone who had a 3-D printer and was interested in making a hand, and anyone who needed a hand, to reach out. Within weeks, he had 70 volunteers.

That was all the encouragement Schull needed. He soon created e-NABLE, which provides resources for printing hands, and connects volunteer makers with those in need of prosthetics. The process of creating a hand is relatively straightforward: The recipient enters his or her measurements into e-NABLE’s free “Handomatic” software. Based on this information, a 3-D printer can easily churn out the necessary plastic parts for a fitted version of a tried-and-true model like the Raptor Hand. With a little more effort, makers can create their own specialized hand designs.

To work, the hands rely on simple technology: Strings running on the underside of the fingers are attached to a wrist gauntlet. Those strings act as tendons that open and close the fingers when the wrist bends. Once printed, assembly takes just three or four hours.

The hands have enough precision for some wearers to pick up a spoon and eat cereal. Some members of e-NABLE are even creating unique models designed for specific uses, such as holding a baseball mitt. For many children, however, the hands are more than functional aids—they’re a game-changer for how to approach the world.

“Luke used to be shy about his hand and sometimes hid it behind his back,” says Gregg Dennison, father of eight-year-old “Little Cool Hand” Luke, who was born without a left hand. Dennison saw a story about 3-D–printed prosthetics on CBS evening news and realized that Luke might benefit from such a device. Dennison’s searches eventually led him to e-NABLE. Inspired, he purchased his own 3-D printer and learned to make specially tailored prosthetics for his son. “Now, Luke shows off his 3-D–printed hand at school,” Dennison says. “It really boosted his confidence.”

“An amazingly large number of people could really use an artificial limb.”

In addition to improving people’s lives, Schull hopes that e-NABLE will ignite an interest in science and DIY. “We’re making makers as well as making hands,” he says. One such newly minted maker is Aaron Westbrook, a sophomore at New Albany High School in Ohio. Westbrook was born without a right hand and he’d had a bad experience with a prosthetic that soured him on the technology. “It wasn’t functional, and it was really heavy,” he says. “I hated it.”

The hand wound up in the back of Westbrook’s closet around the same time that e-NABLE started showing up in his news feeds. When his school got a 3-D printer last year, Westbrook didn’t hesitate to approach the technology instructor. “He was like, ‘Well, if you can get the files, I’ll print the hand for you,’” Westbrook recalls. “I was like, ‘Can you say that again!?’”

The school paid to print a Raptor Hand model in blue, using a grant it received for 3-D–printing projects. But when he assembled the hand, Westbrook realized he couldn’t use it properly. “I don’t have enough of a wrist, which is required to move the Raptor in order for it to function,” he says.

Luckily, e-NABLE has a design called the RIT Arm, created for limb differences like Westbrook’s. In addition to printing the new model, Westbrook hopes to start a non-profit of his own, which will let him design his own artificial hands. He’s chronicling his experiences on his blog, Alive with Five.

Schull has big plans for the future as well. He’s now focused on improving the hands’ designs—for example, creating more prosthetics for people who lack wrists, like Westbrook—and on getting the devices to those most in need. To that end, he recently visited Johns Hopkins University to discuss potential collaborations with experts there, and he is planning a mission to Haiti.

“It’s a big world, and there’s an amazingly large number of people who could really use an artificial limb,” Schull says. “We’ve delivered only a very small drop in a very large bucket, but we want to scale that up.”

Correction, 2015-02-13: An earlier version of this article incorrectly stated that Westbrook’s school had lost funding for its 3-D printing program. In fact, the school was concerned about how much material Westbrook’s 3-D–printed model would use, which required further investigation of his project before it was approved.

This article was originally published in the February 2015 issue of Popular Science, under the title “Let’s Give The Kids A (3-D-Printed) Hand”. It has been expanded for the web.