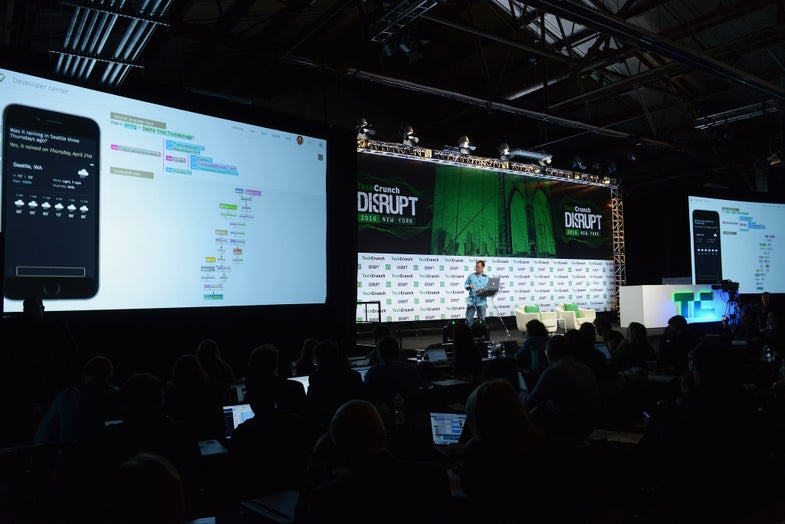 “Bots are the new apps,” said CEO Satya Nadella at the Microsoft Build developers’ conference in late March. Wittingly or no, he set the stage for one of Silicon Valley’s biggest battles in decades.

Within two months, Facebook and Google announced intelligent assistants, joining the ranks of Apple’s Siri, Amazon’s Alexa, and Microsoft’s Cortana. Apple recently announced plans to open the Siri software development kit to third-party developers, and showed off a much smarter Siri at the Worldwide Developers Conference this month.

Viv launched in the midst of the fray, a highly-anticipated AI assistant and one of Silicon Valley’s most secretive start-ups. At Tech Crunch Disrupt in early May, co-founder and CEO Dag Kittlaus debuted the app, using Viv’s natural language capabilities to do nifty things like check the weather and send a Venmo payment. At the Pioneers Festival in Europe last month, Viv co-founder Adam Cheyer—who, along with Kittlaus, built Siri before selling it to Apple—pushed Viv harder. One convoluted request from Cheyer: “Get me a window seat on a one-way nonstop flight from JFK to SFO three days after next Friday.” Viv pulled up options in less than a second. The crowd was impressed.

Within Silicon Valley, natural language recognition is regarded as the next frontier of user interface. Just as the rise of browsers and search 25 years ago reshaped the flow of information and money online, so too might artificial intelligence and natural language recognition; but whether that actually happens or not remains to be seen. Much to the chagrin of most start-up founders, true paradigm shifts are rare in consumer technology. They occur when a company builds a user-friendly system or product flexible enough to match a broad range of demands to a diverse supply of products and services. See Amazon or Apple’s iPhone and App Store as exhibits one and two.

Digital assistants aren’t ready to disrupt quite yet. The technology has reached utilitarian stage (What’s the weather today?) and novelty stage (Can you beat box for me?), But more often than not, users find themselves pressing up against an AI assistant’s limitations rather than discovering its possibilities. For example, Siri can help you make a dinner reservation. That’s great, but try getting her to change that reservation 30 minutes later from four diners to six, or from 7:45 to 8:15. Not a chance.

Along comes Viv. Viv is pretty guarded about its technology and partners, but it is clearly different than its competition. Viv listens to what you actually want it to do with natural language processing, and looks through all of your apps and services to put together the complex response you asked for. Also, it will remember your requests. That dinner reservation? Viv will go back and change it if you like. This stands in contrast to Siri, Cortana, Alexa, and Facebook M, which for the most part act within their walled gardens. Google’s proposed assistant might work across different platforms and devices too, but we’ll have to wait until later this year to see.

For now, the company is still being pretty choosy about its beta partners, the apps and businesses that Viv will be able to access. They have about 50 right now—think payment, food, and flower delivery services, ticketing agencies, music services, automakers and so on. But Kittlaus is adamant that at launch, likely late this year or early next, Viv will be open to the multitudes.

When you add up those attributes, Viv has some clear advantages over other assistants. Kittlaus said to me, “We’ve spent three-and-a-half years working through problems the other guys don’t even know they have yet.” Yet no one, Kittlaus included, is blind to the significant hurdles that lie ahead.

Viv’s competition consists of the world’s largest technology companies and other formidable start ups, like Hound. Those big companies already command something Viv desperately needs: audience. Without audience, developers won’t make new stuff for Viv. But without new stuff, no one will use Viv. The only way through that catch-22 is to make a product orders of magnitude better than the competition. That’s very, very difficult.

The competition has made Viv extremely reticent to talk to the press. Kittlaus has only done a handful of interviews since founding Viv, and at the Pioneers Festival, he turned down every request but ours. Kittlaus could not contain his enthusiasm for a product he sees as heads-and-shoulders above the competition. Before too long, he had his phone out – “I really shouldn’t be doing this but…” – and was running me through demos on the fly.

Seated in a loud and crowded room in Vienna, Kittlaus ran Viv through its paces. He kept things pretty basic: What was the weather like the day I was born? (Sweltering with a few thunderstorms, just as my mother said). Could it book a one-way flight from Vienna to SFO the next day (Yes, for $447 one-way, “Shall I purchase it for you?”). It only failed once: It could not retrieve the weather for another person’s birthday, probably because the records have not been filed.

The demos were cool—and they would have gotten better if we’d done things like bought the plane ticket only to change it a few moments later. But perhaps more important, Kittlaus opened up about his broader vision for Viv. Kittlaus says he means to do much more than introduce yet another intelligent assistant into the world — He’d like Viv to become a new standard, like WiFi or USB. It could stand as a symbol for intelligent conversation with anything, and, if the stars align, it could redefine our relationship to machines in ways few have yet to imagine.