Google Assistant won’t replace Siri on the iPhone, but you should download it anyway

There's a virtual assistant party going on in iOS. 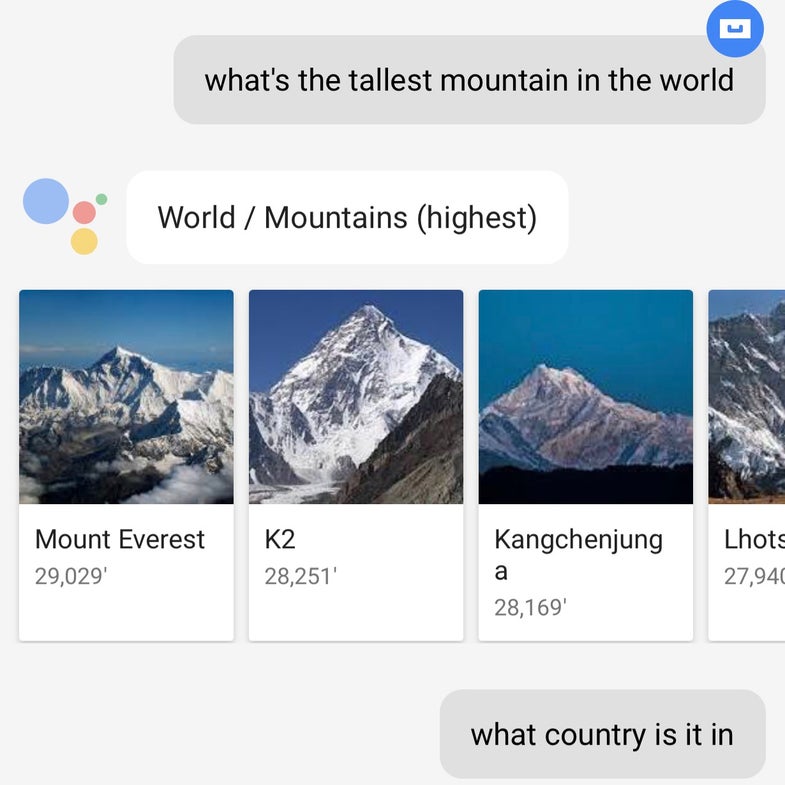 After an announcement Wednesday at Google I/O, the Google Assistant is now available on iPhones in the United States. The tool shares space with Siri—relegated to being a smart sibling who’s not allowed to come out and play as much as you want it to.

Unlike Siri, Google’s disembodied intellect is trapped in an app that you have to download and open to use, making accessing it a more indirect experience. But it’s one that’s worth exploring.

We first met Google Assistant a year ago when it debuted alongside the Google Home devices. Since then, it has already made its way onto more than 100 million gadgets, so chances are you’ve already interacted with it in some form or another.

This new app channels the same artificially intelligent brains, just on your iPhone. You can’t summon it with a “Hey, Siri,” but you can at least set a shortcut to the Assistant on the widget screen on the phone. Swipe right on the home screen until you see your widgets, then click “edit” at the bottom to add the Assistant.

So what’s the point of having it on your iPhone?

It’s a voice assistant, but also a chat bot

You can talk to the Assistant within the app by pushing the microphone icon. But if you’re in a quiet coffee shop and feel weird shouting at your phone, you can text it as you would a person. Type in “How are you?” and it will reply—and also present you with some ideas of things it can do, like “Show me my emails.” Click on that button, and it pulls up your most-recent Gmail messages. If you’re sick of typing, click on the microphone button to speak to it again the old-fashioned way, and, for example, ask it to send an email for you. (The Google Assistant was already available as a chatbot on another Google app, the messaging application Allo, which Google announced at last year’s I/O conference.)

It excels at giving you information

The Assistant sometimes outshines Siri when you just want to know things, making it feel conversational—in a fun knowledgable way.

If you ask the Assistant about what the tallest mountain in the world is, it will not only show you a picture of Everest and tell you its elevation, but it will also display other cloud-scrapers, like K2 and Kangchenjunga. When you ask the Assistant what country the peak is in, it tells you where Everest is: Nepal, Tibet, and China. OK, we realize Tibet isn’t a country, but that’s still a good contextual response.

Ask Siri the same question about the world’s tallest mountain, and she’ll show you information about Mt. Everest. But then pester her about its country, and she’ll search the web for “What country is it in’.” Siri might be easier to access, but Google Assistant may save you clicks in the long run by giving you better info.

Of course, the Assistant can stumble. I asked it for “dinner ideas for tonight,” and it started rattling suggestions from a web search. When I told it to stop, it heard “top,” and returned information for T.O.P., a South Korean rapper. On the plus side, now I know who T.O.P. is.

It’s less connected to your iPhone than Siri

The Google Assistant, unsurprisingly, works with other Google apps on your phone. Ask it “how do I get home from here?” and it will automatically launch Google Maps. Ask it to show you photos of dogs that you took, and it will search your Google Photos, if you use that service. (A couple cat photos snuck in, so it’s obviously not perfect, at least as of right meow.) Siri can do stuff like that too, but instead of searching Google Photos, it’ll look in your native camera roll app.

The experience is similar with music: I asked Siri to play Lady Gaga, and it started playing “Alejandro” right away. The Google Assistant did the same from within the app, but the first time I had asked it to play music, it asked me which app to use: YouTube or Apple Music.

Like Siri, you can ask it to set a timer, but the timer will count down from within the Assistant’s app, and not from Apple’s clock app, making the Assistant its own little intelligence hub in your phone.

There are also some critical limitations. It’s not allowed to use the iPhone’s camera. If you ask it to call someone, it can, but the iPhone will first present an alert asking if you want to actually dial that number or not; asking Siri to make a call skips that alert. Ask Siri to launch Twitter, and it will open the app; ask the Assistant, and it launches Twitter on Safari, which is annoying.

Ask the Assistant how many steps you’ve taken so far today, and it doesn’t know what to do. Siri will at least ask you if you want to launch the Health app to take a look.

Yes. It’s free, it’s fun to use, it’s powerful, and, while it’s not perfect or incredibly convenient, it’s a reminder that tapping into a cognition other than Siri’s is as easy as opening an app.

Assistant isn’t going to take over for Siri, but at the same time, it is going to be tied into more things in the future—like LG appliances, or Wi-Fi-equipped Roomba vacuums—so if you’re an iPhone user, the app is a great way to get to know what could make for a dorky new friend.