Explore Chemistry Like Never Before, Inside A Minecraft World Of Molecules

There’s no better way to get inside an amino acid 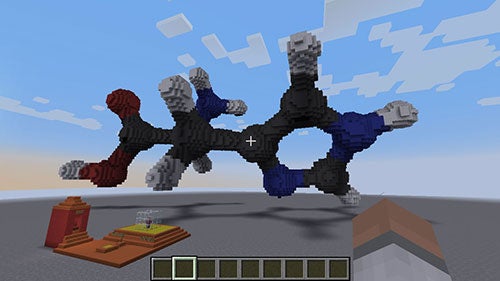 Inside the protein myoglobin

Minecraft, which allows players to have free rein of a seemingly endless landscape ripe for construction, is the top-selling standalone game of all time. It’s popular with enterprising adults, who have built such things inside the game as a working computer hard drive or the entire country of Denmark. But Minecraft is also great for kids, and teachers all over the world have started incorporating it into their curriculum for subjects like math and history. Now researchers at the University of Hull in the United Kingdom have released a Minecraft world designed specifically to teach children about biochemistry.

The world, called MolCraft, allows students to explore some of life’s most essential proteins in a novel way. From a central hall, players are teleported to 3D renderings of proteins that show the molecules’ structure as well as their atoms and chemical bonds, just like a traditional ball-and-stick model. But in MolCraft, you can zip around the proteins, discovering their internal contents and architecture accompanied by explanations about their function. Take myoglobin, for example—most of the protein is a twisty molecular chain, which might prevent students from discovering the iron atom at its center. The world is littered with treasure chests to keep students clicking, giving the exploration a more game-like quality; some contain books that provide mini-quizzes so students can ensure that they’ve learned all that MolCraft has to offer. A separate space also contains a map of the United Kingdom that depicts the Royal Society of Chemistry’s landmarks, which provide a bit of insight into the country’s history of chemistry.

A Histidine molecule in the game

, or can connect within Minecraft to the server

. In the near future the researchers hope to share MolCraft with educators and allow students to explore the proteins with greater complexity,