Where To Watch Microsoft’s Windows 10 2015 Event

Phones, tablets, and HoloLens could be on the horizon 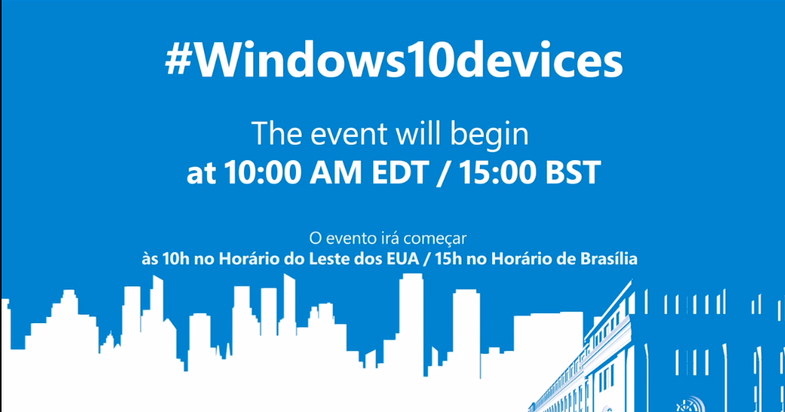 Microsoft is gearing up to begin their Windows 10 event. Taking place on October 6 at 10am EST/1pm PST, Windows fans can look forward to new phones, computers and possible even more. There’s even a chance we could see announcements related to the HoloLens. You’ll have to tune in to find out for sure.

Microsoft will livestream their #Windows10devices event here. Those who aren’t on the ground in New York City can tune in and watch the video. As mentioned before, the event will begin at 10am EST/1pm PST. To see when the Microsoft Windows 10 event kicks off in your time zone you’ll want to check here. Along with desktop users, those on Microsoft’s Xbox can tune into the event as well.

The Band 2 could be Microsoft’s next wearable

Lumia Phones
The Lumia 950, 950 XL and 550 could be revealed by Redmond today. Coming hot off the heels of Google’s Nexus phone announcement, Windows Phone could see some new devices today.

The Lumia 950 is rumored to bring 5.2 inches of screen real estate with a quad-HD display. The phone will likely incorporate an iris scanner for securely logging into the phone and–like most Lumias–the camera will be formidable. We could see the 950 and 950 XL shooter to weigh in at 20 megapixels. The base model is rumored to start at 32GB.

The Lumia 950 XL will carry similar specs to its smaller counterpart. The main difference will be in the phone’s screen size: 5.7 inches instead of 5.2. The larger model could also see a stylus.

For those on a budget, the Lumia 550 could be Nokia’s latest affordable model. With a 720p screen at 4.7 inches, users may have to compromise on screen size for the cheaper price.

Microsoft Band 2
But isn’t just about phones. Microsoft’s wearable, the Band, could see a refresh as well. The next Band device–which many are calling Band 2–could bring a visual refresh. Fitness enthusiasts could receive added features like tracking of stair climbing.

VR Kit
Fans of HoloLens are expecting more details on VR Kit to be revealed as well. Whether or not we’ll see HoloLens itself will remain a mystery.

Make sure to tune in to the Microsoft Windows 10 event here. We’ll be bringing you updates live from the show as it’s happening. Stay tuned!