For The First Time, Waves Are Adding Power To The U.S. Grid 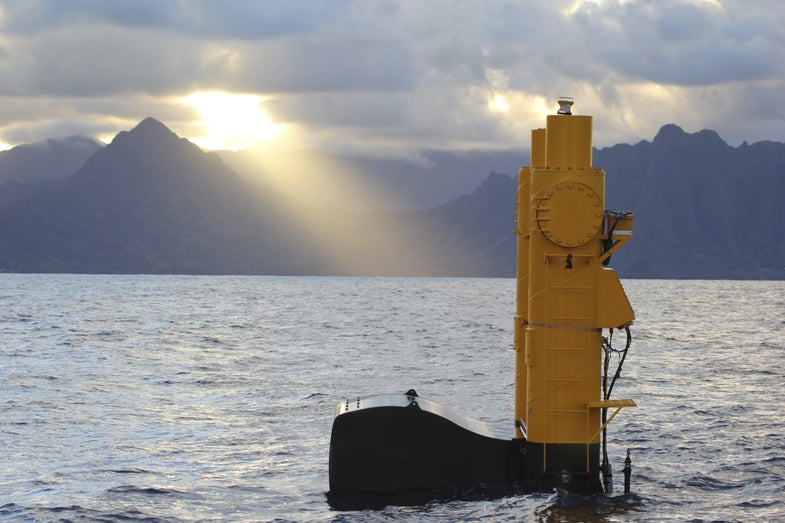 The waves of Hawaii are a big draw for tourists and surfers, but now they’re also a source of electricity. For the first time in the United States, energy collected from waves is being turned into electricity that is heading onto the grid, and powering homes in Hawaii.

The project involves the Azura prototype, built by Northwest Energy Innovations. Azura is a 45 ton machine that moves with the swells of the waves capturing their complex motion in 360 degrees, making it more efficient than other wave generators that only capture a particular movement in the waves (like up and down, or side to side).

Azura was deployed last month, and will run for a full year, monitored by many different research groups, including the University of Hawaii, who independently verified that the generators were working and supplying power to the grid. If all goes well, an even larger version of the device will go into the ocean in 2017.

Though this is the first, there are a lot more wave energy projects in the works. The Department of Energy (DOE) notes that over 50 percent of the population in the United States lives within 50 miles of the coast, making waves (and their energy) an easily accessible renewable energy option.

The DOE is currently sponsoring the Wave Energy Prize, a competition open to the public where teams attempt to build the best wave energy device. Registration for the competition just closed this week, and 92 teams have submitted proposals, hoping to reach the grand prize of $1.5 million. Twenty finalists will be announced in August, and will then start building their designs.