Gribble me this: What eats wood and poops clean energy?

This crustacean could help produce biofuels at lower cost and with less energy. 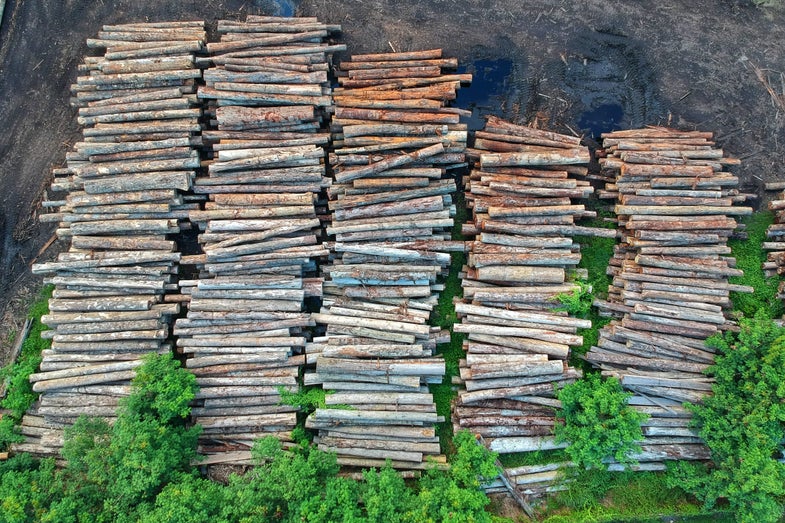 The tiny gribble — less than an inch long — lives in coastal marine environments and feasts upon wood. It gobbles up sticks and logs that wash into the sea from river estuaries, performing an important ecological function. But it also can be a damaging nuisance, eating the wood from boats and piers, causing considerable damage. Unlike other wood-eating creatures, such as termites, that require thousands of microbes for digestion, the gribble’s gut needs no such help. Its digestive system is sterile, meaning it’s free of the complex microbial communities that inhabit other intestines, including ours. Scientists say that understanding how the gribble breaks down wood could help them develop better methods for turning timber into fuel. Currently, wood that is burned to generate energy must first be broken down in costly and energy-intensive processes. Gribbles may hold the key to a cheaper and energy-efficient means of unlocking the energy in wood. “We desperately need to bring all possible mechanisms to bear on reducing carbon emissions,” said Simon McQueen-Mason from the University of York’s department of biology. “The timeframes in which we need to act to avoid the most drastic consequences of climate change are very small, and the clock is ticking.”

For that reason, McQueen-Mason and his research team have been trying to figure out how the gribble breaks through lignin, the tough coating surrounding the sugar polymers that compose wood — long a mystery. They recently discovered that the gribble secretes enzymes called hemocyanins, which are  the same proteins that make invertebrates’ blood blue  and  that enable them to bore through the wood-binding lignin and eat sugars in wood. Their paper appears in the journal Nature Communications.

Hemocyanins transport oxygen in invertebrates just as hemoglobin does in animals. But while hemoglobin binds oxygen through its association with iron atoms, turning blood red, hemocyanins do it with copper atoms, turning their blood blue. “We have found that gribble chew wood into very small pieces before using hemocyanins to disrupt the structure of lignin,” McQueen-Mason said. Humans could use hemocyanins to access the sugar in wood, thereby producing more energy when that wood is burned.

That’s good news for the climate, because wood offers a potentially low-carbon source of power. If a power plant burns trees to generate electricity, and the carbon stored in their trunks and branches escapes into the atmosphere, that, in turn, worsens climate change. But if new trees emerge where old trees once grew, those new trees will scrub that carbon out of the sky. The whole process is conceivably carbon-neutral, though in practice, it’s not quite so simple. It takes a lot of energy to harvest, transport, and burn trees that are often not replaced.

McQueen-Mason noted, however, that woody biomass also includes crop residues such as straws and stover, the leaves and stalks of field crops, such as corn, sorghum, or soybeans that are commonly left in the field after harvesting grain. These materials inevitably decompose, releasing their stores of carbon into the sky, and would better be burned to generate power. These fuels, “derived from woody — cellulosic — feedstock can decrease emissions by around 80 percent compared to fossil fuels, when the whole life cycle is taken into account,” he said. “The problem is that fossil fuels are cheaper.”

The research, which also involved teams from the Universities of Portsmouth, Cambridge and Sao Paulo, found that treating wood with hemocyanins releases more than double the amount of sugar, meaning that burning the wood produces more energy. Hemocyanins perform just as well as expensive and energy-intensive thermochemical pre-treatments that are typically used.

Using hemocyanin could make it easier to produce biofuels, such as wood. “In the long term, this discovery may be useful in reducing the amount of energy required for pre-treating wood to convert it to biofuel,” said Neil Bruce, also from the University of York’s department of biology and a co-author of the study. To use this successfully for industrial use, however, it would be necessary to find ways of manufacturing vast quantities of hemocyanins. This isn’t possible yet, but scientists have it on their agenda.

Lead author of the report, Katrin Besser, also of the University of York’s department of biology, noted that the findings represent another example of how science can use lessons from the natural world. “It is fascinating to see how nature adapts to challenges, and this discovery adds to evidence that hemocyanins are incredibly versatile and multi-functional proteins,” she said.

Beyond the gribble’s value in helping scientists more efficiently produce wood fuel, McQueen-Mason believes the curious little crustacean also could provide biological researchers with a model digestive system worthy of additional study. “There is something unusual going on there that prevents microbes from growing,” he said. “The fact the gribble digestive system lacks microbes is highly unusual and interesting in and of itself.”