These findings could help researchers make prosthetic arms that have a lifelike sense of touch. 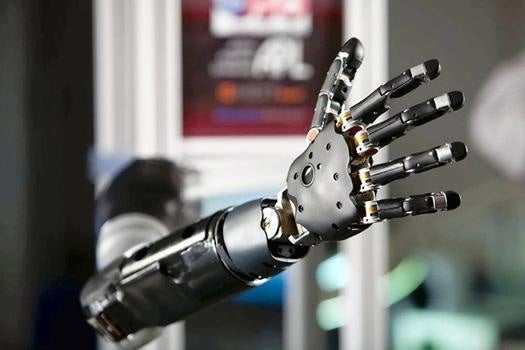 We’ve seen some very cool prosthetic arms recently, including ones people are able to control—just as they control biological arms—with their thoughts. So what’s one of the next great frontiers for prosthetics? Letting people experience touches through them, too.

The human sense of touch does a lot more than let people enjoy fresh sheets or soft kitties. It’s also crucial for helping people judge how hard to hold stuff they want to pick up, or whether they’ve got a good grip on something slippery. In a feature published earlier this year, Nature News talked with one prosthetic arm user, Igor Spetic, who accidentally broke dishes and bruised fruit he tried to hold with his device. If he had a prosthesis that had a sense of touch, he told Nature News, “I’d probably lay everything on the countertop and just start grabbing stuff. I’d be so excited.”

Now one research group is reporting a major step toward a touchy-feely prosthetic. A team of researchers from the University of Chicago and Johns Hopkins University performed a series of experiments that showed they could send electrical signals directly to the brains of rhesus macaques and that the macaques were able to interpret the signals as touches on different parts of their hands. Another series of experiments showed rhesus macaques could interpret different direct-to-brain signals as touches of varying pressure. A third explored whether direct-to-brain signals work quickly enough to be able to accurately tell macaques when a prosthetic is touching something and when it stops the touch. (The signals seem to move too slowly to be totally accurate, but the researchers thought of some workarounds, which they discussed in a paper they published today in the Proceedings of the National Academy Sciences.)

The macaques were quickly able to interpret electrical brain stimulation as analogues to physical touches.

The team will surely work to incorporate those findings into a device. For one thing, some of the researchers’ experiments actually involved a prosthetic finger that sent signals to the research monkeys’ brains. For another, Johns Hopkins University is working on a prototype that’s the most sophisticated touch-enabled prosthesis in the world, with more than 100 sensors, Nature News reports.

There was one especially cool thing the Chicago-Johns Hopkins team demonstrated. While it’s impossible to know exactly what the monkeys feel when they get electrical buzzes to their brains, one series of experiments showed the animals were quickly able to interpret electrical brain stimulation as analogues to physical touches.

This research could help scientists develop touch-enabled prosthetics that send signals that are intuitive for people to interpret, the researchers wrote in their paper.

It’ll be years yet before technology like this will show up in prosthetics for people, however. It is invasive, requiring wiring to the brain, so researchers will have to do a lot to show it’s safe and durable. (Nobody wants to have to undergo frequent brain implants for tune-ups or software updates.) It’s also not clear yet whether electrical signals sent to the brain are able to reproduce touches as specific as human or monkey skin is able to feel. The electric signals could be lower resolution than true touches.