The Rafale fighter jet is a warplane with a ‘French touch’

Indonesia is buying 42 of the multi-role aircraft. Here's everything to know about a plane from France that's been flying in different forms for decades. 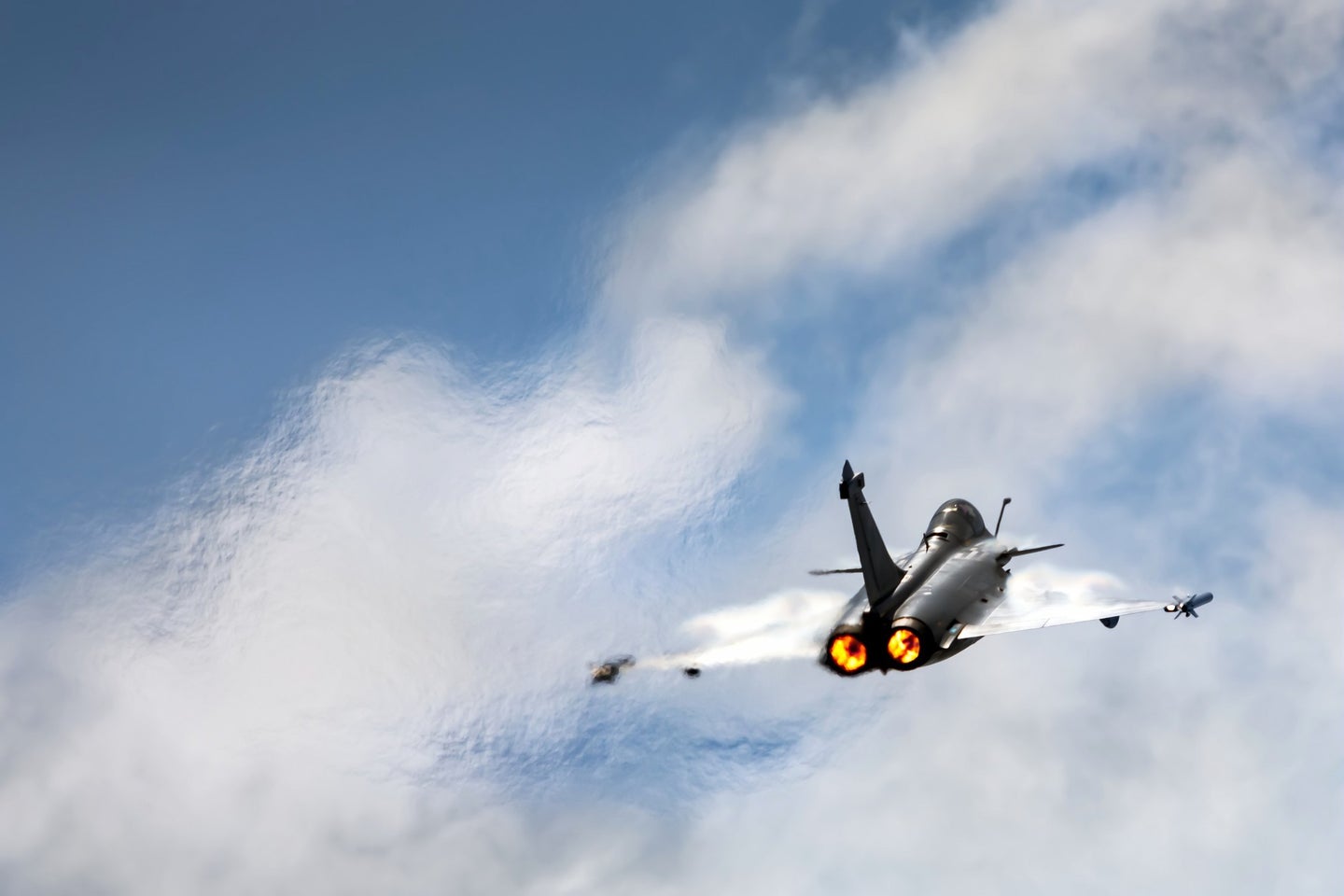 A Rafale at the Paris Air Show in 2019. © Dassault Aviation - M. Douhaire
SHARE

Last month, the Indonesian Air Force became the eighth air force to choose the French-made Rafale warplane. To the tune of $8.1 billion, it is buying 42 of the F3R, which is the fourth version of these jets.

The Rafale is a multi-purpose aircraft: It can carry out air-to-air combat, or can drop bombs on targets in an air-to-ground mission; or, thanks to its cameras, radars, and other sensors, it can be employed for intelligence gathering. It comes in single-seat and dual-seat variants and is pronounced “Ra-faal,” with the accent on the second syllable. The jet, originally designed for the French Air Force and Navy, has also, over the past seven years, made its way to Egypt, India, Qatar, Greece, Croatia, and the United Arab Emirates. France has used it in Afghanistan, Libya, Iraq, Syria and Mali, where it flew its longest mission to date in 2013, flying for nine hours and 35 minutes. Rafale means “gust,” like the wind.

Here’s what to know about this French jet.

The Rafale was designed, and is manufactured by, Dassault Aviation, established in 1929 by Marcel Dassault and still majority-held by his descendants. It comes in three versions: two-seat and one-seat models for the Air Force, and a single-seater for the Navy that has a modified undercarriage and an arresting hook on it for carrier landings.

A former French Air Force pilot with current knowledge of the Rafale who spoke to Popular Science (on condition he not be named) explains a key difference between the Rafale and the Eurofighter Typhoon, which is the combat aircraft jointly developed by Italy, Germany, Spain and the United Kingdom.

“With the Rafale you can take off on an air-to-ground mission and switch whilst airborne to an air-to-air mission, and then re-switch to your original mission without losing any of the original data. On the Typhoon you can also switch, but the huge difference is that once you switch, you lose everything prepared for the initial mission,” he explains.

He adds that the Typhoon can also fly air-to-air and air-to-ground missions, “but if the pilot has to switch whilst airborne from one to the other it is very complicated to switch back—on the Rafale it’s very easy.”

Mathieu Durand, a spokesman for Dassault Aviation, tells Popular Science that “we thought light and multi-role would be easier to sell. [While it was] controversial at the time, it’s paying off now.”

The aircraft’s development took a long time. The demonstrator flew on July 4, 1986. As that went well, the program was officially launched in January 1988, the first prototype took to the air on May 19, 1991, and the first Rafale F1 was delivered to the French Navy exactly a decade later, on May 18, 2001.

Dassault only made 10 Rafale F1s. They were “just for the French Navy’s air-to-air missions because they were in a real hurry to replace their 35-year old Crusaders,” Durand says. The French Air Force got its first F2 multi-role versions in 2006, which were equipped with a limited number of weapons. Two years later the F3 version, with a new radar, was delivered. The F3R version, operational since 2019, carries new weapon systems.

“Externally these versions all look identical,” he explains.

Lean back and relax

All this comes in a fairly small machine that you could park on a tennis court. The Rafale is 50 feet long with a wingspan of about 35 feet, making it about the same size as an F-35. In comparison, the newest F-15, the F-15EX Eagle II, is 10 feet longer and 8 feet wider. From ground to tip of tail, the Rafale is about 17 feet high, just 1.2 feet shorter than the F-15EX. Like the F-15 EX Eagle II, the Rafale has two engines. The former pilot says these give it maneuverability. “You lose thrust when you pull a turn but with the Rafale you regain it really fast,” he says.

Pierre-Henri Chuet, a former French Navy Rafale pilot, finished his training in the United States on a T-45 Goshawk, “which feels a lot like an F-18,” he says, so he has a good idea of how a US fighter pilots might react to the Rafale.

He says they would first be surprised by the small size of the Rafale’s cockpit and the two sticks, one on either side of the pilot instead of a single stick between the pilot’s knees. On the left is the throttle lever, and on the right the flight control stick. There are 14 buttons and switches on each stick and they all have multiple functions. This HOTAS (hands on throttle-and-stick) system—pioneered by Britain’s Royal Air Force in the 1950s—means the pilot can fly the aircraft and perform all vital functions without moving their hands from the controls. “At first you need to think about it all a lot but then it becomes automatic, just like when you’re driving a stick-shift car,” the former pilot remarks.

Chuet adds that “the only problem is we can’t evacuate our stress by moving our hands, so instead we move our feet!” An armrest provides more stability than is possible with a central stick “where you can only rest your hand on your thigh but that’s difficult because you often have a tablet strapped to your thigh.”

When he first sat in the Rafale, he was surprised at how far back the seat is angled. “It’s actually really comfortable and makes you feel as though the aircraft is an extension of your body,” he says. Apart from the comfort aspect, there’s a safety aspect: the angle reduces the vertical distance between the pilot’s heart and head, making it less likely that they pass out when under strong g-forces.

Chuet adds that US pilots “would also be surprised by how very smooth the flight controls are and how reactive they are. The joystick on the F-18 moves about four inches from its center whereas on the Rafale it moves 0.4 inches. It’s the French touch,” he laughs. But he concedes that in order to gain this smoothness the Rafale has sacrificed a bit of “raw power.”

In terms of weapon-carrying capacity, it has four spots under each wing, plus six under its belly. The F3R version carries the Meteor missile for air-to-air combat, the 1,000 lb AASM for air-to-ground combat, and the Talios pod for targeting and tactical reconnaissance, amongst a host of other weapons and sensors.

“The F4 version will have much more connectivity for network-centric warfare and will prefigure what we’ll do with Europe’s FCAS, the Future Combat Air System,” Durand notes. That version arrives in 2024.