What the Heck is Ricin?

Investigators still don’t know why or how this poisonous compound came to be found in a Las Vegas hotel room, but we've got the beta on its deadly effects 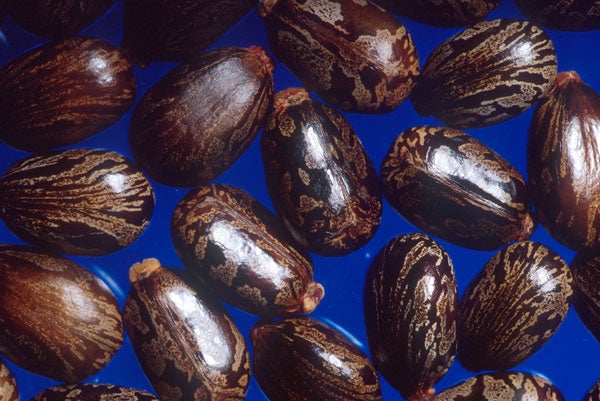 When a pile of castor beans and a couple of vials of white powder turned up on Thursday in a room at the Extended Stay America Hotel near the Las Vegas strip, authorities went into panic mode, calling in police, Homeland Security and FBI agents to investigate.

The white vials contained ricin, a compound derived from the castor plant and sometimes used in cancer research. Doses as tiny as 500 micrograms of the substance have been known to be lethal in humans, due to its effects on cell function. Basically, ricin passes through cell membranes, inhibiting the production of essential proteins and eventually causing the cells to die. Medical researchers at one time hoped that ricin could be specifically targeted to attack cancer cells, but most experts consider it too dangerous a chemical to be used in humans.

A person who inhales even the tiniest bit of ricin (the aforementioned 500 microgram lethal dose translates to an amount roughly the size of the head of a pin) will suffer severe respiratory symptoms followed by pulmonary edema, low blood pressure and possibly death.

Ingesting the chemical produces a different set of dire symptoms, which include vomiting, bloody diarrhea, hallucinations, seizures and… you guessed it… death.

Interesting historical note: ricin was used in the nasty, Soviet-spy-style murder of Bulgarian journalist Georgi Markov in 1978. The attacker struck Markov with an umbrella that had been hacked to inject a pellet of ricin beneath his skin.

So, back to the Las Vegas hotel incident. The man who had been staying in the room where the ricin was found was hospitalized with respiratory symptoms on February 14th, but made no mention (perhaps for obvious reasons) of having been exposed to the poison. It’s still unclear what or who was the intended target of the chemical. Authorities suspect that some sort of sinister action was planned, although there’s no evidence that it was terrorism-related. The man remains in critical condition.

There is no antidote for ricin poisoning and no sure treatment, although to prevent against chemical attacks, the U.S. military has developed a vaccine. The best that medical professionals can do once a non-vaccinated person is exposed is to treat symptoms and work quickly to flush the chemical out of the body. Luckily, there’s probably no chance that you’ll ever in your life be exposed to ricin, but just in case, here are the CDC’s recommendations for protecting yourself against the poison:

– Leave the area where the ricin was released, and move toward fresh air.

– If you think you’ve been exposed, rapidly remove your clothes and wash your entire body with soap and water.

– Using tongs, tool handles or sticks (anything but your hands) place your clothing in a plastic bag and seal it to avoid exposing others to the chemical.

– Seek medical care immediately, and notify authorities about what you’ve done with your clothes.