In a high-tech kitchen laboratory in Seattle, Nathan Myhrvold is putting the finishing touches on Modernist Cuisine, his obsessive 2,438-page cookbook documenting the future of food. I recently visited for a futuristic breakfast 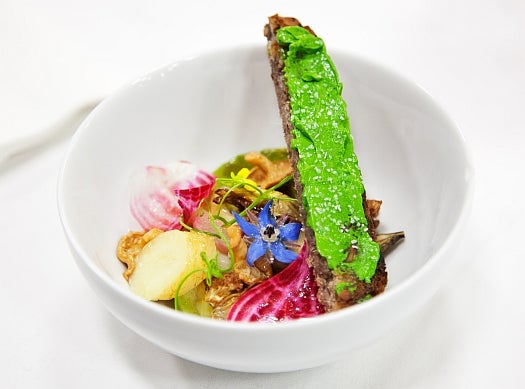 Recently, in a laboratory outside Seattle, I ate a piece of buttered toast that I will remember for the rest of my life. The bread itself was not extraordinary, but it was spread thickly with the brightest-green butter I’ve ever seen. It was not true butter, but rather an extract of pure green peas. Fresh peas are blended to a puree, then spun in a centrifuge at 13 times the force of gravity. The force separates the puree into three discrete layers: on the bottom, a bland puck of starch; on the top, vibrant-colored, seductively sweet pea juice; and separating the two, a thin layer of the pea’s natural fat, pea-green and unctuous. A standard pea yields about three percent fat, so the half-ounce of glistening viridian on my toast was the equivalent of perhaps a pound and a half of peas condensed into a single bite.

I was eating with Dr. Nathan Myhrvold, in the rather amazing kitchen at the heart of his 20,000-square-foot laboratory outside Seattle.

Around us stood shelves of hydrocolloids and emulsifiers, freeze-drying and spray-drying apparatus, a battery of immersion circulators, homogenizers, vacuum chambers, and even less readily identifiable laboratory equipment that Myhrvold and his team have shanghaied for culinary purposes. “I never want to work again in a kitchen without a centrifuge,” Maxime Bilet, the kitchen’s head chef of R&D, tells me.

Click to launch the photo gallery for a tour of Myhrvold’s wondrous kitchen laboratory, and a closer look at my meal

This kitchen is the home base of Modernist Cuisine, a rather ambitious cookbook project that Myhrvold first outlined in 2006. He holds PhDs in mathematical economics and theoretical physics, studied with Stephen Hawking, and worked for years as CTO of Microsoft (which left him with a healthy amount of spare change). But cooking, and particularly the research end of cooking, has always been a strong interest. He studied at the esteemed cooking school La Varenne, apprenticed at top Seattle restaurant Rover’s one day a week while he was still at Microsoft; and won first-place titles at the World Championship of Barbecue in 1991.

As he became interested in sous-vide cooking — the modern method of cooking vacuum-sealed foods at low temperatures for hours or days on end — he saw the need for a book codifying the increasingly popular technique. But, with perhaps fewer constraints on him than many of us have, he saw the book blossom into what it has now become: six volumes covering a much broader domain of technologically enhanced cookery, totalling 2,438 13-by-10-inch pages, self-published and sold in an acrylic case for $625. Last year, when it was projected at a mere 1.5 kilopages, it had already garnered blurbs from top names in food like “The most important book in the culinary arts since Escoffier” (Tim Zagat) and “The cookbook to end all cookbooks” (David Chang).

“We’re the only combination cookbook studio, research kitchen, and general laboratory that I’m aware of,” says Myhrvold as we unfold our napkins. In addition to the kitchen where we sit, the building, which belongs to Myhrvold’s company Intellectual Ventures, houses a working biology lab and mosquito hatchery, a chemistry lab, a serious machine shop, a “small things lab,” and a photography studio (where the beautiful book was produced), as well as a number of areas demarcated by blue masking tape on the floor, about which I am sworn to secrecy. 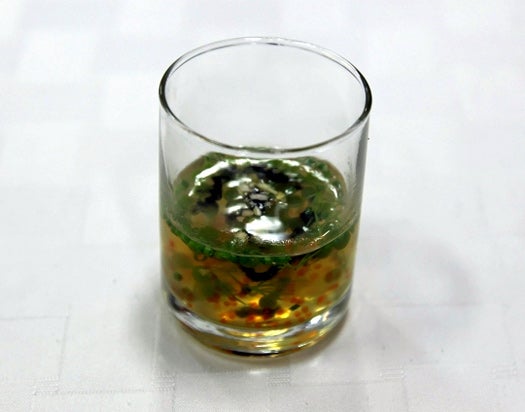 A Bagel In a Glass

Broth made from an everything bagel, with tidbits of dill, lox, chives, and all the rest of a complete breakfast.

Intellectual Ventures, Myhrvold’s “day job,” is in the business of patents, buying them from inventors as well as developing its own, which is what the lab’s for. One of the main areas of innovation is fighting mosquito-borne disease; the last time PopSci covered the company, it was for the laser weapon designed to blast mosquitoes out of the sky. A humid insectary room just off the kitchen contains dozens of breeding compartments, each home to a different strain of mosquito. (There’s very little cross-contamination, I’m repeatedly assured.)

Myhrvold has always taken an analytical approach to food. As a barbecue pitmaster, he encountered the common phenomenon known as “barbecue stall”: when cooking a piece of meat, the internal temperature doesn’t rise consistently, as one might expect; instead, it rises for a while, then holds steady for a few hours before continuing to rise. As Myhrvold explains, theories about what causes the stall have varied widely — was all that heat energy being used by the endothermic reaction turning the beef’s collagen into gelatin, for instance?

He designed a simple experiment to answer the burning question. He cut a brisket in half, sealing one portion in an airtight pouch, and leaving the other naked. Both were cooked in a precise convection oven. The naked brisket stalled as usual, remaining around 172 degrees F for two and a half hours; but the sealed brisket’s temperature rose evenly, with no stall. Factors like collagen conversion and fat melting were the same in both portions, so those reactions couldn’t have been what was stalling the meat. His hypothesis — that the stall is caused by surface evaporation of water — was established. “And this is kind of the definitive experiment!” Myhrvold exclaims.

“In this lab, we did invent some new dishes and found some new things out, but primarily we’re documenting the revolution that’s already occurred: the modernist revolution that started in the late ’80s, with Ferran Adria and a variety of others.”

As we talk — and consume course after course that the laboratory staff assembles for us — Myhrvold enthusiastically shows me slides of hundreds of pages from the enormous cookbook. It begins modestly with a complete history of cooking since Paleolithic times and a grounding in the necessary basics of microbiology and physics — Myhrvold wrote thousands of lines of code in Mathematica to model heat transfer in different substances — before getting into the new stuff. There’s a volume dedicated just to Ingredients, with detailed coverage of meat and vegetables as well as chapters on gels, emulsions, and foams. The section called “The Modernist Kitchen” covers topics like Extracting Flavors and Cryogenic Freezing; sous vide has its own chapter. When the book presents recipes, they’re often in stripped-down parametric form, presenting the essentials of temperature and time in chart form to allow experienced cooks to quickly look up how to apply a particular technique.

It’s a lovely-looking book, too. The paper and the printing process have received no less scrutiny than the cooking. In addition to his other accomplishments, Myhrvold is an award-winning photographer — the ravening lion that illustrates the Meat chapter was photographed by him in Botswana. One of the first people hired to work on the project, back in 2007, was photographer Ryan Matthew Smith, whose vivid shots give the book its distinctive look. A recurring motif is the cutaway, a cross-section view of what exactly is happening in a piece of meat, hot wok, or microwave during cooking. Although it looks like photographic trickery, in most cases this effect was won the hard way: cutting a piece of equipment in half in the laboratory’s machine shop (they even bisected a $5,000 oven), then photographing it in action, as hot oil or whatnot spattered out the missing side — most often, it seems, onto the game Max Bilet. 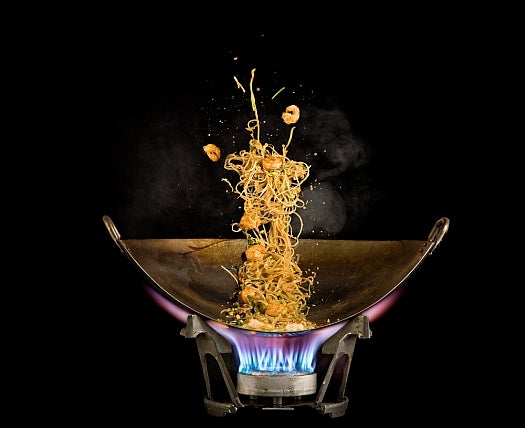 After a round of foie-gras bonbons, two different preparations of sous-vide beef, and a plate of homemade processed cheese — same idea as Velveeta, but rather better — the meal comes to an end with a scoop of lush pistachio gelato. Unlike gelati I’ve known and loved, which are creamy because they’re made with abundant amounts of cream and egg yolks, this one is dairy-free. The creamy texture is the product of pushing pistachios through an ultra-high-pressure homogenizer, so their oil emulsifies into a fine-textured, opaque cream — much as milk does — that provides the body for the dessert.

Modernist Cuisine is not a cookbook for everybody; it demands not only a deep wallet but also a capacious kitchen to accommodate at least a modicum of the fun equipment the book covers. (Tune in soon for my home-centrifuging experiments.) And to accommodate the book itself, which comes in just under 50 pounds. But an influential portion of the culinary world has been breathlessly anticipating the publication, now on target for March, and it seems certain that the book’s effect will resonate beyond those of us who intend to read it cover to cover and fiercely bid on eBay for ultrasonic baths. Myhrvold is confident that his book will leave a mark.

“I’m hoping, for the rest of my damn life, I go to restaurants, look at the menu, and I say, ‘aha, I know where that came from!'”

Also see our close look at what’s inside the kitchen lab. 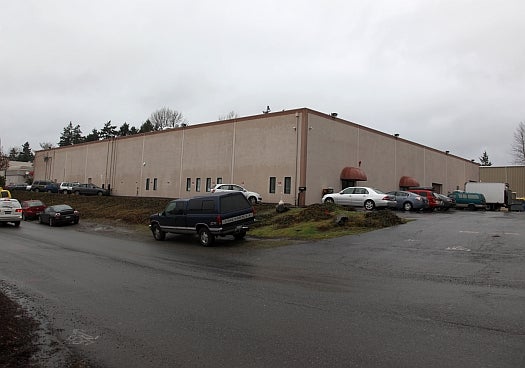 An Unmarked Building, Somewhere Outside Seattle

The home of the Modernist Cuisine kitchen laboratory. 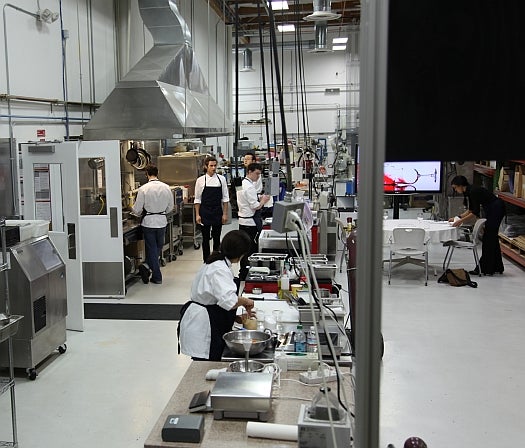 Getting Ready for Lunch

The staff prepares to serve a modernist meal. 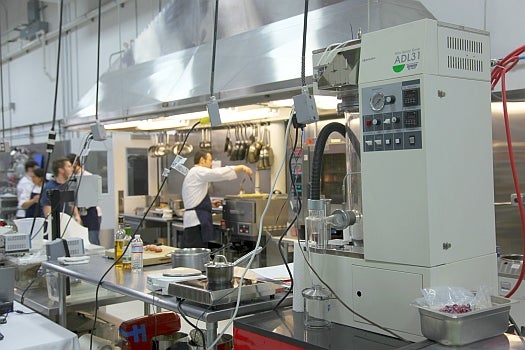 Seen here, the Yamato mini-spray dryer is used by the kitchen staff to quickly dehydrate all sorts of foods, to make such delights as full-flavored caramelized scallop powder. Fancy a sprinkle of spray-dried tomato on that? 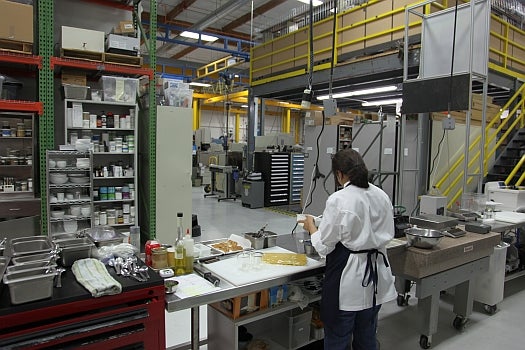 The Modernist Cuisine kitchen’s pea butter is stunning! Even without the edible flowers. 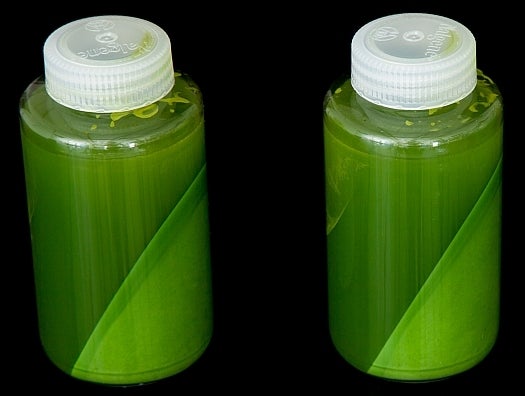 Juice on top; then a thin layer of pea butter; and below that starch. 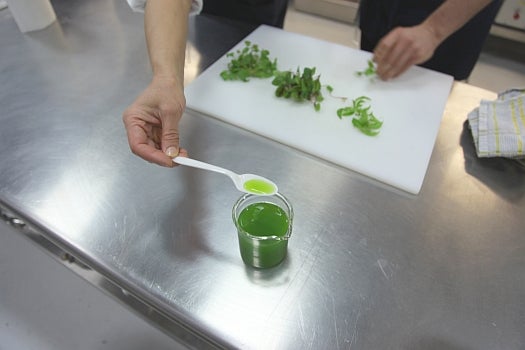 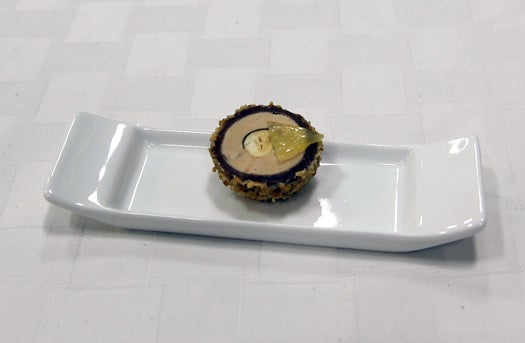 Like Ferrero Rocher candies, but with scrumptious liver inside.

A Bagel In a Glass

Broth made from an everything bagel, with tidbits of dill, lox, chives, and all the rest of a complete breakfast. 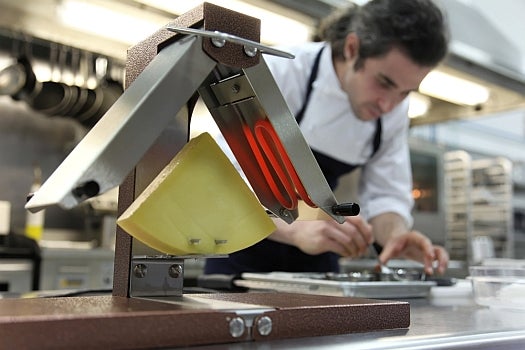 Skewered on the raclette grill, a piece of custom-made emulsified cheese that was concocted in the lab from Comte, gruyere, and gouda. The grill roasts the edges of the wedge to perfection, and the emulsification ensures that the cheese doesn’t separate into a greasy, curdled mess. 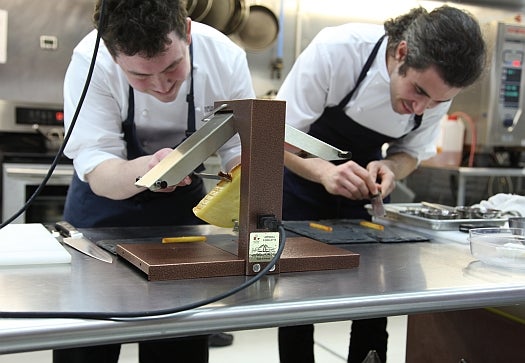 After the raclette grill has done its job, Sam Fahey-Burke and Max Bilet assemble the cheese course. 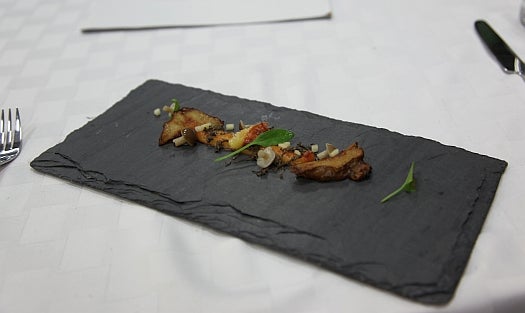 The emulsified cheese is adorned with sunchokes that have been through the ultrasonic bath to maximize their fryability. 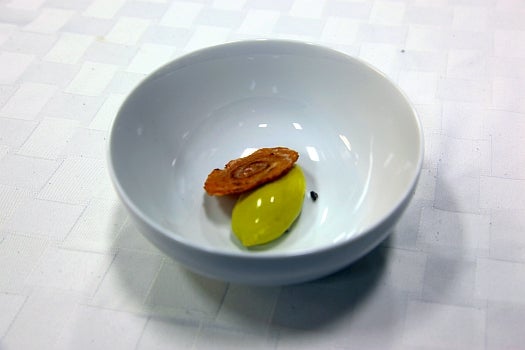 There’s no milk or cream in here. Just pistachios homogenized till they’re creamy, then frozen into unctuous gelato, and served with a cookie. Want to see more? Check out our look at the workings of the kitchen lab here.
books
food