Meet A Real Man Of Steel

James Hobson builds exoskeletons that give him superhuman strength 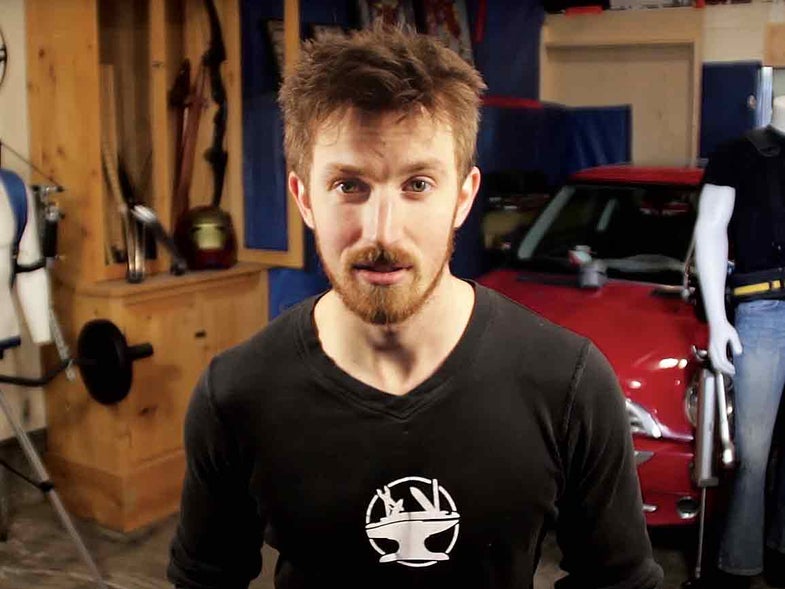 Until recently, James Hobson spent his days designing products for a digital-projector company. But at night, he pursued a very particular dream: to build exoskeletons that give him superhuman strength.

Hobson, a 26-year-old Canadian engineer, got the idea to build an exoskeleton after watching the movie Elysium. “It was the first time I saw an exoskeleton that was depicted in a way that was somewhat realistic,” he says. He thought he could make a simpler version that actually worked in real life.

Hobson started by attaching some leftover pneumatic cylinders to a brace made of perforated tubing. The resulting upper-body exoskeleton allowed him to curl 275 pounds with relative ease. “But my back was still taking most of the load,” he says, “so we wanted to start from the ground up.” That meant building legs to match.

Hobson designed the pneumatic legs with a stronger steel frame, and in January, he used them to lift the back end of a Mini Cooper—approximately 800 pounds. In February, he lifted an estimated 1,500, raising a pickup truck by its hitch.

Hobson quit his job this past November to focus full time on side projects like his exoskeleton work. Now he and his friends are designing a new upper-body exoskeleton to attach to the super-strong legs. Eventually, they hope their designs will be used to help people who are disabled. Strong and lightweight exoskeletons could also do the heavy lifting for firefighters, search-and-rescue operators, and industrial workers.

These Legs Were Made For Lifting

Hobson built his exoskeleton’s legs from lengths of steel, anchored in steel-sole boots, and pneumatic cylinders that stretch from the foot mounts to a hip mount. External loads can be hitched to this steel mount, which connects to a work belt worn at the waist, and holds an air compressor and battery pack. Air flows from the compressor to the pneumatic cylinders via supply lines, elongating the leg pieces and lifting the weight. Eventually, Hobson plans to attach the upper body to the legs, and lift things with the arms as well. Learn more on his YouTube channel, the Hacksmith.

This article was originally published in the May/June 2016 issue of Popular Science, under the title “Real Man of Steel.”