A Mushroom Cloud Made From Coffee Creamer

Don't try this at home 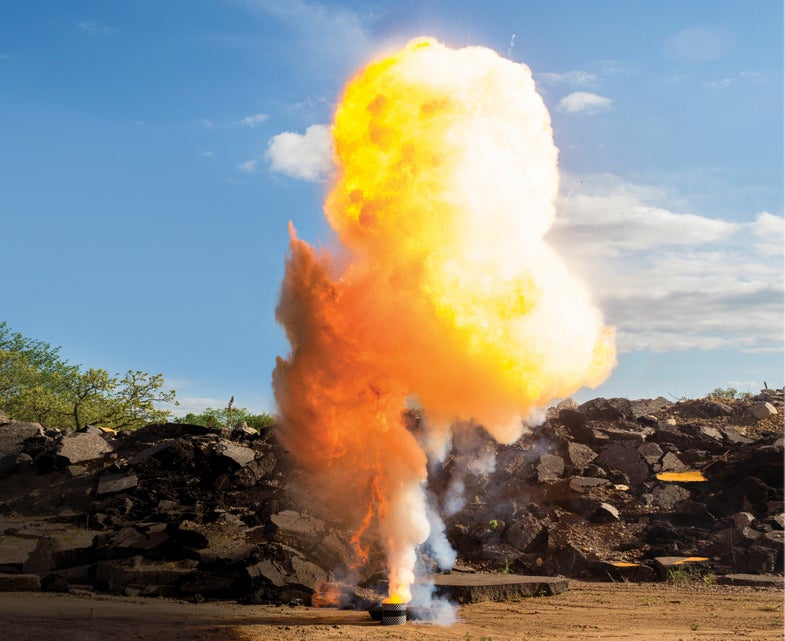 In the early-morning hours of July 16, 1945, a team of scientists at the Trinity site in New Mexico fretted over a large sphere of steel and electrical cables they called the “Gadget.” A few hours later, the device exploded in the first test of an atomic bomb. It created a flash of light, a roar, and a rising cloud of gas, dust, and debris that has since become the universal symbol of unfathomable power.

I decided to make my own.

Not having access to uranium, I used the next best thing: nondairy coffee creamer. Yes, it’s possible to make a mushroom cloud with the stuff that whitens your coffee. These creamers are mostly flammable fat, and their light, powdery form provides plenty of access to oxygen, creating an explosive fuel.

My mushroom cloud started with a 46-ounce steel juice can. First, I deposited a thin layer of black powder, made up of two fuels—charcoal and sulfur—and an oxygen-supplying chemical called potassium nitrate. This layer has two jobs: ignite the coffee creamer and lift the burning fuel up into the air. Then I added tissue paper, to isolate the black powder until it’s fully lit, and a layer of coffee creamer. Finally I inserted a 6-second length of visco fuse into a hole punched in the bottom of the can.

After donning safety glasses, I lit the fuse and then sheltered behind a tree 30 feet away. The fuse set off the black powder, which burned rapidly, ignited the coffee creamer, and propelled it into the air in a giant fireball. As the burning creamer ascended, it left a vacuum in its wake that more air rushed to fill. The result was a column of burning gas that was hotter at its center. Because the hot core rose faster than the cool perimeter, the edges appeared to droop, creating the traditional mushroom shape. The roiling cloud, with its bright orange heart, made a beautiful sight on an otherwise peaceful day.

Don’t attempt this project at home. Gurstelle is a ballistics expert—he knows how to ignite a mushroom cloud without blowing off his hands.

This article originally appeared in the August 2015 issue of Popular Science, under the title “Do Not Make This Mushroom Cloud.”