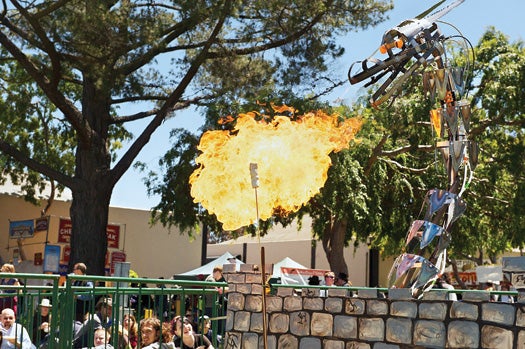 Powered by pneumatic solenoid valves and an Arduino microcontroller, a fire-breathing dragon will be appearing in Marin County, California, on October 31. The project began last year, when the now 17-year-old Sam DeRose and his 16-year-old friend Alex Jacobson teamed up with their fathers, Tony and David, to design a robotic version of the friendly dragon Saphira from the Eragon fantasy novel and movie.

Their eight-and-a-half-foot tall Saphira can rise from her turret, extend her wings, turn and nod her head, and shoot huge balls of flame. The team cut the steel body parts with an oxy-acetylene torch and added solenoid valves to move Saphira’s joints. Next they wrote scripts that link a joystick through a laptop to the Arduino, which sends movement commands through a motor controller to the valves. To ignite the propane that produces the fireballs, they modified an existing design that uses a switch. But Saphira’s eyes, made of ping-pong balls and a lightbulb, would have melted if a continuously lit pilot light had been mounted in her head, so they jerry-rigged the switch to simultaneously release propane and briefly fire an auto spark plug. 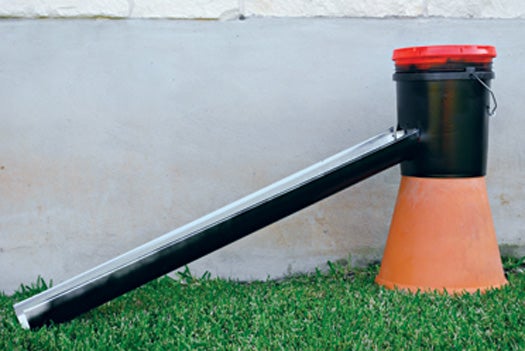 Trick-or-treaters at Noel Portugal’s Austin, Texas, home are invited to press a button on a control box or to text or call the number on the box’s LCD screen. The device wirelessly broadcasts incoming candy requests to an Arduino on the second story of the house. When the Arduino receives a request, it activates a servo motor, opening a gate that covers a hole in the side of a bucket and releasing candy to the children below. 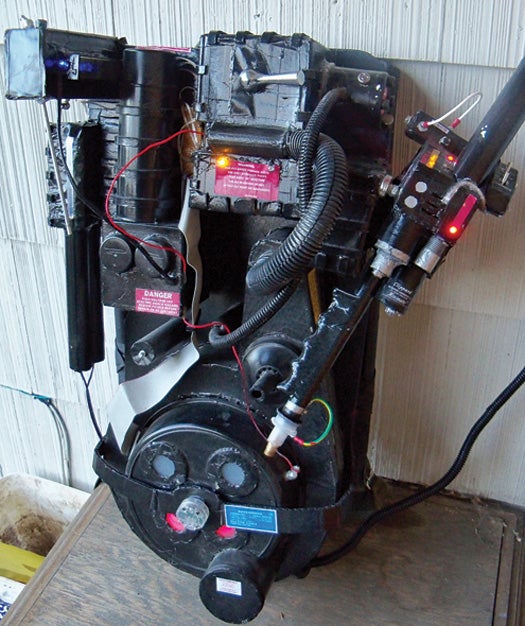 Oregon salesman Ian Fagan built the pack for his Ghostbusters costume from blueprints he found online and added an Arduino lightcontrol system and laser pointers. He cut a plywood base, mounted it on a backpack frame, and made components from boxes, Styrofoam and other parts. He also salvaged switches from broken electronic equipment to power on the lasers for the firing wand.