Phineas Gage, Neurology’s Most Interesting Case, Gets His Head Re-Examined With a New Neural Map

Scientists are getting another chance to get inside Phineas Gage’s head. The 25-year-old Gage was a railroad supervisor back in... 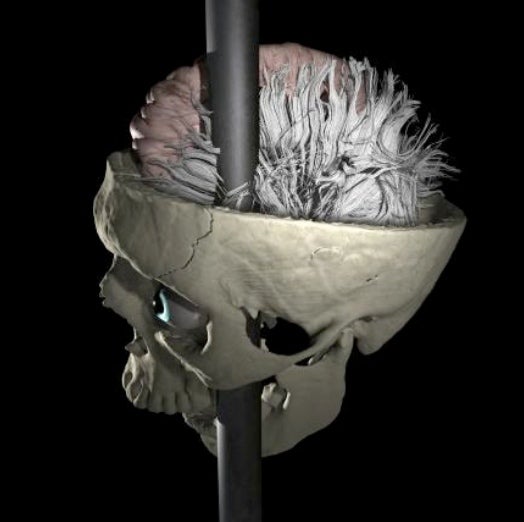 Scientists are getting another chance to get inside Phineas Gage’s head. The 25-year-old Gage was a railroad supervisor back in 1848, using a 13-pound, 3-foot-7 iron rod to pack blasting powder into a rock just moments before becoming history’s most interesting neuroscience case. Gage somehow triggered an explosion that drove the rod straight through his left cheek and out the top of his head, taking a chunk of his left frontal lobe with it.

Yet somehow Gage survived, though not really as Phineas Gage. The previously likeable young man underwent severe personality changes, becoming irritable and profane, far from the person he once was. Scientists studied his case for the dozen years he survived after the accident, and have been fascinated with Gage’s brain ever since–up to an amazing reconstruction just completed.

Studying Gage’s brain today has proven difficult, and scientists have long argued over just how much of his brain matter was removed or damaged in the incident–key data that could help explain both his profound changes in behavior and the causes and effects of certain deleterious frontal lobe disorders like Alzheimer’s. When Gage died there was no recorded autopsy, and while his skull was preserved it is now deteriorating. As such, the last time it was allowed to be imaged was in 2001, and those computed tomography scans were quickly lost somewhere at Brigham and Women’s Hospital in Boston, an affiliate of Harvard. The last, best data on Gage went missing.

But the authors of a paper publishing in yesterday’s issue of the journal PLoS ONE were able to finally recover the CT data files that had been lost for more than a decade, and using them they have reconstructed Gage’s brain using modern-day brain images of males matching Gage’s age and handedness (he was a righty). These new models are the best look yet at what most likely happened to Gage’s brain.

The real question here isn’t how he survived, but one of the architecture of the brain and how it’s wired together. The researchers, from UCLA, found that their models show that nearly 11 percent of Gage’s white matter was damaged, as well as 4 percent of the cortex. That basically means that while the cortical damage was restricted to Gage’s left frontal lobe, the disruption to his brain’s connectivity via the white matter damage reverberated throughout the brain, severing connections between the left frontal, left temporal, and right frontal cortices as well as the left limbic structures of his brain even though the rod completely missed those areas.

This explains why this iron tamping rod–which gruesome as it may sound only physically impacted a small portion of his brain–had such widespread impact on behaviors governed by other brain regions. Gage’s injury is not unlike many traumatic brain injuries, or even certain degenerative diseases. So understanding what went on in Gage’s head should inform the way neurologists thing about the human brain even a century-and-a-half later.