A Ribbit-ing Concept In Wound Healing

An antimicrobial peptide from Eurasian frogs can speed up tissue regeneration 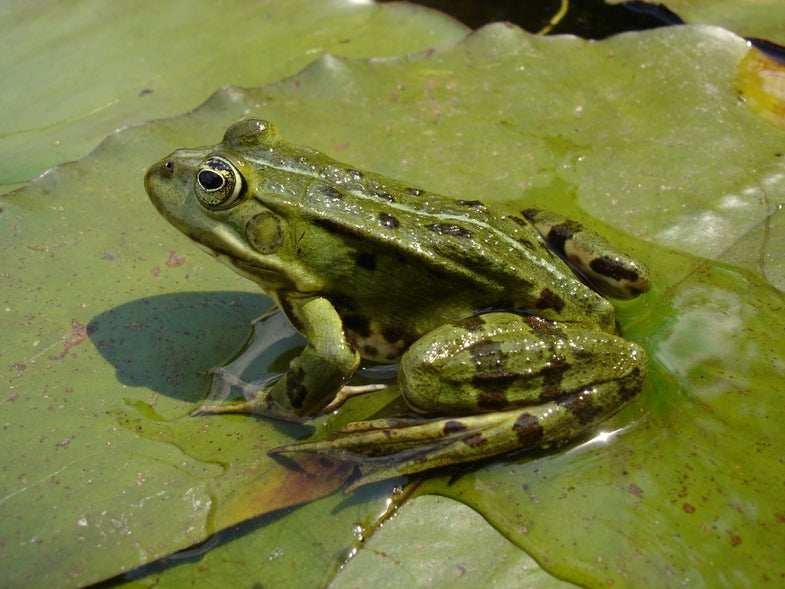 Cuts, scrapes, and gashes can take several days to weeks to heal. To speed up the process, history has provided a list of options. Some are fairly appreciable, such as aloe vera and honey. Others are somewhat more extreme such as the rather aesthetically unpleasing technique maggot-induced wound healing.

But one that has stood the test of time – and for some urban legend – is the use of frog skin secretions to improve regeneration. The trick is simple. After a wound has occurred, find a frog, rub it on the wound, and prepare to be healed. The idea hails from the apparent ability of amphibians to regenerate without scarring. Although this exact procedure has not yet been certified as being credible, there have been many studies in the laboratory to provide support for developing a medically-appropriate alternative.

One of the first revelations about the power of frog skin came in 1987. At the time, researchers discovered a number of proteins known as antimicrobial peptides (AMPs). They came from the African clawed frog and had the ability to inhibit a variety of wound pathogens including bacteria, fungi and even amebae. The discovery suggested frog skin secretions could improve human laceration repair. This however was not tested in a clinical environment.

Since this discovery, a number of other AMPs have been found in a variety of frog species suggesting these molecules may be more widespread than usual. Their abundance also offered the opportunity to initiate screening for wound-healing AMPs for future harnessing and possible production.

But while AMPs have been associated with frogs, their involvement in the actual healing process has until recently remained a mystery. Most of the healing properties of frogs seem to be due to the lipids on their skin and in the secretions. Analysis of AMPs at the nuclear level only offered hints as to their involvement. Yet no exact mechanism could be identified. In essence, their contribution was limited to preventing microbes from gaining the upper hand in a vulnerable cellular environment.

But that changed last year with the discovery of a separate function for these AMPs. A laboratory examination revealed two specific types, Temporin A and B, appeared to help the cellular healing process. The specific mechanism involved the attraction of keratinocytes, which are needed to ensure proper skin healing. The study suggested the key to this stimulation was an interaction with the cellular epidermal growth factor receptor (EGFR). Yet the actual process by which a frog-protein called out for human cells was not answered.

Now, an answer may be at hand. Last week, the same team of researchers revealed even more about this cross-species symbiosis may occur. Their work suggests AMPs interact with more than just microbes. They apparently can guide and drive human cell behaviour as well.

The experiments involved a different AMP than temporin. The test molecule was from a family known as the esculentins. The reason for the switch was due to the formation of an in-house variety called esculentin-1a(1-21)NH2. This synthetic version of the original was already known to be highly effective at killing several bacterial pathogens as well as the formation of biofilms. It could also be easily traced to figure out what might be happening at the molecular level.

With AMPs in hand, the team introduced the molecule to skin-like cell cultures. They tested at first the toxicity of the modified esculentin – it wasn’t – and then whether it would lead to migration like the temporins – it did. With these fundamental steps completed, they could begin to identify wound-healing activities.

The means to accomplish this goal involved scratching the skin-like cells such to create a pseudo-laceration. Once the cut was made, the researchers examined the time necessary to re-close the wound. Normally, after 12 hours, the wound would be about 85% healed. But when the AMP was added, that jumped to 100% with nanomolecular amounts. This was to some extent expected but showed the value of esculentin.

As to how the AMP accomplished this task, the results were fascinating. The molecule appeared to enter the cells and stimulate a variety of genetic changes while never actually entering the nucleus. Though the actual events on the inside were not elucidated, the mere fact this protein somehow found its way into the cells suggested even more might be happening than previously thought. There was definitely more room for exploration in the future to determine the intracellular targets and their contribution to overall healing.

The results of this particular study may offer more questions than answers in terms of the actual mechanism of healing promotion. Yet the results do suggest AMPs may have more benefit than simply keeping out pathogens. With future research, the entire spectrum of benefit should be understood and eventually lead to the realization of an urban legend.