Birth of a Titan

The A380 is the most massive jetliner ever built, and getting it done was an equally huge undertaking. Here, an exclusive look at the unveiling of Airbus's giant gamble

There were acrobats from the Cirque du Soleil, a mechanical objet d’art that looked like a mad inventor’s spaceship, and a voluble computer-generated wizard that bore a disturbing resemblance to a bathrobe-clad George Carlin-the ceremony in Toulouse, France, that marked the completion of Airbus’s first A380 was nothing if not pomp-filled. But when four kids finally tugged on a huge tasseled cord and the curtain fell to reveal the largest jetliner ever built, the spectacle was just beginning.

The A380´s wings span 262 feet, 50 feet more than a 747, the biggest commercial jet flying today. Fully loaded, the plane will weigh 1.25 million pounds, carrying one third more passengers than a 747 in 1.5 times the floor space but making only half as much noise. And the A380 burns 12 percent less fuel per seat than a 747-80 passenger miles per gallon, about as much gas per passenger, per mile, as a Ford Taurus with three people on board.

The airline CEOs who turned out to welcome the A380 have signed contracts to buy a total of 149 of the giants, worth $40 billion. The plane seats 535 passengers in the usual intercontinental three-class mix, while giving passengers more room to stretch. Virgin Atlantic chair Richard Branson, whose airline has ordered half a dozen, joked at the ceremony that with a casino and first-class double beds, “there’ll be two ways to get lucky on a Virgin A380.”

A380 No. 001 is the product of a colossal decade-long industrial and technological effort that has spanned the world and will probably cost more than $15 billion before Singapore Airlines, the first customer in the delivery queue, receives an airplane. The new final-assembly buildings at Toulouse are designed to produce about one A380 a week by 2008.

Airbus is clearly banking on the A380´s high-domed forehead and knitted-brow expression becoming ubiquitous at megahub airports. Boeing, which has dismissively predicted that Airbus will sell only 400 of its new heavyweights, has a different vision: Its new 223-passenger 787 is designed to bypass huge hubs, instead linking midsize cities. The first A380s will enter service in mid-2006; the plane should first reach JFK, in Air France colors, in the summer of 2007. 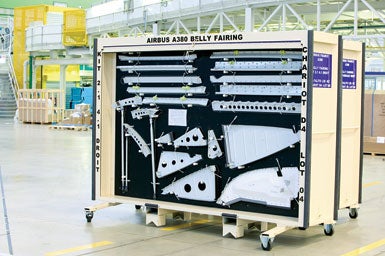 Airbus chief commercial officer John Leahy demonstrates a fold-out bar in the upper deck of Airbus´s mock-up of the A380 cabin. The bar is built into what Tim Clark of Emirates Airlines calls â€revenue-deadâ€ space-areas such as doors and cross-aisles that can´t be filled with seats. Most early A380 operators plan to carry 500 seats or fewer, allowing plenty of room for bars, casinos and duty-free stores, but the airlines are keeping details of their new interior amenities to themselves, so as not to tip off competitors. Cynics predict that the common spaces will get swallowed up by more seats once the plane is in service (it can hold more than 800 seats), although airline bosses deny that will happen. 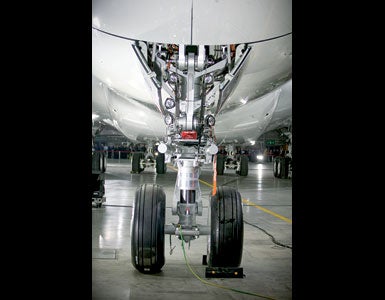 The A380´s landing-gear parts are machined out of solid high-strength metal alloys; the multiwheel â€trucksâ€ in the main gear originate in Russia as forged blocks of titanium. 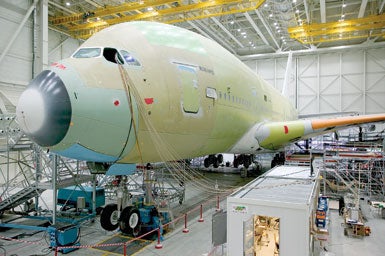 Balanced on jacks and wired to a battery of test instruments, the second A380 undergoes vibration tests to clear the way for its sister craft´s maiden flight. 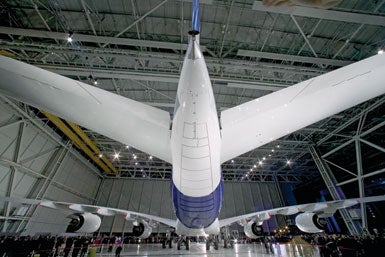 Whale of a Tail

The A380´s wing curvature raises the engines clear of the ground while placing the body close to the runway, allowing for shorter and lighter land- ing gear. The area of the horizontal stabilizer is equal to the wing area of the 220-seat A310. 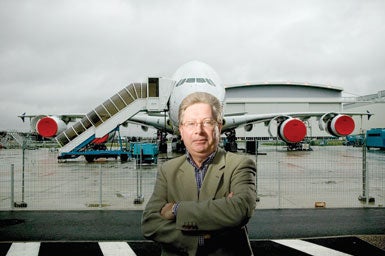 Philippe Jarry skipped class at the University of Paris to watch the first Boeing 747 land at the 1969 Paris air show. A quarter of a century later, as the marketing director for what was then called the A3XX, his job was to persuade airlines to take a pass on Boeing´s offer of a stretched 747 and wait for Airbus´s new bird. â€All we had was a pile of brochures,â€ he says today, standing before the completed plane. 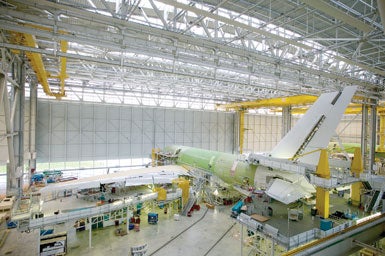 An intricate system of docks, platforms and elevators puts workers, tools and parts within easy reach of the under-construction A380. 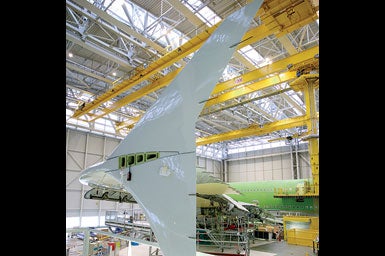 An airplane flies because the air under the wing is at a higher pressure than the air above it. Inevitably, the air tends to flow upward around the tip, reducing lift and increasing drag. Eight-foot-high winglike â€fencesâ€ mounted vertically on the A380´s wing tips block this flow and make the wings more efficient. 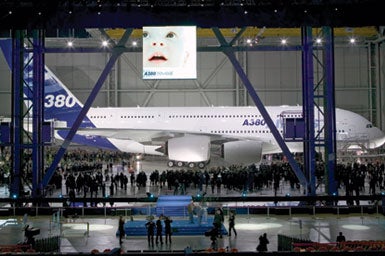 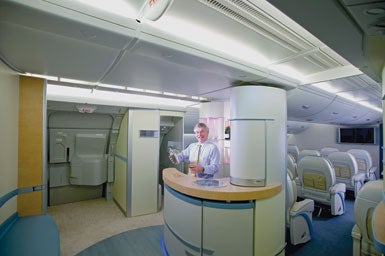 The parts needed for each stage of A380 construction are transported to the assembly line in Toulouse in special containers like this one. The foolproof organization of the box is designed to help with the overall efficiency of the building process.
787
A380
airbus
Bill Sweetman
popular science