Aero Ace Piecing It Together 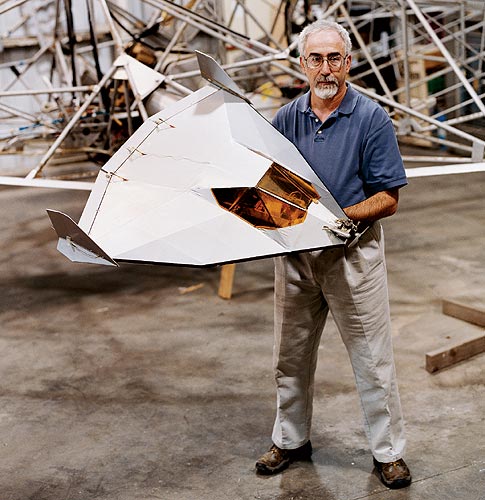 Barnaby Wainfan’s full-size Facetmobile sits in pieces behind him. This radio-controlled version of the two-seat Facetmobile, the FMX-5, sustains him while he slowly rebuilds the crashed prototype.

Barnaby Wainfan has seen the future of general aviation, and it looks like a stealth fighter. His design for an inexpensive home-built two-seat general aviation airplane, the Facetmobile, is a delta-shaped blended-wing aircraft composed entirely of sharply angled flat planes–just like the Lockheed-Martin F-117, which was unveiled to the public six months after Wainfan began building his design.

That’s a coincidence, says Wainfan, an aerodynamicist at Northrop Grumman. The F-117 is built with flat facets to reduce its radar signature; the Facetmobile, to cut costs. The parts are flat so that a home builder could make them on a table. “Airplanes are too expensive,” Wainfan says. “A new airplane should cost the same as a car, not a house. People tend to think about performance, performance, performance–higher, faster, farther. For me, it’s about simpler, safer, less expensive, more fun. The Facetmobile is for people who fly because it’s good for their soul.”

Wainfan’s primary influence was the Dyke Delta, a homebuilt delta-wing aircraft that was introduced in 1962. Futuristic-looking for its day, with a vertical tail but no horizontal stabilizer, the Delta could cruise at 170 mph and climb at 2,000 feet a minute. Wainfan’s Facetmobile achieved 110 mph with just a 46hp engine; a larger version with a bigger engine could easily match the Delta’s performance. The airplane’s flat-panel construction makes for rougher aerodynamics than the Delta’s (or those of virtually any other airplane out there, for that matter), but Wainfan says the penalty in drag is minor–and worth it, given the ease of construction.

Wainfan, 49, a small, intense man with an unruly mop of gray hair and a bushy goatee, first flew the Facetmobile in 1993. That year, he flew it from his home airport in Chino, California, to Oshkosh, Wisconsin, and back, a distance of about 2,350 miles. The following year he was taking off from Blythe, California, when the engine quit at 500 feet. Wainfan walked away from the crash unscathed, but the plane was a wreck.

Forecast: Calm
Today the Facetmobile, or what remains of it, resides under a dusty black tarp in a hangar in Compton, California. After it gets new landing gear and a new covering of fabric, it will be ready to fly again–if Wainfan ever gets around to it. “I’m trying to support a family of five with a job in the aerospace industry,” he says. “There are compromises you have to make. Like John Lennon said, â€Life is what happens while you’re busy making other plans.'” No one doubts that the Facetmobile can fly, or that it could be built inexpensively. “It’s a safe, viable concept,” says Jack Cox of Sportsman Pilot magazine. The real question is whether Wainfan will ever find the time or money necessary to turn it into a viable business proposition. “If you have the resources to help,” his Web site appeals, “please contact us.”