The rules of microscope optics were made to be broken 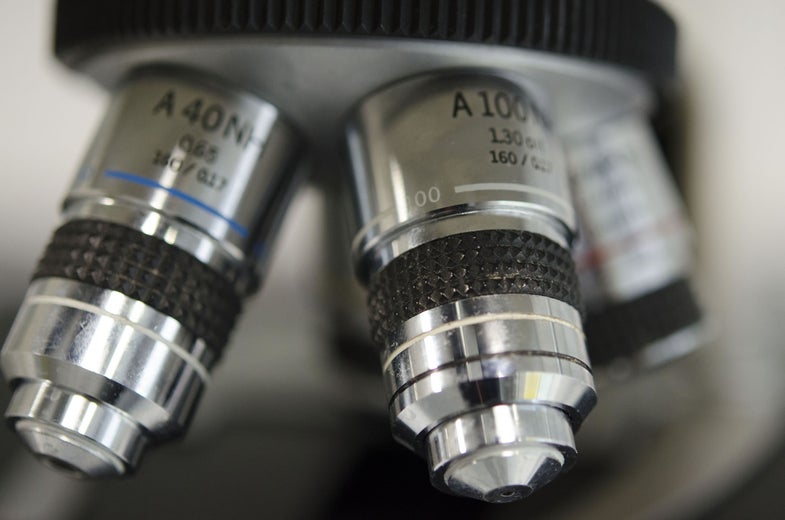 In 1873, a German physicist named Ernst Abbe set a boundary on the field of microscopy. He came up with the resolution limit for optical microscopes, which is roughly half the wavelength of light. With a wavelength of 550 nanometers typically used, that means most microscopes can only see about 0.2 micrometers (or about the width of a bacterium), according to Abbe.

But the best thing about limits in science is that they can almost always be surpassed. And when you do that, you usually get a Nobel Prize. This year, the Nobel Prize in Chemistry was awarded to three scientists for their work in circumventing the optical resolution limit. That means they made microscopes even more micro. They’ve actually gone nano.

You see, a maximum resolution of 0.2 micrometers may seem pretty small, but it’s quite large when it comes to observing the tiny, individual molecules in the human body. A small molecule can be just one nanometer long.

With the help of these nanoscopes, researchers have been able to visualize molecules such as those created in synapses in the brain. They can also track protein buildup in numerous degenerative diseases, such as Alzheimer’s or Parkinson’s.

In fact, nanoscopy can even be used to visualize the individual proteins in fertilized eggs.

The Nobel Prizes were rewarded for two different methods of enhancing optical resolution. Stefan Hell of the Max Planck Institute for Biophysical Chemistry, developed a method known as stimulated emission depletion microscopy, in which two laser beams scan over a sample. One beam arouses fluorescent molecules to glow, while the second beam suppresses all other fluorescence except for that in a nanometer-sized area. The result? Only the nanometer-sized volume is registered by the microscope, and a brightly lit image with better resolution than 0.2 micrometers is revealed.

Eric Betzig and William Moerner received Nobel Prizes for their work in advancing the field of single-molecule microscopy. Though the two scientists worked separately, both of their methods involved turning the fluorescence of individual molecules on and off, using a molecule called the green fluorescent protein (GFP). Isolated from a fluorescent jelly-fish, GFP can be coupled to other proteins in cells, lighting up and revealing where the protein is positioned.

Moerner and Betzig discovered they could turn the fluorescence of GFP on and off at will, showing that it’s possible to control the fluorescence of a single molecule. The position of each glowing protein then can be easily picked up by a microscope.

The methods developed by these three scientists are currently being used all over the world.