EXCLUSIVE: Nerf’s Newest And Most Powerful Bow Is Specifically For Girls 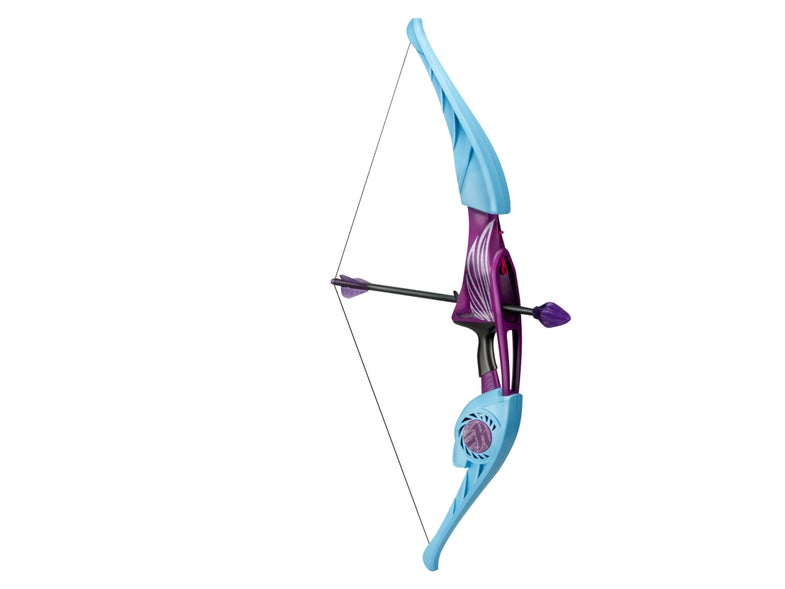 This week Nerf is announcing a behemoth addition to one of its iconic series: a bow measuring 4 feet in height, with totally redesigned, 24-inch composite arrows that can fire up to 100 feet, and aims truer with the first adjustable sight for the line. It’s the largest bow ever from the company by more than a foot, and it fires arrows the farthest of any toy they’ve ever made.

And it’s being marketed specifically to girls.

Since 2013, Nerf’s Rebelle bow has had ladies in its sights (we suppose perhaps due to the popularity of movies like “Brave” and the “Hunger Games” series with bow-wielding heroines). Michael Ritchie, the VP of Global Brand Strategy & Marketing for Nerf, says that the design of each bow and blaster in the Nerf Rebelle line “is informed based on feedback from our most important demographic: real girls.”

Ritchie says that girls want, essentially, the same thing boys do, just with their own personal style. “They’re looking for a bow that delivers power and performance, coupled with that true-bow action so prevalent in today’s pop culture trends,” says Ritchie. “Rounding out our design is a stylish edge that appeals to our core audience, including chic deco and detailed graphics.”

To be honest, I didn’t intend this story to be about gender until I realized the bow was being marketed to girls. It’s telling that I’d assume the bow had to be for boys: I was a young kid when the first ever Nerf Bow and Arrow came out back in 1991.

You’ll notice that commercial, while comically ‘90s, doesn’t feature any girls. Flash-forward about 25 years and the story (and product) are better. The color palate hasn’t changed much, but the technology has evolved, and the video editing is better. But the commercial–which promotes the most recent bow that is currently on shelves–features girls, not boys, using the advanced Nerf bows.

It’s not that girls never played with Nerf products–I can confirm that personally. I was regularly the target for my female cousins and neighbors, who often used my Nerf guns to attack me. And that’s the distinction: 20 years ago it would be the boys’ section where you’d find Nerf products. In my experience, the neighborhood boys would own them, and while girls often took part in weekend Nerf war, they were often forced to borrow what the boys owned, but didn’t want to use.

And maybe the Rebelle’s color scheme should have been a tip-off, but take a look at the 1991 commercial again. The color scheme hasn’t changed that much. It’s not that the bright colors were ever gender specific; on the contrary, Nerf has always made its products as gaudy as possible to avoid confusion for police officers over toy guns.

Nerf has been slowly but surely improving designs ever since: guns fire farther, plastic feels sturdier, and aesthetics are more eye-catching. Kudos to the designers: I often have to stop myself from buying Nerf guns as an adult. That’s awfully good reading of consumers to have an audience that goes from the too-young-to-play-safely extreme to the too-old-to-play-safely extreme.

But for the first time it seems that consumer insight drove Nerf to give girls not just ownership of something they’ve always loved, but of something arguably better than what boys have. This bow is the largest the company has ever made, and it fires the arrows the farthest (another, smaller “bow” fires darts that far in the N-Strike line).

I spent Christmas watching my niece and nephew shoot each other relentlessly with Nerf guns, so it makes me happy for her and girls her age that they’ve got something powerful to intimidate the boys with.

Nerf looks at it a slightly different (but no less encouraging) way: Ritchie says that, “With the release of the Platinum Bow, we’re providing a new way for girls to both emulate the active female characters they are looking up to and create their own new empowering play patterns.”

I’m sure that won’t last forever: the arms race is always a tight one when it comes to Nerf toys. But it’s nice to see that, at least in terms of marketing, there’s no second place consumer anymore.

Nerf Rebelle Platinum is designed for ages 10 years & up and will be on shelves later this year, retailing for about $60.

Correction: Nerf clarified that the length of the bow is 24 inches, despite providing earlier information incorrectly labeling the length as 27. We updated the article shortly after publication to include the correct length of 24 inches.