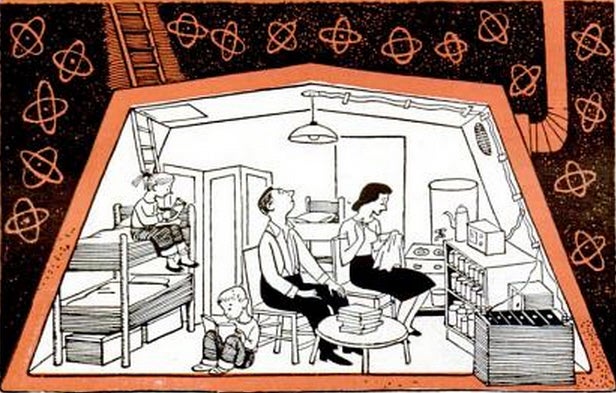 At 10:10 AM Eastern Daylight Time, the world ended. The announcement came through a news broadcast in a video trailer for Fallout 4, the latest in a long-running series of post-apocalyptic video games. True to form, it opens in the edifice of a proto-1950s robot-heavy utopia. A nuclear family–the name itself a cruel irony–flee their home for a vault, hoping the advanced cavernous shelter can save them from the imminent blast. The vaults are at the heart of the post-apocalyptic series, and while it’s a quaint Cold War throwback now, fallout shelters were a very real part of mid-20th-century life, as documented by Popular Science.

Bomb shelters first showed up in our pages in 1937, with World War II just on the horizon. This was a shelter for conventional bombs, one that could rely on the limitations of normal bombs and the strength of the ground itself to protect those hiding underneath. Apart from the materials used, in concept they’re not all that different from Estonia’s very modern Terramil shelters. The first bomb shelter predates the reality of nuclear weapons, and it’s that extra radioactive power and lingering doom that really spurs the specialized design of fallout shelters.

In September 1951, just two years after the Soviet union successfully tested their own atomic bomb, we ran a two-line ad that read “Atomic Bomb Shelter plans $1.50” and gave an address for readers to mail in. That’s quite the bargain price for surviving the apocalypse. An October 1951 profile of a merry-go-round car park notes that it would also serve as an effective shelter in the event of an atomic attack. By May 1953, the price of a shelter averaged between $40 and $100, as explained in “If Your House Were A-Bombed.” We had reporters on the scene for tests at the Nevada Proving Ground, where houses filled with department store dummies were built in the path of atomic blasts. Dummies above ground melted away, but those inanimate mannikins underground in a basement lean-to or concrete cube “corner shelter” survived the test.

These initial shelters were about protecting people from the blast, with little thought given to how the surviving occupants would persevere in the post-war radioactive wasteland. By the late 1950s, it became clear that, thanks to fallout, surviving the initial blast wouldn’t be enough for anyone hoping to outlive World War III. This 1959 shelter housed 40 occupants for 24 hours underground in Arizona, with some thought paid to filtering the air. By September of that year, we were looking at how a family of four might equip a “compulsory fallout shelter,” and imagined that a 49 feet2 area could work, complete with “beds, food, water, sanitation facilities, lighting and a radio.” There’s even the suggestion that tape-players play familiar sounds, like a refrigerator running, and that they paint the ceiling blue to remind them of the sky. It’s grim, but this design is only considered for five days, tops. 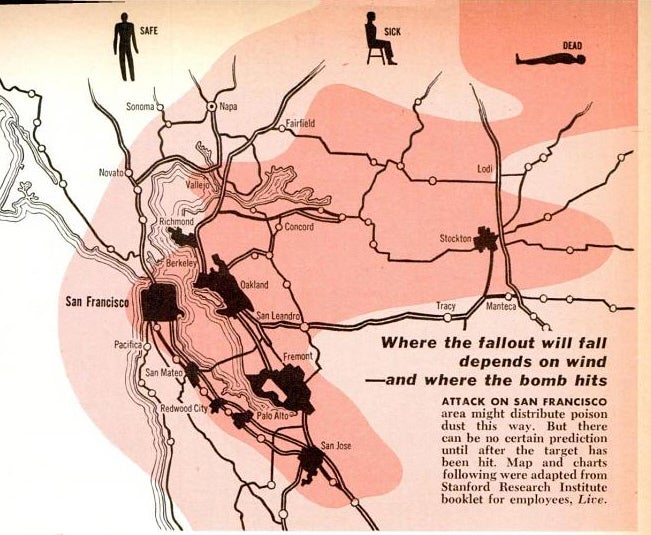 By 1960, shelters began resembling their more iconic design: a cylinder underground, with filtered air, and access by way of a ladder, all designed for a family of four. For $295, readers in 1960 could buy a steel shelter kit that according to its manufacturer, promised “radiation absorption cut by 99.5 percent.” Buyers would need to install it themselves and add sand. The more bargain-conscious wannabe apocalypse survivor could rent a mobile home site with accompanying fallout shelter for $5 for a month. Sensing a trend, “Plain Facts About Fallout Shelters,” compiled with help from the U.S. Office of Civil Defense, offered straightforward answers to such earnest questions as, “Wouldn’t an H-Bomb attack kill everybody anyway, shelters or no shelters?” (no) and, “Wouldn’t it be better to just load up the car and run for the hills?” (maybe yes and maybe no). The article also comes with a useful chart for how long it’s okay to spend on the surface each day after an attack, with the optimistic assumption that one can resume normal life after a year. This article yielded some skeptical reader letters.

Committed readers could find above-ground fallout shelters, houseboat fallout shelters, even a “fallout shelter in a bottle,” which was terrible advice about how drinking alcohol and eating glass would help someone survive nuclear fallout. (We do not recommend this under any circumstances, even the end of the world.) Artesia, New Mexico, built an entire elementary school under ground so it could double as a fallout shelter. 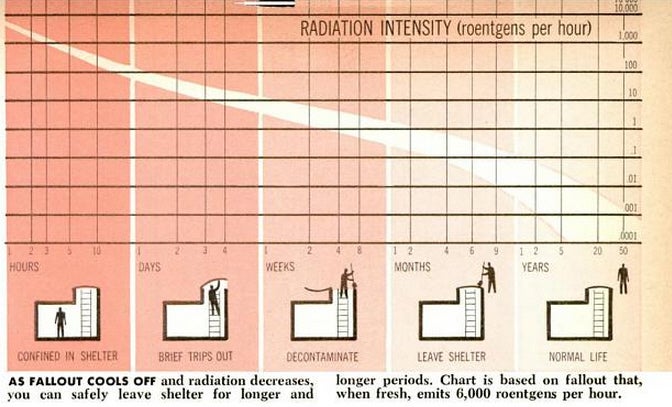 As the world continued not ending, the trend didn’t last. Multiple 1968 articles on home remodeling dismissed basement fallout shelters as a fad and an obstacle for new homeowners to design around. In 1968’s “Can We Ever Really Ban The Bomb?” was presented as a way to highlight the full absurdity of preparing for nuclear war. While bomb shelters made a brief resurgence in our pages in the early 1980s, they were just as likely to show up in an article about design as an ad for a boombox.

We are, thankfully, living in a time in which the threat of nuclear annihilation isn’t an everyday thought (or at least, fool ourselves into thinking this worry is in the past). Instead, we load up virtual worlds, and wander the ruins of what might-have-been instead, as a leisurely escape from the mundane safety of our lives.

Watch the world end in the trailer below: