There's nothing more formulaic than karting games--but in the new LBPK, gamers are encouraged to take that formula and blow it up. We talk to the game's creators to see why creativity can spring from restriction. 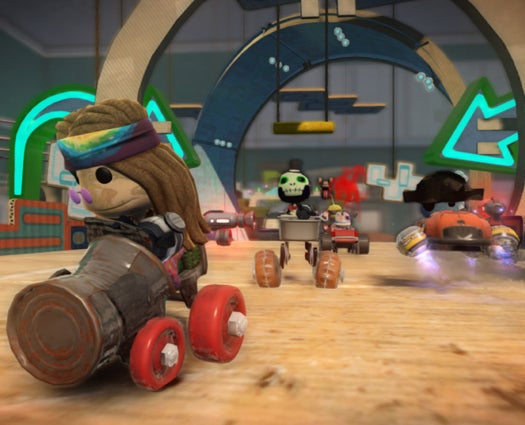 The LittleBigPlanet series has always prided itself on creativity; the motto was, in short, build the game you want. So when I heard the newest game in the series would be called LittleBigPlanet Karting, I was wary. Karting, where you take a bunch of cute characters, put them in easy-to-control go-karts, and race them around colorful tracks with obstacles and weapons, is one of the most formulaic of genres. It’s the kind of genre that’s perfect for a lazy, soulless adaptation of a kids’ movie–fill in the blanks with your characters and your weapons and your track themes, and done. What I didn’t consider is how those boundaries can set you free.

LittleBigPlanet, up until now, has been difficult to shoehorn into a genre. The first entry was, mostly, a platformer: Your little anthropomorphic sack character jumped its way through surreal, exotic, imaginative locales, solving puzzles to move forward. LBP 2 was another step ahead, and spun not as a “platform game” but as a “platform for games.” (I’d think that was too-clever PR if the game wasn’t so fun.) Its level-creation tools became not just a fun bonus, but the real enduring value of the game itself. A cultish community built itself up around it, using the level creation tools to forge their own interpretations of the game and let other fans play them. That became LBP 2‘s triumph: The game was handed over to the players, and they brought it forward more than a single creative team ever could. It was a game that didn’t fit snugly into a genre; it was whatever the contributors wanted to contribute and whatever the players wanted to play. And key to that is that the platformer is also a formulaic genre, also, oddly, well-suited to licensing from Dreamworks Studios for their newest awful Shrek movie. Jump from thing to thing. Don’t let a bad guy touch you. Present game as gift to child at holiday.

LBP isn’t the first game to toy with a level-creation idea, and it won’t be the last. In the PC gaming days of yore, level creation meant building something–your coaster in Roller Coaster Tycoon, your character in The Sims_–then watching what you make unfold. Now we have something more interesting: What we make we can share with other people, then have them explore it themselves by actually being a moving part (a playable character) in a level. In modern games, _Minecraft and LBP are two of the best-known examples. But here’s the difference: In Minecraft, you’re given completely free reign; you get the tools and get to build what you want. That’s an amazing thing, but there’s a reason a competitor like LBP gets the full weight of Sony thrown behind it for releases. You get all the tools you need from the start, of course, but it’s built around something you know. The platformer (or in this case karting) really is a platform to create a level, or even a whole game, that’s unique.

It seems hard to respin something into an open-source gaming platform when it has a well-established genre latched onto the end of the title like an oversized caboose. (Up next: LittleBigPlanet: Cyberpunk.) At a PlayStation event last week, I ran through the opening level of LBP Karting to get a feel for the controls. It felt like a lot every other racing game in its style, more in line with the Mario Kart series–in aesthetics and controls–than the LittleBigPlanet I’d remembered. You race through a track, picking up weapons to slow down your opponents or speed yourself up on your way to the finish line. It was fun, sure, but felt like a step back. What were the developers, United Front Games, thinking? Did Media Molecule, the original LBP team that signed on to help, think this was a good move?

So I talked with Jenny Timms, a producer, and Mark Riddell, a game designer who worked on LBP Karting, about the best way to cede control over to the players. They explained how expectations that seem like a door end up being a window.

The way Timms explained it, it’s tough to create a truly open experience without some grounding. LBP Karting is easier to stomach than LBP Whatever You Want We’re Not Your Mother. “First and foremost it is for making karting adventures,” Riddell says, but if someone wants to make a lunar lander adventure (someone did), that’s cool, too. In other words, Timms says, the barrier to entry needs to be low, then the people who make truly creative, unexpected things will come out–make “their masterpiece,” as Riddell puts it. There are certain things you expect when playing a racing game (if you don’t expect those things, you’ll pick them up quickly) and that creates a framework. Understanding the rules of the game is important to throwing out the rules of the game, and everyone understands karting.

One of the first steps to enabling new level-creators, Riddell says, was to build a level playing field. The developers made the tools, then everything they created in the game, including the single-player story, was made with those tools. Not just the tracks, mind you–even the cinematic sequences can be constructed using the tools. That means the players can do everything the developers do, whether constructing a brief mini-game or a full narrative with camera transitions and animation. A player could, if they were so inclined, remake the developer-built single-player mode of _LBP Karting_–then tweak it to suit their needs. The developers were in the exact same position as gamers will be, creating with tools they’ve never used before. The developers found that that grounding set them up to create unexpected, imaginative things.

The tools start off simple, but grow more complex. If you start off with a framework like karting that everyone understands, it encourages players to mess around. Then as they grow more advanced, they’ll reach for the more complex tools and start disrupting the whole system. Sure, it could’ve been a completely open experience, but basing the game on something familiar and waiting for someone to create a first-person shooter version of it is more effective–and, so much weirder and more satisfying. (Someone did that, too.)

The crew saw that idea in action when they passed it onto to players for testing and watched the results unfold. At first, they needed to adjust to creating the world, but after a while they got the hang of it. By the end, Timms says, the developers would sometimes think, “We didn’t even know we could do that in this game.” In that sense, it’s a game that isn’t shipped “finished”; it ends when contributions stop being made to it. What is shipped in it is something the player (the potential creator) already understands.

For a lot of people playing, this is just going to be a pretty good kart game. But, if you want, it doesn’t have to be: the restrictions of a karting game can be the “stepping stones” (Timm’s words) that lead you to something else that you might not have anticipated. You don’t have to look far to see that idea in action, even past the videogame world. You can see it in the punk-blues of the two-piece The White Stripes, who give themselves crazy restrictions when recording an album, or in the stanza requirements for a sonnet, or even in Twitter’s 140-character limit.

I can’t say if what I saw will be similar to what players will do with LBP Karting when it’s released in November–what I saw were creations by the creators, and they’ve spent more time with the game than most any player will. Still (and LBP might not be the game to do this) it shows how we’re heading in a direction where the creators, if they want to, don’t matter much at all–as long as they provide a ladder for the players to climb up as high as they want. You can take that as a slightly scary outlook (what about artistic intent?!), but it’s also an exciting one. LittleBigPlanet isn’t the first game to toy with this idea, but it’s one of the most visible, and LBP Karting could make for an especially interesting experiment: With this setup in place, could the creators alter the conversation for their game even if they wanted to? The creators have deemed it LBP Karting, but if the LBP faithful want, they could veto that idea. (I don’t think most will do that, but I suspect at least some will.)

That, to me, is what makes this an interesting case study in level-creation games. Being able to create your own worlds, with only some guidance offered by the creators, is something unique to games as a medium. But, paradoxically, it seems like the way to make that an option for a mass audience is to start out with formula and structure, and trust that users will not only master the tools but use them to break that very formula. Rules to break rules. I just hope the game lives up to its potential.