A Space Game Gets Real

A crowdfunded video game aims for the most realistic spaceflight we've seen yet. 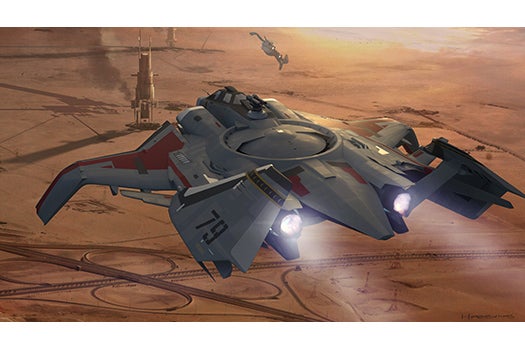 The revelation of the hit PC game Star Citizen isn’t that people love space-flight—we knew that. It’s that they like their games as realistic as possible, with a universe obsessively hewing to Newton-ian physics for even the smallest detail. The crowdfunded Star Citizen features player-controlled spaceships that travel through a virtual universe governed by the same forces as our own. For example, designers modeled each ship’s landing gear to retract without interfering with the hydrogen fuel system that feeds the nuclear reactor. Then they have to animate heat shielding to close over the landing gear so that the ship can safely pass through an atmosphere. The same commitment to detail applies to piping, working gauges, cargo-loading equipment, Gatling guns, toilets (really), LCD screens with real-time readouts, and so on. The game—which will feature its own virtual economy in addition to events such as pirate attacks and planetary catastrophes—will gradually release over the next two years in successive modules, like chapters in a book. Here’s what players can expect:

1) Players can purchase virtual ships for $25 to $1,250 (in real money), depending on model and availability. In June 2013, Star Citizen became the most crowdfunded project ever, at $10 million. Many people who ponied up knew they would have to wait more than a year, in some cases, to play.

2) Between six and 16 thrusters move the game’s ships, and each one is assigned its own max power, accuracy, condition, and response time. As a ship sustains damage and its cargo is loaded, unloaded, or lost, its center of mass changes and the thrusters no longer operate in harmony, which introduces yawing and other issues.

3) Realistic G-forces affect the arc of the game. Pilots who neglect to properly stow cargo risk having it bounce free during evasive maneuvers, potentially injuring crew and damaging or destroying the craft. Tempted to take on extra cargo to pad profits? That might strain the ship’s components.

Evolution of a Megahit

10/10/12 Crowdfunding campaign begins—and reaches its $2 million goal before the end of the month.

08/29/13 A hangar module launches, allowing backers to “walk around” inside their ships.

06/04/14 A dogfighting module releases that lets players battle the computer—and other players—in one of three ships.

Late 2014 A first-person shooter module is set to be introduced.

2015 A planet-side social module will be added, allowing players to explore cities.

2015 The single- player military campaign Squadron 42 is slated to release as a stand-alone game within the Star Citizen universe.

Late 2015 Early public testing of the universe will begin as the game’s designers pull together various modules.

2016 Star Citizen will become available as a seamless universe with modding tools and the ability for players to host custom servers.