Arrays of Tiny Cameras Can Shoot Pics, Then Re-Focus Them After the Fact 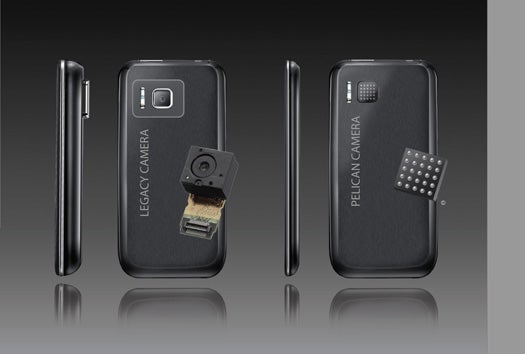 It might seem like the problem with cell phone cameras stems from packing an imaging apparatus into such a small space. But California startup Pelican Imaging wants to up your cell phone’s image quality by packing 25 cameras into the same space. The company claims not only does their camera-array technology produce better image and video quality from a slimmer overall device, but it also does some things that a conventional single-lens camera cannot.

Pelican’s tech works by essentially taking 25 different photos and stitching those small photos into one larger image. Without getting to deep into the details, this improves the image quality by capturing more light on more sensors rather than spreading the limited light that those tiny cell cam lenses collect over a single high-megapixel sensor (this is one reason why your cell camera images are so dark). Those 25 images all overlap, so the software has a lot of pixel data to work with when it stitches your image together.

But that’s just the beginning of the potential for this innovative little concept; its so-called “light-field photography” also lets you manipulate an image before and after you take it. And we’re not talking about adding cheap Hipstamatic filters to an image; you can adjust the focus after the fact to sharpen your subject or to blur the background.

The multiple lenses also add a degree of 3-D depth, allowing for whole new applications. That doesn’t mean it simply lends itself to deeper images and video, but also to features like gesture control. So that front-facing camera in your tablet or phone could at some point in the future allow for a touchless interface.

On top of all that, the Pelican assembly is actually smaller than the conventional single-lens camera assemblies in many cell phones. That means Pelican’s technology could actually trim some bulk off your next pocketable device. Even if it doesn’t, at the very least it could help you fix the focus on all your gritty concert pics.