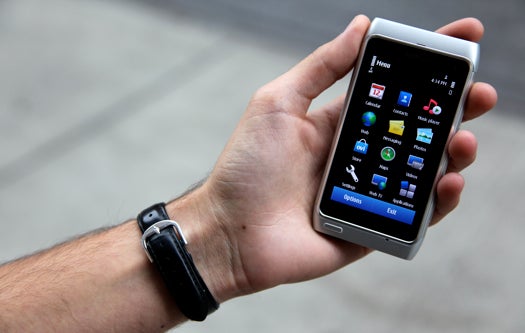 Nokia’s N8 comes with lots of firsts for the venerable Finnish phone-maker. It’s the first Nokia multitouch phone, the first with a 12MP camera–even the first with a nigh-indestructible Gorilla Glass screen. But what’s notable about the N8 isn’t one of its firsts, but its lasts: It’s the last N-series phone to use the aging Symbian mobile operating system. And that’s a very, very good thing.

The N8 is a halfway point between the Nokia of old and the Nokia of the future. It takes several steps towards modernity, but like its predecessors, is held back by the limited capabilities of the decade-old Symbian OS. Luckily, it’s also the last N-series phone to use Symbian–forthcoming N-series devices will use the very promising-looking MeeGo OS, an open-source collaboration between Nokia and Intel. And that’s encouraging; Nokia’s N-series phones are blessed with great hardware; without their Sisyphian stumbling block, they could be capable of something great. 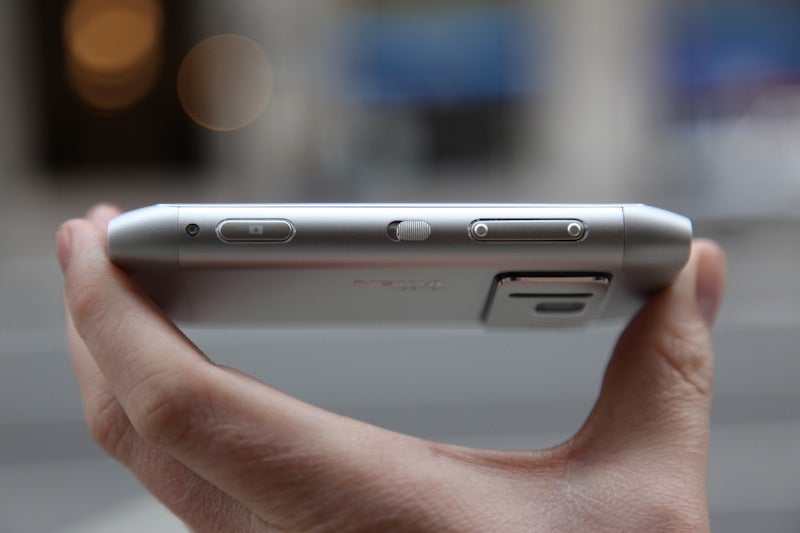 The N8 is new, or at least new-ish, both inside and out. On the hardware side, it’s got a 3.5-inch multitouch capacitive screen made of incredibly strong Gorilla Glass, with a sleek brushed-aluminum body. It’s not particularly thin–about the thickness of a Motorola Droid, and quite a bit thicker than the iPhone 4–but it’s not too thick, either. It’s Nokia’s first phone to pack a 12MP camera on its back, which can also capture 720p HD video (an HDMI-out port can play them on your HDTV).

It’s also the first Nokia phone to use Symbian^3, which streamlines the Symbian experience for a modern capacitive touchscreen.

The hardware is pretty great, for the most part. The camera in particular lives up to its billing and then some: Autofocus is quick and accurate, shutter speed is as good as I’ve ever seen in a smartphone, it’s got tons of options, and, most importantly, the thing takes really good pictures:

Color reproduction is more accurate than the overly vivid iPhone 4’s and sharper than the Droid’s, and it’s faster than either. The body of the phone feels very sturdy, as if it could withstand more than a few drops–and with its Gorilla Glass screen, it probably could. Battery life is also excellent, lasting at least a day and a half between charges in our informal tests. 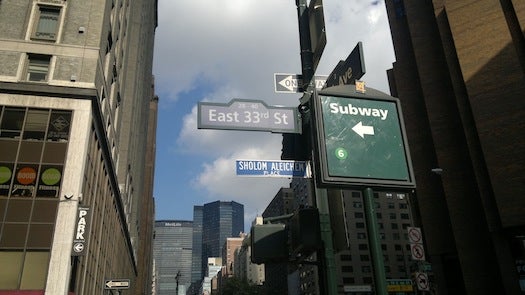 The software is a step up from previous Symbian phones, eschewing that confusing double-tap interface for a single-tap mandate. The screen is very responsive, despite the phone’s relatively anemic 680MHz processor, rarely lagging or stuttering. The Ovi Store, Nokia’s app store, is easy to navigate (though it doesn’t come pre-installed, for some reason), and the multimedia capabilities have been revamped for the better–its format support in particular is quite good, playing back most files I threw at it. Multitasking worked great as well, boldly swiping Palm WebOS’s “card” interface (but that’s fine with me; it’s a great idea, after all).

Lord, where to start. Symbian^3 is ridiculously confusing, even for us here in the Pop Sci offices. Trying to change any setting involves stumbling through countless menus and sub-menus that are often unclear or misleadingly named, and encountering at least a few error messages (some of which contain typos) that most users will find completely incomprehensible. (On failing to connect to a Wi-Fi network: “Default EAP settings saved. Advanced settings can be edited in security settings of access point.”) 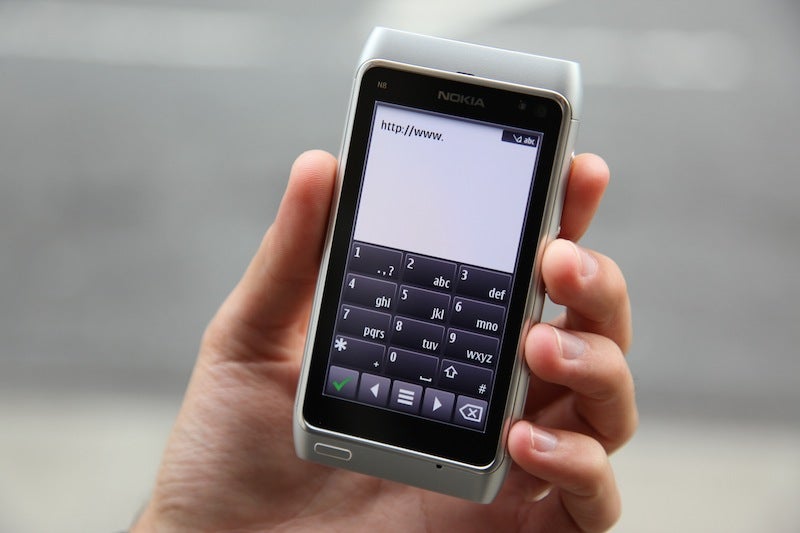 The phone relies on a software (on-screen) keyboard, like the iPhone and many Android phones. But the keyboard is aggressively bad, assisted in its mission to frustrate by the phone’s slightly smaller-than-average screen. Both the portrait and landscape keyboards take up the entire screen, so you’re never sure if you’re typing in the right text entry box. The portrait keyboard, unbelievably, is not a QWERTY: It’s a keypad-style layout, forcing you to either use T9 or that triple-tap technique straight out of 1998. It is, frankly, perverse.

The Ovi Store has been revamped, but the N8 is currently in a sort of app limbo: Many older Symbian apps won’t work with Symbian^3, and certainly those future MeeGo-powered N-series phones won’t have backwards-compatible apps. So the Ovi Store’s N8 offerings are slim and could very well stay that way. Even worse, lots of essential apps, including Google’s offerings like Maps and GMail, are nowhere to be found in the Ovi Store. That leaves you with Nokia’s vastly inferior and painfully slow Ovi Maps, which managed to locate neither my favorite coffeeshop nor the restaurant at which I had reservations–not even while I was standing inside them. I should also add that the Ovi Store force-closed on me several times, requiring me to reboot the entire phone before it worked again. 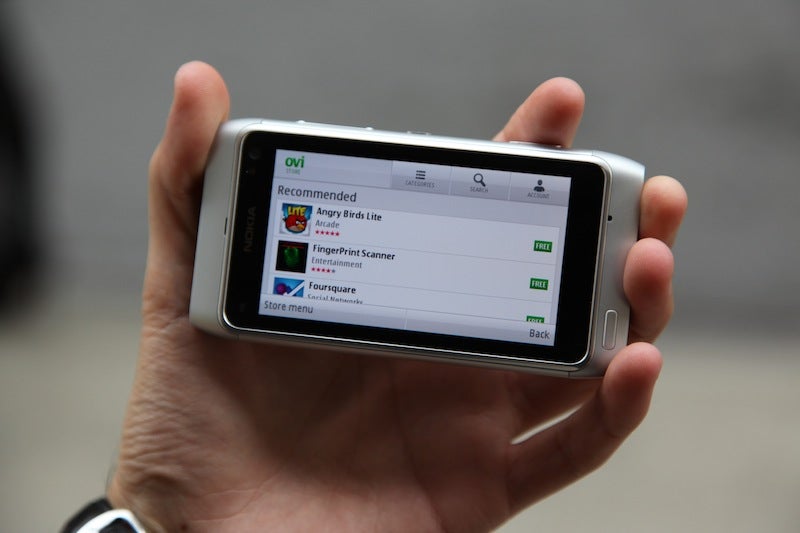 Nokia has taken a page from Android’s book with its homescreen, which is heavily widgetized and customizable, to a point. It has three pages, each of which is wide enough for four items–and only four items. Widgets have to be four items wide, and individual items (like, say, apps) can only be added in groups of four. Bizarrely, you can’t move widgets or apps: You have to delete them, and then add them again, which involves a lot of scrolling through lists. So if you want to switch the locations of two widgets, you have to delete both of them, then add them both again in the right order.

Basically, you’ll be tempted to really test out the N8’s sturdy body and screen by hurling it against a brick wall in frustration.

$549, unlocked. A GSM phone, the N8 will work with AT&T and T-Mobile in the States, but has not been picked up by either network. As of now, you’ll have to pre-order it unsubsidized.

The Nokia N8’s hardware is actually quite nice, despite its unimpressive processor, and the camera is fantastic. But that doesn’t change the fact that Symbian^3 is a tremendously infuriating phone operating system to use, one that battles its user at every turn with an arsenal of endless menus, unintuitive controls, and baffling error messages. As a phone, one that people will use to browse the Internet, play games, communicate, and find information on the go, it’s impossible to recommend in the face of so many better options. 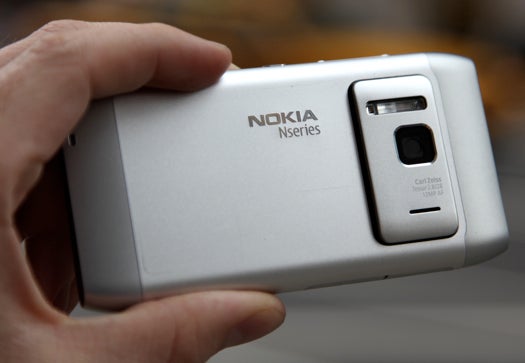 The N8’s 12MP camera protrudes a bit from its back.

Stepping back, Nokia’s situation is very similar to what’s happening over at Microsoft. Windows Mobile 6.5 was a blessing in disguise: That last iteration of Windows Mobile was so bad, so frustrating, so wrong in the most obvious of ways that Microsoft finally broke, and trashed the whole thing. That gave them the freedom to create Windows Phone 7, an exciting and innovative replacement that has absolutely nothing in common with its predecessor.

The N8 proves that Nokia can still make a hell of a piece of hardware, and with a new OS on the horizon, the Finnish giant might just be able to turn the disaster that is the N8 into something great. Microsoft did it, and there’s every reason to believe Nokia can too.