Doodles in the National Archives

If you’ve ever doodled during a meeting you’re not alone, though your doodles might not be preserved for the good...

If you’ve ever doodled during a meeting you’re not alone, though your doodles might not be preserved for the good of the nation. The National Archives and Records Administration in Maryland is committed to preserving the documents that make up our shared history while allowing anyone to access almost anything they want. NARA’s rules are so strict you can’t take a pen or a water bottle into the reading room. And these rules seems sort of odd when you look at some of the things that are being painfully preserved in the archives. Like an agenda from the thirty-ninth meeting of the Interdepartmental Committee of Scientific Research and Development. Apparently one attendee spent equal time taking notes and doodling all over the page. 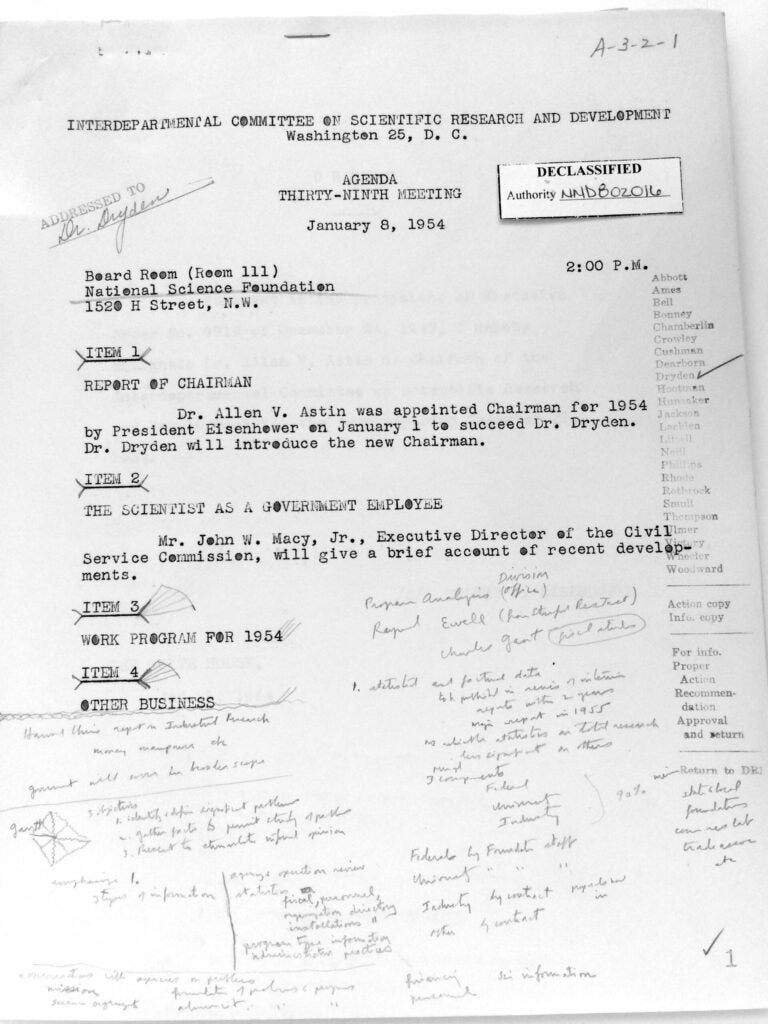 The Interdepartmental Committee on Scientific Research and Development was established on December 24, 1947. The idea for its creation came in a letter from President Roosevelt to Dr. Vannevar Bush, Director of the wartime Office of Scientific Research and Development. Roosevelt wanted to be sure that technological lessons learned during the Second World War were incorporated into future American research and development programs. Bush recommended, among other things, the foundation of an inter-bureau committee or council that would pull together representatives of the principle scientific bureaus in the country.

The committee purpose was to oversee and manage problems facing federal and governmental research groups. This included classified research programs, broad impact science programs, and any programs that could benefit the public. Among the participating organizations were those that went on to impact the nation’s foray into space: the US Army, Navy, Air Force, and National Advisory Committee for Aeronautics (NACA, the predecessor organization to NASA).

The Committee first met on April 16, 1948, in the East Wing Conference Room of the White House. It went through a host of chairs in the years that followed. Notable, head of the NACA Hugh Dryden served as the committee’s chairman between January 1, 1951, and December 31, 1953. Dryden was succeeded by Dr. Allen V. Astin, Director of the National Bureau of Standards, who chaired the committee during 1954 and 1955.

Astin was this the one in charge during the committee’s thirty-ninth meeting on January 8, 1954. Items on the agenda that day included a report from Astin, comments about the scientist as a government employee, a look ahead at the work program for 1954, and time set aside discuss other business, which likely would have included discussions relations to the impending International Geophysical Year.

I found a copy of this meeting’s agenda in a Dryden file in the National Archives, and really, it was the notes and the doodles that caught my attention. It’s not entirely clear that the copy was handed to Dryden, but either way: it seems that even for the men on the cutting edge of science at the time, not everything was totally fascinating. I thought this page, sitting amid the boxes of detailed memos and program notes, was a really neat little insight into the human side that helped shape our modern technological world.

_Sources: Norman T. Ball, Executive Secretary of the ICSRD (e-book from UMich); Agenda for the thirty-ninth meeting of the Interdepartmental Committee on Scientific Research and Development. _