Look Into The Face Of Gnathostoma Spinigerum, A Worm That Infects Eels… And People

A team of U.S. researchers found the microscopic worms in 28 percent of eels sold live in U.S. markets. 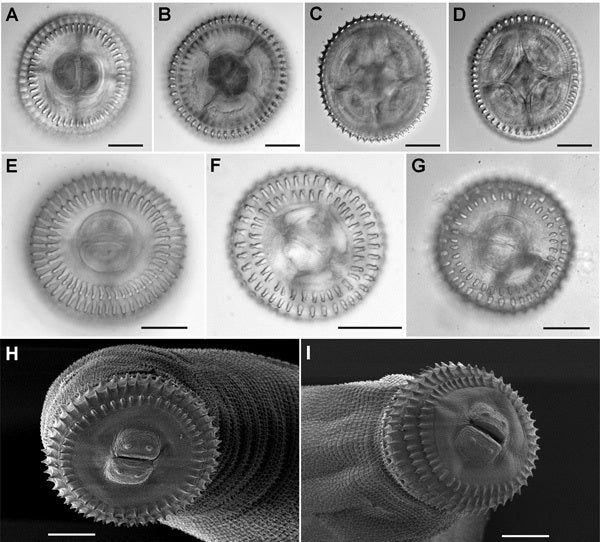 Aww, aren’t they cute? These are scanning electron microscope images of nematodes of the species Gnathostoma spinigerum. You could get these little critters from eating imported eels that are sold live in markets. Adorbs!

The images come from a new paper published in the journal Emerging Infectious Diseases. A team of U.S. Geological Survey scientists bought 47 swamp eels of the species Monopterus cuchia from markets in Atlanta, Georgia; Orlando, Florida; and New York City’s Manhattan Chinatown. Thirteen of the eels had Gnathostoma spinigerum nematodes, which are able to infect humans when they (the nematodes) are just the right age.

Infection, in short, sounds horrifying. People get infections from eating raw or undercooked, infected eels. Once the nematode larva enter the human body, they migrate around in the tissues for years, causing intermittent swelling just below the skin. Sometimes the larva decide to burrow deeper in the body, say to the organs or the central nervous system. If that happens, it can be fatal.

Most Gnathostoma infections in the world happen in Southeast Asia, the U.S. Geological Survey team writes in their paper. Monopterus cuchia eels—and their worms—are native to Asia. Most of the eels the researchers bought were legal imports from Bangladesh, they found. Human Gnathostoma spinigerum infections are rare in Bangladesh, the researchers added, although 40 percent of dogs there are reported to harbor the worm.

It doesn’t seem that anyone has ever gotten a Gnathostoma infection while in the U.S. However, scientists worry that the nematode is spreading. In 2009, two British researchers wrote about seeing infections in tourists who visited southern Africa, which isn’t a natural home for Gnathostoma worms. Increased trade in live foods, as well as ever more adventurous tourists, may make the infections more common outside of Asia. While I applaud adventurous eating—and am personally a fan of eel—maybe the next time you order swamp eel, you should make sure it’s well cooked.