Can Science Build A Fake Wine That’s Just As Good As The Real Thing? 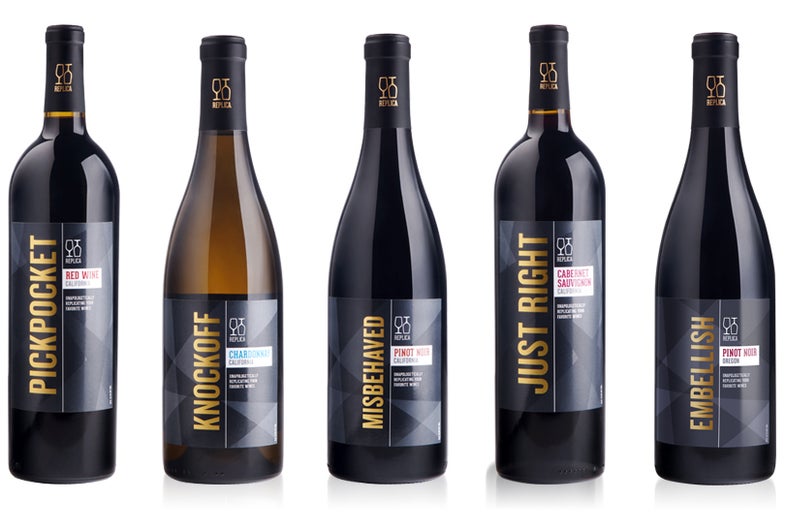 A new business called Replica Wines claims to produce “master forgeries” of well-known wines, deploying a throng of chemical instruments and a huge flavor database to blend near-identical versions of the wines from different grapes.

Ava Winery, meanwhile, takes a different approach, bypassing grapes entirely, and going straight for the molecules — combining flavor chemicals with ethanol and water to reproduce the experience of wine, without replicating the process.

It should be noted that it’s a bit unfair to compare the two. Replica is part of an established company — the Colorado-based Integrated Beverages Group — with a line of commercial products and a team that includes a master sommelier and several distinguished winemakers. Ava is more of a lark, a thought experiment that might never have germinated outside of the hothouse conditions of San Francisco start-up culture. Its initial offering, a bottle of imitation 1992 Dom Perignon, is not yet for sale — and may never be. But these two very different companies showcase the ambitions, and limits, of chemical analysis when it comes to subjective qualities such as flavor.

According to Replica, its patent-pending proprietary method represents the “ultimate science and wine pairing,” one that “takes the guess-work” out of making good wine. Working with Ellipse Analytics, an independent analytical chemical laboratory, the company claims to have assembled the world’s largest database of alcoholic beverage flavor profiles — essentially, a database that pairs chemical markers with sensory effects.

To duplicate a wine, laboratory staff at Ellipse analyze and quantify its characteristic “macrocomponents,” such as acidity, sugars, and tannins; and “microcomponents,” volatile flavor chemicals such as linalool and methoxypyrazine. A panel of trained tasters also produces a subjective flavor profile, a record of perceived flavor notes and intensities. The goal is to align chemistry with sensory experience, using base wines from the company’s own vineyards, as well as additional wines sourced from other California and Oregon winemakers, to make a blend that mimics the original. It’s an iterative process, with analytic laboratory’s results serving to guide the hands-on work of winemakers.

Once Replica’s blend can effectively pass for the original in sensory tests, the laboratory then confirms the accuracy of the copy. “We ensure at least ninety percent chemical similarity to the wine by which each was inspired,” promises Jaclyn Bowen, president of Ellipse Analytics.

Ninety percent sounds good, but given the exquisite sensitivity of the human sensorium, even a tiny difference, molecularly speaking, can matter quite a bit when it comes to actual flavor. So how does it go down? A tasting last week in the Popular Science offices in Manhattan placed Replica’s Pickpocket side by side with The Prisoner, the popular and critically praised California red blend that “inspired” it. Although I’m not personally a huge fan of this style of red wine, the two were comparably big-boned, juicy, and smooth-drinking, and a similar deep purple color in the glass.

Ari Walker, the company’s president, noted that there are some differences; Replica’s alcohol content, for instance, is 14.9 percent, versus the Prisoner’s 15.2 percent. Nonetheless, it was difficult for this untrained (but enthusiastic) taster to precisely pinpoint the quality of the slight distinction. Certainly, if someone had poured me a glass of one after I had quaffed a glass of the other, I would not have suspected that anything was amiss. At a retail price of $25 a bottle — about forty percent less than The Prisoner — it seems like a pretty good deal.

Pickpocket is set to go on sale on May 31, along with four other Replica wines, all deliberately priced well under the retail prices of the “real thing.” The company has cleverly dubbed each of its wines with a name that alliteratively suggests the original — for instance, Replica’s Knockoff Chardonnay is “inspired by” Kendall-Jackson’s; Misbehaved is modeled on Meiomi Pinot Noir —inviting shelf-side comparison on alphabetical displays. The company’s pitch is to price-conscious but savvy consumers, who are more interested in the bottom line than in romantic myths of winemaking. “Originality is overrated,” the company’s tagline reads, “Especially when it’s overpriced.”

Walker, Replica’s president, calls this approach to winemaking “disruptive.” But is it, really? There’s nothing inherently novel about pairing science and wine; just ask Louis Pasteur. Contrary to visions of agrarian simplicity, wine is a profoundly industrialized product, and a huge global business, exceeding $250 billion dollars in annual sales. Science and technology inflects every aspect of wine production. According to Dr. Andrew Waterhouse, professor at wine chemistry at the University of California, Davis, many wineries and winemakers already try to duplicate the flavor and style of top-selling or well-reviewed wines; it’s a commercial necessity in a crowded market. There is a whole industry of wine consulting laboratories, such as Enologix and ETS Labs, which help winemakers shape their vintages to suit consumer tastes and trends. What’s unique about Replica, Waterhouse says, is simply that it’s openly admitting to the copying.

Ultimately, the “master forgery” angle is a cool trick, but it’s also a bit of misdirection. Replica’s goal, ultimately, is not to make an indistinguishable “forgery” that could fool professional wine snobs, but to consistently make wine that lots of people like, based on the wines that people are currently buying and drinking and enjoying. The big mystery here is not what makes wine taste the way it does, but what makes you like it (or, more to the point, what makes you buy it).

Despite the company’s boasts about its proprietary methodology, it’s striking how traditional some aspects of Replica’s approach and philosophy are. For instance, Walker, the company’s president, is adamant that the company would never use its methods to try to duplicate a terroir-specific wine, one made from grapes grown only on a specific parcel of land. Those wines, he suggests, have a uniqueness of character that would be impossible to replicate without access to the grapes themselves. Both he and Brett Zimmerman, the master sommelier who serves as the company’s Chief Wine Officer, seem appalled when I ask if they would ever add flavor chemicals to their wines to enhance the quality of the resemblance.

For the folks at Replica, winemaking may be guided by the chemistry lab, but, as ever, the real work is in the fields and in the cellars, with the vinologists who cultivate the grapes and the winemakers who process it into wine. In the final accounting, Replica wines are made the way most of the wines we currently drink are made: employing experienced technically trained workers, using a range of advanced technologies, thoroughly informed by scientific data and commercial realities.

Ava Winery is another thing altogether. In fact, it’s questionable whether it can legally call itself a winery at all, or label its product as wine. Founded last year by Mardonn Chua and Alec Lee, former college classmates with backgrounds in biotech and science education, Ava originated out of a wish to make the most exclusive wine experiences accessible to all. Seduced by an unattainable bottle of 1973 Chateau Montelena, the California Chardonnay wine that vanquished France in the famed “Judgment of Paris,” Chua and Lee wondered whether they could reproduce it chemically, molecule by molecule, without ever touching a grape. With synthetic chemistry, they could turn “water to wine in fifteen minutes.”

This is not entirely unprecedented. In the nineteenth century, synthetic chemicals were used to add distinctive flavor and specious value to neutral spirits; an 1858 editorial in Scientific American railed against chemists who peddled “flavorings to produce, at a moment’s notice, any desired liquor,” from Catawba wine to old whiskey. More recently (and more respectably), Thomas Hofmann, a flavor chemist at the Technical University of Munich, has produced mixtures of synthetic chemicals that faithfully reproduce the aroma of certain wines, using techniques that combine sensory and chemical analysis — a methodology similar to that used by Replica.

Suffice it to say, neither Chua nor Lee have any experience with winemaking, nor with flavor chemistry — although the co-founders are working with a sommelier, who has asked to remain anonymous. (“He has encountered a decent amount of disinterest in this from his colleagues,” Lee told me.)

For Ava’s “first edition,” a synthetic version of 1992 Dom Perignon, the company has sent samples of the vintage to commercial analytic laboratories, which use various forms of gas chromatography and mass spectrometry to isolate and identify its components. The challenge is interpreting those often inconsistent results: figuring out which compounds contribute to flavor, obtaining those compounds from chemical suppliers, and then recombining them in the proper quantities, a steep challenge given that some flavor compounds are used at concentrations of parts per billion or less.

So how does it taste? Reports of early versions have been less than alluring. Lisa Grossman at New Scientist detected evocative notes of plastic pool shark and raw gasoline in her recent tasting of an experimental “moscato.”

In addition to refining the formula, Ava must also clear considerable licensing and regulatory hurdles before the company can sell any alcohol. Curious quaffers can sign up for one of the 499 bottles of faux 1992 Dom ($50), but they won’t be charged for it until all of these issues are resolved.

Lee admits that this is, technically, an extremely difficult project, but insists that it’s not nearly as challenging as other ongoing attempts to produce synthetic food, such as lab-grown meat.

Lee sees Ava as part of a vanguard of technologically driven start-ups working toward a radical transformation in food production, a peer of companies such as Soylent and Impossible Foods, who have no reverence for the agrarian lore of “working the land,” and instead embrace engineering ideals such as efficiency and transparency. Indeed, Lee argues that Ava is much more transparent than the “vast majority of the wine industry,” where additives are used, but kept out of the limelight. Chua, his co-founder, published his complete formula from an earlier attempt to “hack wine” — a Kendall-Jackson chardonnay — to Reddit earlier this year. “Our customers definitely know what we’re making,” Lee says.

In this light, the company’s ambitious choice to attempt to replicate wine — a substance with profound importance throughout human history and culture — is crucial to understanding their project. “Something romantic just exists about wine itself,” Lee explains. If the company succeeds in chemically replicating such a “significant part of the cultural food chain, that’s when we really start to change people’s minds.”

Lee envisions a future where all food will be synthetic, and where our appetites will be gratified on demand by automatic replicators. “You tell your replicator what you want and then you eat it. You enjoy it. There’s nothing scary about that.” He concedes, “I might be wrong about the timescale. It might not happen in my lifetime,” yet assures me, “it’s an inevitability.” In that regard, Ava “wines” can be seen as a means of defusing the cultural and commercial landmines that persist around the word “synthetic.”

So, if you’re looking for a well-made and reliably crowd-pleasing wine at a modest price, don’t hesitate to pick up a bottle of Replica, and be sure to lift a glass to toast the science of winemaking.

But if you want to take a chance, and fully embrace the synthetic lifestyle, then sign up for an edition of Ava. It probably won’t taste like a million bucks, but it just might taste like the future.