What about the balloons? 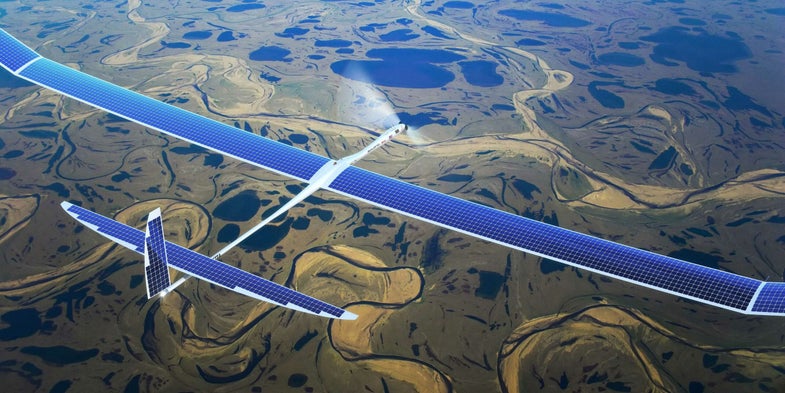 It seems if you control a large portion of the internet, you have vested interest in getting the internet to more people. Both Facebook and Google have been testing aerial devices that would be able to provide reliable wireless internet access in remote locations. Until now, Facebook had Aquila, its solar-powered drone armed with Wi-Fi lasers, and Google had Project Loon, huge balloons with transmitters. Both are supposed to literally beam internet from the sky, but both have been confined to limited tests so far.

And now it seems Google has had other tricks up its sleeves to accomplish this goal, according to a new report by The Guardian. The search giant is reportedly testing multiple solar powered drones, and has been since last summer in a remote New Mexico airspace called the Spaceport Authority, according to the Guardian‘s sources. The space was originally meant to house Virgin Galactic aircraft.

The technology allegedly used in the devices is not the cell service used by everyday people — at least, not yet. Google is testing 5G wireless internet, which could transmit more than 40 times faster than our 4G LTE service. However, at the reported transmission frequency, 28 Ghz, the signal would also fall off ten times quicker than 4G LTE, so serious power is required in focusing the transmission.

These optionally-piloted aircraft called Centaur, among other drones from Titan Aerospace, which Google acquired in 2014. Google has had problems with the Solara 50, a drone acquired when they bought Titan. In May 2015, the drone crashed because of apparent wing failure, reported by some media outlets in May, and confirmed in a National Transporation Safety Board report last week.

It’s not certain how these drones fit in with Project Loon, but the Guardian does say that they’re under the same umbrella of Google’s Access team, a group like Facebook CEO Mark Zuckerberg’s Internet.org, which looks to bring internet to the world. There’s also Google’s Project Wing, a play to deliver packages which has been largely overshadowed by Amazon’s efforts in the same area. (However, crossover in this regard seems unlikely, because of the disparate size in drones.)

In any case, the race to provide the next generation of internet just got a little tighter.

This article was updated to reflect the NTSB report that Google’s Solara 50 drone crashed in May 2015.