Here's why one of Google's sister companies is working on the tech. 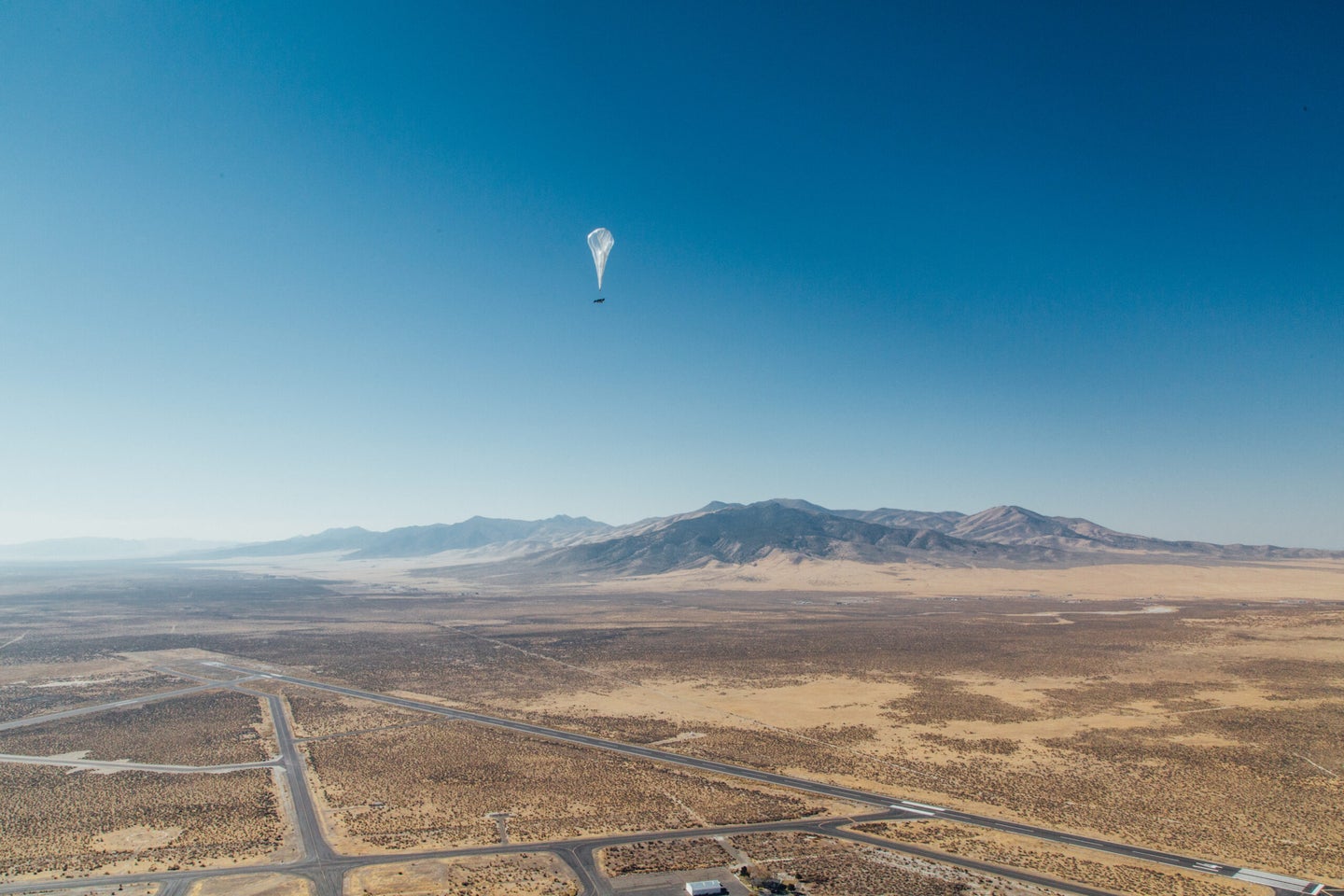 Depending on where you live, it can be pretty easy to take speedy, reliable data connections from cell towers for granted. But not everyone in the world dwells near such infrastructure, of course—or sometimes, after disasters, a cell network becomes crippled.

One of Google’s sister companies, an outfit called Loon, has been working to use balloons floating some 12 miles above the ground to address this problem. These helium-filled vessels take a cell signal from terra firma, and then pass it along from balloon to balloon to get it where it needs to go. Equipment on the bottom of the balloons creates an LTE signal to give people below them a connection—one balloon can cover some 1,930 square miles underneath it.

In fact, Loon just announced they’d sent data between two balloons more than 372 miles over the Atlantic. In another feat, they beamed an internet signal almost 621 miles over Nevada and California, skipping from one balloon to the next in series of zig-zags like Pony Express riders delivering packets of mail.

Here’s how the system works.

The entire system of balloons relies on a direct connection to the internet beamed up from a ground station to a balloon close to it. Then, to pass data from balloon to balloon, each floating vehicle uses two to three antennas that are each roughly basketball-sized and can transmit to each other.

Those antennas are mounted on articulating arms, called gimbals, which use electronic guidance to keep them pointed in the right direction. “The balloons are constantly moving around, so they have to adjust all the time in order to keep a lock,” says Sal Candido, head of engineering at Loon. The antennas can move to make sure the connection isn’t interrupted as the balloons shift in the wind.

The way they’re transmitting data from balloon to balloon via these moving antennas is using millimeter wave signals, which is also one way that cell providers are interested in bringing 5G speeds to the masses.

And while you might think that sending a signal between two balloons some 65,000 feet off the desk takes a great deal of power (the balloons are solar powered), Candido says that biggest issue they have to solve is making sure those antennas line up correctly.

“The primary thing is the accuracy—the power requirements aren’t too difficult in the stratosphere,” Candido says. “These are narrow beam, point-to-point links.” He compares the kind of accuracy you need to have to sinking a basketball through a hoop all the way across a football field.

As for those long transmissions between balloons the company is boating about? The one over California and Nevada involved an actual internet-connected signal that came from the ground, while the 372-mile-one over the Atlantic was just data passed between two balloons without a connection to the web.

Why does it matter?

Loon plans to launch service in Kenya next year with this system, working with Telkom Kenya to deliver the signal from the ground to the balloons. But using balloons represent just one way of bringing an LTE signal to the cell phones of the world.

The general strategy that Loon is using is known as multi-hop system, in which a signal jumps from a base station onwards through routing points like drones or satellites, says Muriel Médard, a professor of electrical engineering and computer science at MIT.

“There’s a whole array of these types of architectures that have been around for a long time, and are still being deployed,” she says. Think of it like adding an extender to your home Wi-Fi system, or a mesh network.

Of course, a wired connection is nice to have when possible, and cell towers, after all, are connected to the grid via physical wires. But running wire is expensive and comes with its own logistical issues, too. “You can’t have the whole world looking like a plate of spaghetti,” she says. So instead of spaghetti, picture floating balloon meatballs.