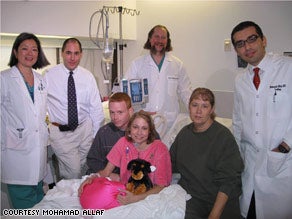 Jennifer Gilbert, center, received a kidney from Kimberly Johnson, at right in green.

Surgery for an organ donor generally involves a lot of pain, long recovery, and scarring. Which is why doctors at Johns Hopkins Medical Center tried a new approach (literally!) last week; they removed a woman’s kidney through her vagina. Strange as it may sound, the procedure is less invasive than traditional methods—and actually not so new.

Nonfunctioning and cancerous kidneys have been removed transvaginally before, and other organs have also been removed through natural orifices but this is a first for a healthy kidney slated for donation. “Removing the kidney through a natural opening should hasten the patient’s recovery and provide a better cosmetic result,” said Dr. Robert Montgomery, the chief of transplant surgery at Johns Hopkins.

Kimberly Johnson, 48, of Baltimore, donated the kidney to her 23-year-old niece. Four days after the surgery, Johnson (a mother of three) said the procedure was less painful than childbirth, and the pain she’s now experiencing is “no worse than getting a tooth pulled.”

Traditional kidney removal involves making several incisions in the abdomen, two to three days in the hospital, plus several weeks of recovery at home. But with this new procedure, only three pea-sized incisions were made in Johnson’s abdomen—one hidden in her belly button—and one larger incision in her vaginal wall. After cutting the kidney free, doctors removed it through her vaginal opening with laparoscopic instruments. The entire procedure took 3 ½ hours, and Johnson was able to go home after a night in the hospital.

Doctors at Johns Hopkins hope this less invasive surgery will attract more donors. According to the United Network for Organ Sharing, more than 78,000 people are currently waiting for kidney transplants in the United States, and the wait can last years.

But there is also some skepticism from the medical community. Dr. Jihad Kaouk, director of laparoscopic and robotic surgery at the Cleveland Clinic, is concerned about how sterile the procedure is. “There is the risk of infection having the kidney passing through a contaminated area and then going to another patient who is immunocompromised,” Kaouk told the Associated Press. “That is the concern we have and we would like to monitor the outcome in that regard”