How It Works: Surgical Snakebot 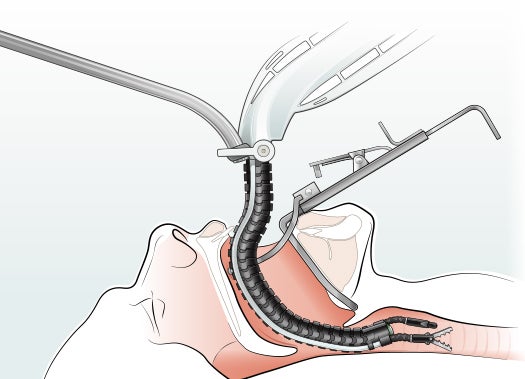 Surgery has always been synony­mous with incisions. But the new snake-inspired Flex System from Medrobotics could reduce bloodshed and hasten healing by traveling through a convenient (if unsettling) alternative: a natural orifice, such as the mouth.

During a Flex procedure, the surgeon stands or sits within arm’s reach of the patient and a video console, and alternates between steering the robot with a joystick and manually operating the instruments threaded through its tip. Since the bot curves and pivots to maneuver around tissue and organs, Medrobotics claims it’s more versatile than laparoscopy, which often requires multiple punctures to insert a camera and tools.

The company is now submitting Flex for approval in the U.S. and Europe for head and neck procedures, such as the removal of throat tumors. But the snakebot’s ultimate destination is the abdomen, via a small incision—or a private orifice. It’s an approach that, while distressing to imagine, could revolutionize surgery.

A surgeon steers the Flex System into the body with a haptic controller, which translates the robot’s contact with tissue into varying degrees of resistance in the joystick.

The snakebot locks in each turn as it pushes forward, its mechanical linkages automatically flexing and straightening to follow anatomical curves of almost 180 degrees.

The robot’s endoscopic “head,” or distal end, features a high-definition video camera ringed by six LEDs (footage appears on a nearby monitor).

The robot has a port on either side of its camera tip, where tools for grasping and cutting tissue can be inserted. They are threaded into the Flex System once it’s in place.