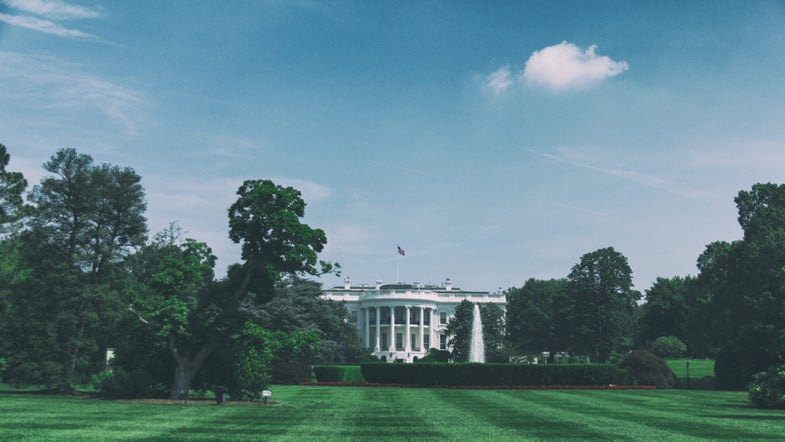 Members of the House of Representative Committee on Science, Space & Technology—including representative Don Beyer (VA), Jacky Rosen (NV), Mark Takano (CA), and a number of other Democrats—have signed and submitted a letter to President Trump expressing concern over the President’s methods of receiving scientific information. The letter states that by failing to appoint a qualified director to the White House Office of Science and Technology Policy or adequately staff the department, the President has left himself vulnerable to “misinformation and fake news,” noting that Trump has, “a tool at your disposal in this regard, should you wish to make use of it, in the Office of Science and Technology Policy (OSTP) which, under your administration, has been left largely unstaffed and without a director.”

Congress created the White House Office of Science and Technology Policy under the National Science and Technology Policy, Organization, and Priorities Act in 1976 with the goal of providing the President and those within the Executive Office quality advice on the creation and modification of policies that directly affect science and technology. The role was first created informally under President Kennedy, whose staff recognized a need for scientific expertise to guide his decision making on issues like the NASA moon mission and evolving medical and military technologies.

“The Trump Administration has been defined by chaos and alternate facts, but it has also consistently shown total disregard for science,” Beyer told Popular Science. “Trump himself famously called climate change a Chinese hoax, so it’s not surprising that he has been repeatedly taken in by false stories that may reinforce his worldview but bear no resemblance to the truth. We are urging him to appoint reliable staff informed by sound science, including a Director of the Office of Science and Technology Policy, so that he can at least give himself better access to accurate information which we hope will lead to better policies.”

The letter is not the first time that the administration has received criticism over its apparent disregard for science and the scientific process. The President’s rumored choice for the role of lead scientist at the United States Department of Agriculture is Sam Clovis, a talk show host with a doctorate degree in public administration—not in a scientific field. Previous undersecretaries have been experts in nutrition or public health, or held degrees in biochemistry or plant physiology.

In addition, earlier this month the EPA dismissed several members of its science advisory board while the Department of the Interior placed its own “under review”. Although members typically serve for two to three years, many of these members were dismissed after having served only one. Statements made by members of the administration suggest that they will be replaced by scientists that are more closely tied to industry, which has many concerned that the board will act in the best interest of corporations and not of the American people.

The actions are alarming enough that on Thursday, 70 members of Congress led by Elise Stefanik (R-NY) and Bill Foster (D-IL) sent a letter to Environmental Protection Agency Administrator Scott Pruitt concerning the recent dismissal of several members of the EPA’s Board of Scientific Counselors. The letter states that, “We are alarmed at the signal this sends about both the priorities of the EPA and about its willingness to protect the environment.”

“There have always been a few industry folks on the science advisory board,” says Granger Morgan. Morgan is the Hamerschlag University Professor of Engineering at Carnegie Mellon University and a former chair of the EPA Science Advisory Board. “The selection criteria have always been to find the people with the very best science. And you need a diversity of science expertise because the agency works across a whole wide range of things, but informally staff has always tried to make sure they balance in other respects as well, with folks in industry.”

Members of the science advisory board include academic scientists as well as researchers for corporations, including Proctor and Gamble and Exxon Mobil. You can get a taste of what these panels are like by reading a transcript.

“No scientific advisory body I know has ever been anti-industry, and I’ve studied quite a number of these bodies over the years,” echoes Sheila Jasanoff a Professor of Science and Technology Studies at Harvard University who literally wrote the book on science advisory panels. “Even in the National Academy of Sciences and the National Research Council, there’s always a balance, and the federal advisory committee act says that there should be a fair balance in terms of the interests represented.”

Science advisory boards were created in recognition of the fact that scientific outcomes aren’t black and white. Scientists can reach a consensus on issues they’ve thoroughly investigated, but the policies that should follow aren’t always cut and dry. A drug with a laundry list of side effects, for example, may be intolerable for treating a cold but perfectly acceptable for treating life threatening diseases. The EPA’s Science Advisory Board, for example, was created by Congress in 1978, after a generation of American wildlife was systematically poisoned by herbicides and pesticides that were supposed to make life better for Americans. Those organochloride pesticides still persist in the environment.

“The [EPA] Science advisory board does basically two things,” says Morgan. “First, it reviews major agency products—if the agency does a piece of analysis for a new regulation or something like that, then the science advisory board is typically asked to look at it and provide commentary on whether they’ve got the science right, whether the analysis was done correctly. It doesn’t make policy prescriptions.”

Science advisory boards tackle the question of, “how do you bridge uncertainty in a complex society where you can’t know everything?” says Jasanoff. “For that you need balance.”

“What we’re seeing right now are things that are pathological and problematic,” she adds. “One is targeting specific individuals, which is always a bit suspect in the science world. And two, a replacement of one type of stakeholder with another, instead of recognizing that it’s the multiplicity of the stakeholders that produces the reliability of the knowledge.”

Without this kind of balanced, outside perspective, misinformation thrives.

The House letter states that “Disseminating stories from dubious sources has been a recurring issue with your administration,” pointing to a May 15, 2017 Politico article which notes that Trump’s “Deputy National Security Advisor passed along printouts of two Time magazine cover stories—one, a previously identified and debunked internet hoax purporting to be from the 1970s warning of a coming ice age, and the other, from 2008, a special report on global warming, with the intention of undermining concern about climate change.”

Of course, the representatives responsible for the letter don’t speak for all members of the committee. In fact, the committee’s official Twitter account often disseminates the sort of anti-science news Beyer and co. are trying to get off of the President’s desk.

We are concerned about the process by which you receive information. According to a story reported by Politico on May 15, 2017, your Deputy National Security Advisor passed along printouts of two Time magazine cover stories – one, a previously identified and debunked internet hoax purporting to be from the 1970s warning of a coming ice age, and the other, from 2008, a special report on global warming, with the intention of undermining concern about climate change.

Disseminating stories from dubious sources has been a recurring issue with your administration. You previously made the false claim that President Obama ordered your phones to be “tapped” based on false reports which have subsequently been contradicted by senior U.S. intelligence officials. You also falsely stated that millions of votes were cast against you “illegally” after reading about subsequently-debunked “research” pushed by alt-right websites. This, by no means, is a comprehensive list of your activities peddling fake news.

Where scientific policy is concerned, the White House should make use of the latest, most broadly-supported science. You have a tool at your disposal in this regard, should you wish to make use of it, in the Office of Science and Technology Policy (OSTP) which, under your administration, has been left largely unstaffed and without a director. If you appoint a qualified OSTP Director, you will have a reliable source of policy advice for matters related to science and technology, which forms the bedrock of our national security and economic power.

Until the OSTP is adequately staffed and the director position filled by a qualified, objective scientist who understands the difference between alternative news peddled on alt-right websites and legitimate well-vetted scientific facts, we fear that you will continue to be vulnerable to misinformation and fake news. Relying on factual technical and scientific data has helped make America the greatest nation in the world. We therefore urge you to quickly appoint a qualified, widely-respected candidate to direct OSTP. Furthermore, it’s critical that anyone you nominate represent the views of the broader scientific community, as was the case for both Presidents Bush and Obama.

This post was updated on May 19th, 2017 to reflect the letter sent by members of Congress to Scott Pruitt at the EPA