Video: Controlling Your Kinect By Waggling Your Tongue

Stick out your tongue and say Aaaahsteroids 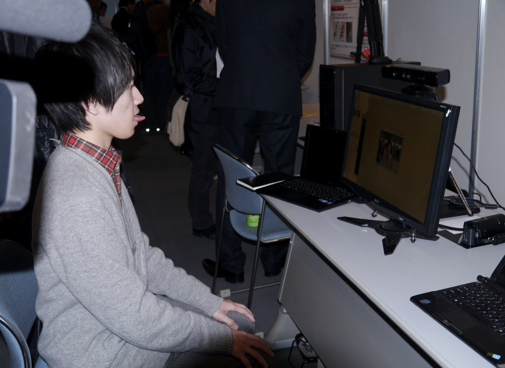 A new Kinect-driven device can follow the creepy, lizardy flicking motion of a person’s tongue moving from side to side, and translate the movement into a video game. The tongue is the gun, as it were, and you can shoot circular objects on the screen like some trippy version of Asteroids. The bullet’s trajectory is determined by the position of the tongue.

Its creators say it’s designed to help people with oral motor function disorders who have trouble speaking or swallowing. They can get a tongue workout this way, and it’s more hygienic than devices that clamp on to test tongue wriggling. It does seem more functional than other bodily-function-aiming video games we’ve seen.

Students at the University of Electro-Communications in Japan developed this device, which is called SITA, wherein the T is represented by a person’s tongue sticking out.

First a Kinect detects the user’s face and eyes, and then it can estimate the position of the nose and the mouth area. Then it can detect the protruding tongue. The team is working on a more advanced prototype with more precise detection, and an added ability to detect movement of the lips, too. Watch the weirdness below, courtesy of DigInfo TV.