Faster than a speeding bullet train 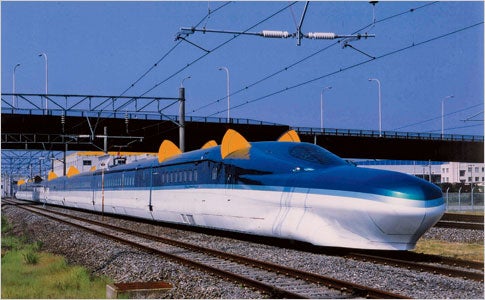 Blowing by the current record-holder-the French TGV, with a maximum operating speed of 186 mph-East Japan Railway´s Fastech 360 train will carry travelers at a top speed of 224 mph and is expected to hit speeds above 250 mph in test runs. This year East Japan Railway began testing a prototype with two uniquely shaped nose cones-at 52 feet, the longest ever-that reduce drag and noisy micropressure waves in tunnels. To stop quickly in an emergency, the Fastech 360 uses cat-ear-like spoiler brakes that pop out of the roof to increase air resistance. The trains will go into service around 2011.