Everything you’ve ever wanted to know about donating bone marrow

From swabbing your cheek to saving a life. 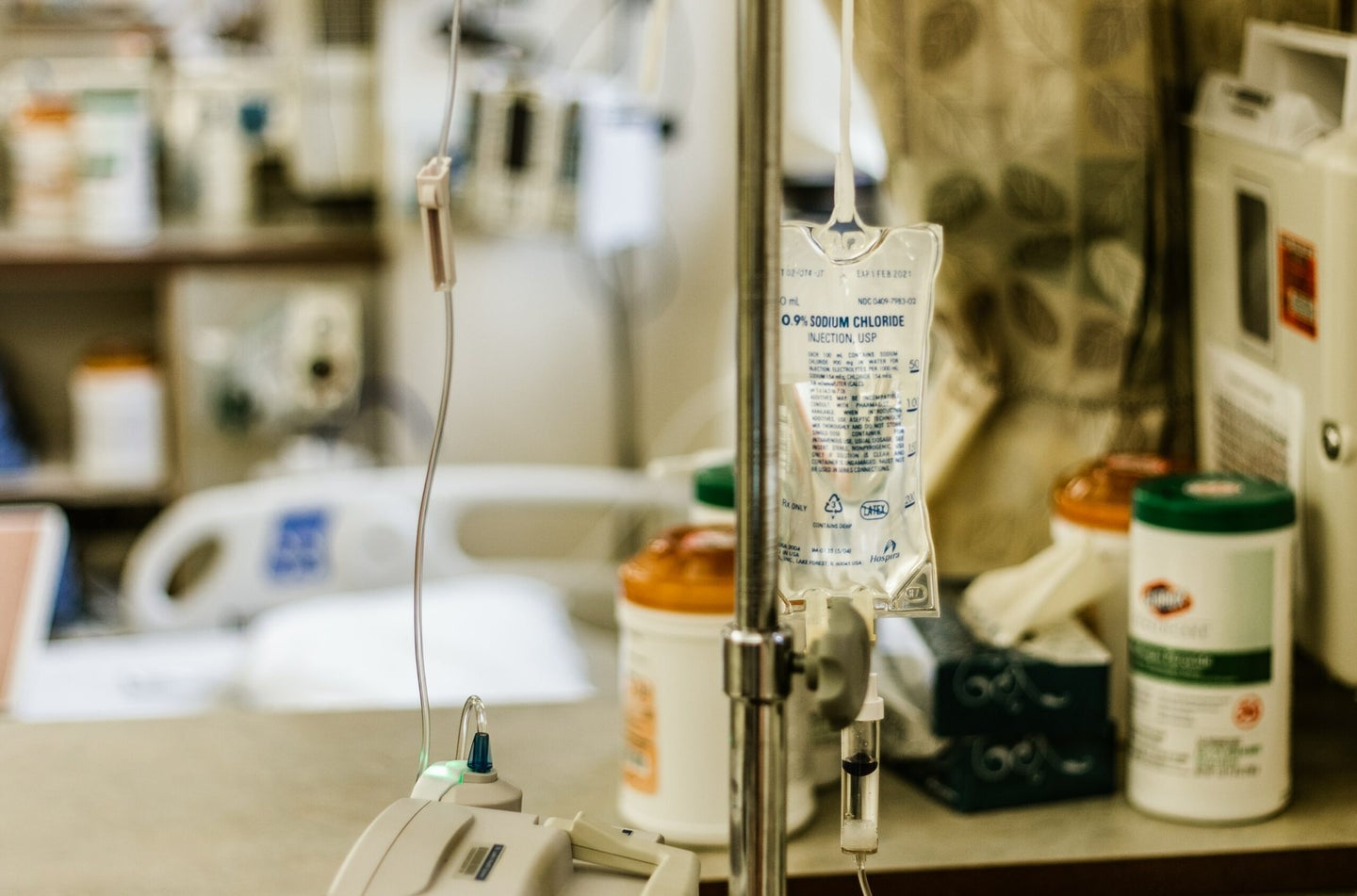 Bone marrow transplants might sound scary, but in some cases, it's just an amped up blood draw. Photo by Allie Smith on Unsplash
SHARE

If you’ve ever given blood or signed up to be an organ donor there’s a chance you might’ve bumped into information about bone marrow donation. The procedure is shockingly simple, and for a lot of people, it’s free. For the folks out there with leukemia, myeloma, lymphoma, or other blood diseases lucky enough to find a match, the transplant is priceless.

And don’t worry—you don’t have to saw your bones open and give away the precious goo inside to save a life. Before you deep dive into figuring out how to donate, it’s essential to know what you’re actually giving.

If you’re curious about what bone marrow looks like, crack open a bone after the next time you polish off some fried chicken. What you’ll see there is a magenta spongy material, the same you can find inside of your own bones and the bones of many living creatures, including mammals, fish, and even snakes.

Ken Cooke, director of the pediatric bone marrow transplantation program at Johns Hopkins Kimmel Cancer Center, calls the substance the “factory where all of the elements of blood and the immune system are generated.” The marrow manufactures red blood cells, white blood cells, platelets and more, which then make their way through a small capillary system and into the blood. There they are distributed to wherever in the body they’re needed.

What doctors look for in the marrow are called blood stem cells, or the “factory workers” in Cooke’s metaphor. These guys not only give rise to all the other kinds of cells in the blood and immune system, but they also replicate themselves over and over so your body’s blood can be continually renewed.

When someone suffers from sickle cell anemia, aplastic anemia or cancer, it’s like all their factory workers went on strike, which makes it pretty difficult for bone marrow to produce the cells your body needs.

For patients to receive bone marrow from a donor, doctors have to find a “perfect match.” To determine that, Cooke says, they look at particular points on a potential donor’s genetic blueprint called human leukocyte antigens. There are twelve points in total—six inherited from the donor’s mother and six from their father. When all twelve points of a patient and a donor are the same, voilá—you have a match.

In those cases, doctors turn to organizations like Be the Match to find potential donors among the nationwide database. This is where you, reader, come in to save the day. If you’re between the ages of 18 and 44, all it takes for you to get in the registry—and potentially saving someone’s life—is answering a quick survey and getting a paid-for mouth swab.

Right now, certain ethnic groups are less represented in the registry than others, making it the perfect time to seriously consider becoming a donor, no matter your background. Ethnicity matters because our DNA is passed down from generation to generation, linking us to people of similar origins even if they aren’t directly related to us. Because people of color are underrepresented in the registry, finding a match for patients of color can be a long shot compared to a white patient.

When—and if—you get the phone call

Becoming a donor is the first step, but actually donating bone marrow is a whole other story. In fact, the likelihood of you ever needing to do something beyond that original swab is quite slim—Be the Match estimates that only around 1 in 430 people on the registry will end up being a donor. But if you do get the call, this is what you need to be prepared for.

Before anything major happens, the potential donor will go through more tests to confirm they really are a perfect match. They’ll also be tested for certain infectious diseases like hepatitis or HIV, which can be deal breakers at the time of donation.

But a big part of getting that phone call is also making sure the donor is willing to go through with the donation, which may involve surgery, or a process similar to a blood draw. Which procedure the donor goes through will depend on what they’re willing to submit themselves to and the type of patient they’re benefiting: adult patients tend to need more bone marrow than pediatric patients.

“It’s so hard to find [perfect matches] that in a way, we will take what we can get as long as you’re a perfect match,” says Amir Steinberg, an oncologist at Mount Sinai, who is a lymphoma survivor himself.

The tried and true method of bone marrow transplant has been around since the 1950s and it’s closer to that gruesome open-bone image that probably popped into your head when you first started reading this story.

The procedure is simple—the donor is put under anesthesia and laid on their stomach. Next, a pair of doctors known as “the harvesters,” use sharp needles to reach into the posterior superior iliac crests on your hip bone, also known as those dimples on either side of your lower back.

The needle makes its way through the bone and the marrow is syringed out. Depending on how dense in stem cells the liquid is and how much the patient needs, donors will be poked between two and four times in a procedure that lasts up to 90 minutes.

There are no more risks to the marrow extracting process than to any basic surgery involving total anesthesia, but there is something about it to keep in mind: it is particularly painful.

“It hurts. It is a very peculiar feeling,” says Ken Cooke from Johns Hopkins, who donated bone marrow while in med school. “There’s no way we would do this without some type of good anesthesia.”

Lauren Mueller says the feeling is similar to that of falling on your tailbone after slipping on ice—still a small price to pay for saving someone’s life.

In the aftermath of the procedure, donors are usually prescribed a good round of painkillers and at least a day or two of rest to handle discomfort. Limping and further pain is also expected, and it can take a few weeks for them to entirely subside.

According to Cooke, these days this procedure is mostly done for pediatric patients because of the decreased likelihood that other blood cells will make it into the patient. Foreign blood cells raise the risk of graft versus host disease, which is when a donor’s T cells spot a patient’s healthy cells as foreign elements and attack them. There’s always a chance this might happen, but the odds drop considerably the more alike are the DNA of the patient and the donor—the more perfect the match, the lower the risk.

But if the idea of someone drilling your bones for marrow gives you the willies, you shouldn’t give up on being a donor just yet. There’s another method that accounts for the majority of procedures that may be a lot less scary.

If your doctor thinks the patient might need more stem cells than your hip bones can offer, you may forgo the old-school approach and go straight to a newer technique. Developed in the 1980s, peripheral blood transplants are pretty much just an amped-up version of blood donation, which makes them much less painful than regular bone marrow extraction.

For a few days, donors are given shots of a protein called granulocyte colony-stimulating factor (GCSF). This acts like a fertilizer for bone marrow, causing more and more blood stem cells to get into the bloodstream.

After a few days of that, a donor essentially has their blood drawn with a particular machine that siphons off those stem blood cells for donation. If the donor has big enough veins, they can place a catheter in their arm, and just watch Netflix and chill while undergoing the procedure. If the veins are too hidden, Steinberg says a catheter is placed into the neck to get the job done—don’t worry, if this happens to you, you’ll be sedated.

One significant advantage to this method is that you can get a lot more stem cells, so if a patient needs more bone marrow than the old-school surgical approach can offer, this is a reliable way to get it, Steinberg says. Not to mention, recovery time could be a few days, not weeks.

However, there is a major drawback. Peripheral blood transplants have a higher chance of the donor’s lymphocytes—the cells in charge of the body’s immune response—getting into the patient’s bloodstream. This poses an increased risk of graft versus host disease, compared to the bone-poking method.

Finding a home for those blood stem cells

So the doctor has your blood stem cells—now what?

The process is actually pretty unexciting, Cooke says. Essentially, an IV of the donor liquid is linked up to the patient’s bloodstream. From then on, the new stem cells will know what to do.

“They just know to go to the bone marrow, they hone in on it,” Steinberg says.

When bone marrow transplantation is part of cancer treatment, patients have to go through some serious rounds of chemotherapy to knock out the old, harmful immune system before the new cells get into the bloodstream, Steinberg adds. This makes room for the new stem cells to rebuild a patient’s defenses. This process is called “engraftment,” and takes two to three weeks.

For anonymity reasons, patients and donors may only meet and build relationships a year or so after all this goes down, creating some of the most heart-warming stories the internet has to offer.

The future of bone marrow transplantation

New developments come out all the time in the field of medicine and now there’s a chance that the entire bone marrow donation process could be flipped on its head.

Scientists at Johns Hopkins University have found a way to make transplants in haploidentical cases, meaning the donor and patient are only half-matched. This could be a lifesaver for people who’ve been long waiting to find a perfect match and have been unable to use alternatives such as cord blood stem cells.

“We are really breaking down the boundaries of donor selection and availability,” Cooke says.

This process is still in its early stages, which means there’s still research to be done before it becomes massively available. In places like Johns Hopkins, researchers have already succeeded at using bone marrow from a parent, sibling or other unrelated half-matched donors, which gives new hope to patients looking for a match everywhere.