The Next Generation of China’s Carrier-Borne Fighter, The Flying Shark, Takes to the Skies 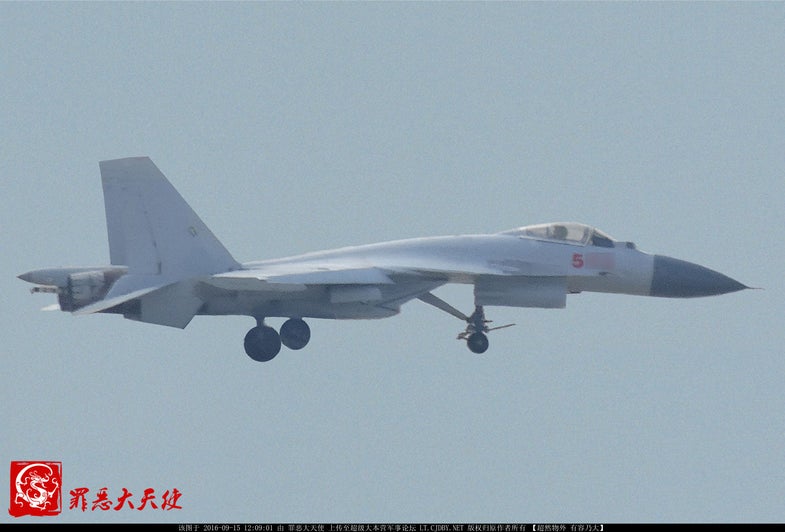 The J-15A prototype, compared to the older J-15, has a list of improvements that include domestic WS-10 engines (seen with silver-colored afterburning nozzles), and a reinforced nosewheel to handle the acceleration from being attached to an aircraft catapult. Chinese Internet
SHARE 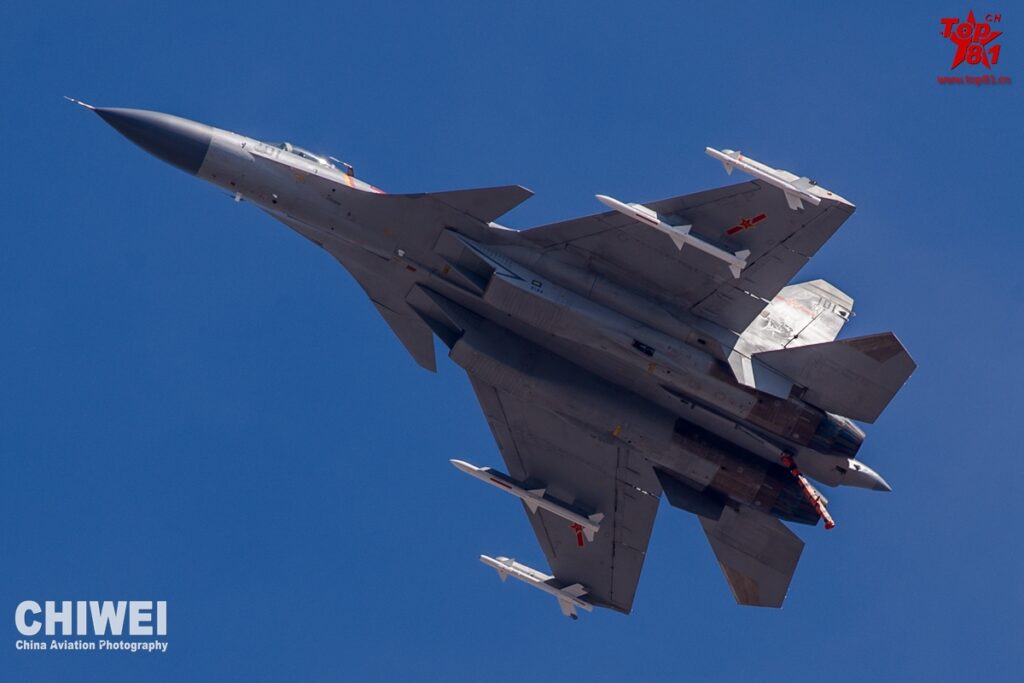 Nicknamed the “Flying Shark”, the J-15 fighter is currently equipped for air superiority missions. But with heavier versions ready to fly off future catapult-equipped Chinese aircraft carriers, the J-15 will blossom into a true long-range multi-role fighter

New imagery shows that the China’s carrier-borne fighter, the J-15, will receive major upgrades, which point to gains in not just China’s engine-making but overall carrier fleet.

The initial J-15s, derived from the Soviet Su-33, had lighter landing gears (see the nosewheel) and Russian-made AL-31 turbofan engines.

The J-15 is derived from the Russian Su-33 (itself developed from the Su-27 fighter), and is currently in limited production by Shenyang Aircraft Corporation. It is used by the People’s Liberation Army Navy (PLAN) on its sole aircraft carrier, the Liaoning. 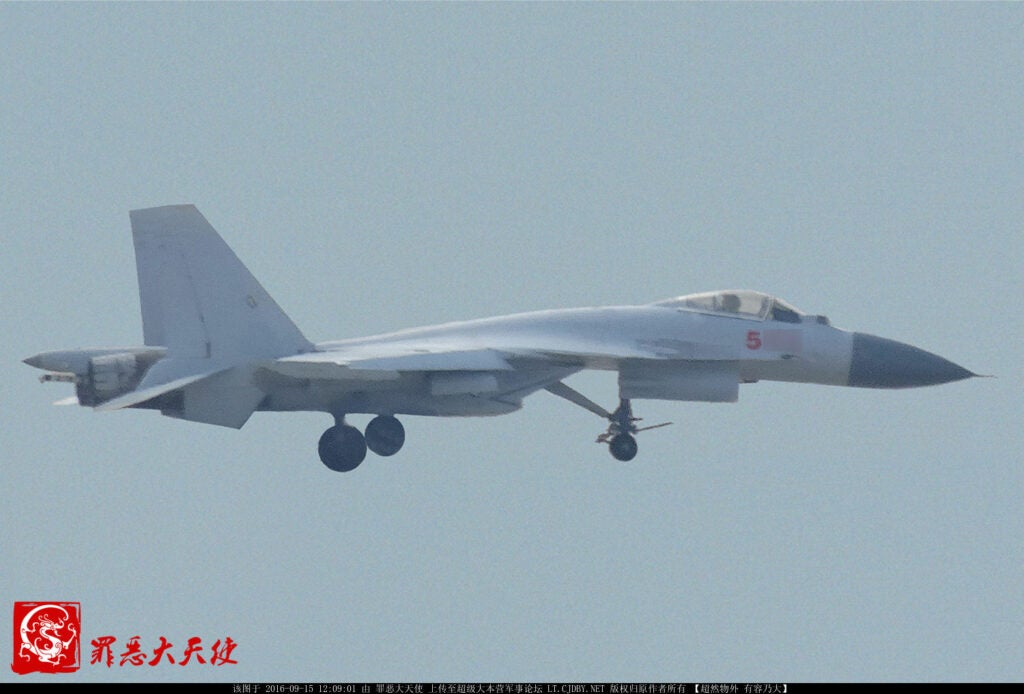 The J-15A prototype, compared to the older J-15, has a list of improvements that include domestic WS-10 engines (seen with silver-colored afterburning nozzles), and a reinforced nosewheel to handle the acceleration from being attached to an aircraft catapult.

In September 2016, images of an upgraded J-15, the “J-15A”, emerged on the Internet, showing significant upgrades to its engines and flight performance. The plane makes use of domestically produced WS-10H turbofan engines, distinguished by a squarish, silver afterburner nozzle. While some J-15 prototypes were fitted with WS-10 turbofan engines, all production J-15s presently operating off the Liaoning aircraft carrier use the Russian AL-31 turbofan (which has a dark-colored afterburner nozzle). If future J-15As use the WS-10H as a power plant, it would indicate a triumph for China’s emerging aviation engine industry, which has long been a weakness. Another likely upgrade is the installation of an Active Electronically Scanned Array (AESA) radar, which has improved resolution, multi-target ability, and resistance to jamming. 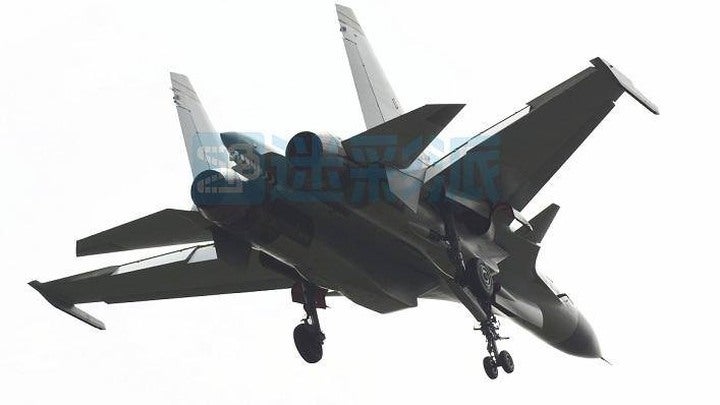 Here, we can get a closer look at the J-15A’s strengthened landing gear, especially the extender on the nosewheel, which is several times thicker compared to the piece on the older, ski ramp-launched J-15s.

However, perhaps the most significant evident upgrade is the reinforced landing gear on theJ-15A’s nosewheel, with the extender in particular much larger. Strengthening the nosewheel is necessary for the plane to operate on carriers with catapults; the catapult’s aircraft launch bar pulls the J-15 by its nosewheel when the carrier catapult accelerates the fighter during takeoff. Also, the holdback bar needs to be attached to the rear of the nosewheel prior to catapult launch, in order to prevent premature movement. 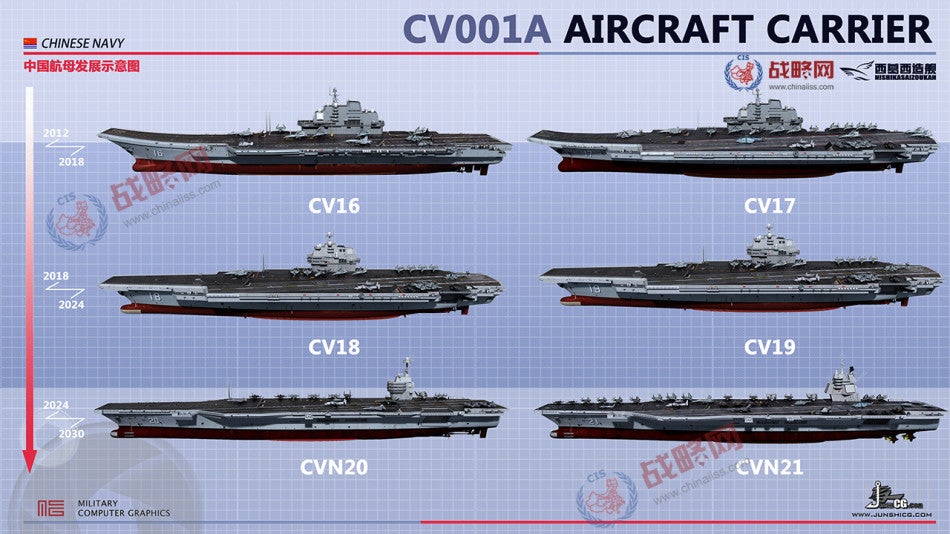 The Future of Chinese Flattops

While neither the Liaoning nor China’s first domestically built aircraft carrier, the CV-17, have catapults, China’s third or fourth aircraft carrier would likely possess them, with the J-15’s new upgrade a further indicator of such plans. A catapult launch capability would be significant. It would give the J-15 additional range and payload, but more importantly, it means the ships could also carry fixed wing Airborne Early Warning and Control (AEWC), cargo/tanker and Anti-Submarine Warfare (ASW) aircraft, which require catapults to launch. Larger AEWC and ASW aircraft, compared to the Liaoning’s current helicopter fleet, would not just increase the combat power of the J-15s, but of the entire Chinese carrier group.

Is this A Model of China’s Next Aircraft Carrier?