Climate change is unraveling the fabric of time. 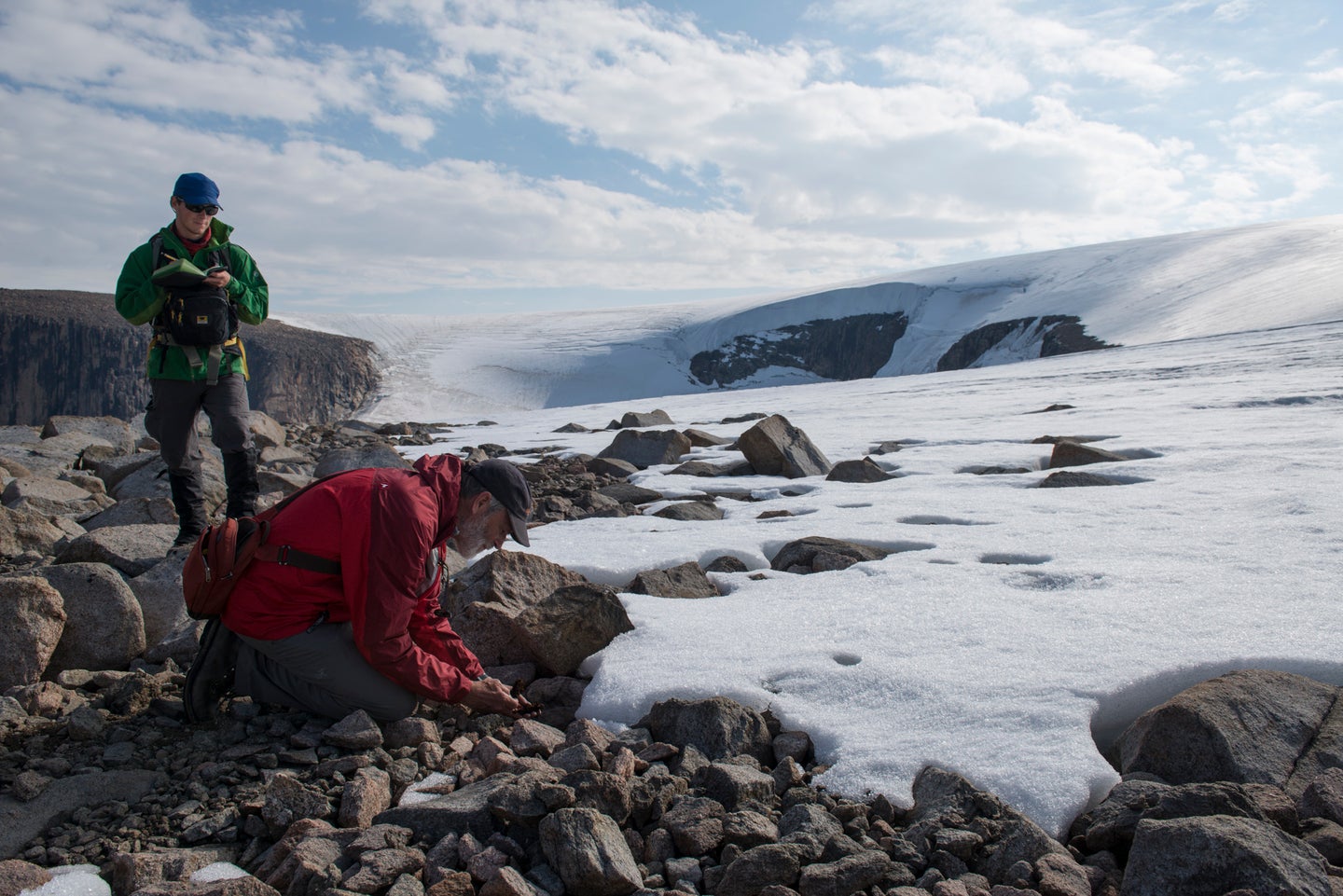 Time is often described as a tapestry—each stitch an event, invention, or individual that propels us into the future. Cosmic patterns mark the formation of the universe up top. Geological forces cinch and bloat the fabric just like they do the oceans and continents. At the bottom sit a few richly-embroidered rows representing human history; highlights include the rise and fall of the Rome and the first 15 seasons of Keeping Up With the Kardashians.

No metaphor is perfect, but this one has an unusual problem: Thanks to just a few centuries of carbon emissions, the “fabric of time” is fast unraveling. Our history, and any certainty we may have felt about the future, is tangled up in it.

In a new study in the journal Nature Communications, geologists working in the Canadian Arctic analyzed the carbon-14 in 48 mosses and lichens collected from rocks on Baffin Island to determine how long they’d been buried in ice. Because plants continuously take in C14 over the course of their lives, the date this C14 uptake stops is like a molecular death certificate—a clear indication of when the organism stopped photosynthesizing.

Simon Pendleton, a Ph.D. student in geology at the University of Colorado Boulder and lead author on the study, says the results suggest these particular lifeforms, which were only recently made visible by melt, had been continuously covered since the last ice age. In other words, the research team was hiking around collecting specimens from a landscape that had been hidden from view for at least 40,000 years.

“No one’s ever seen them, no one’s ever been there, and only now are we exposing them,” Pendleton says of the northern terrain. “If we had gone a different direction [with fossil fuels] 100, 200 years ago, these still might be ice-covered.” But we didn’t go that direction. As the ice recedes, the past is quite literally shooting up into the present. And most of it isn’t as innocent as ancient lichens.

As part of his research, Pendleton reconstructed historic Arctic temperatures to determine when it was last this warm on Baffin Island. To do this, he combined his island-based observations with information gleaned from Greenland’s ice cores, a naturally-occurring repository of ancient climate data. Pendleton concluded that this is the warmest century in the last 1,150 centuries, or 115,000 years.

But Greenland itself is melting, as Elizabeth Kolbert wrote in The New Yorker in 2016. And the history its glaciers contain is flowing out to sea. “At the top of the sheet there’s airy snow, known as firn, that fell last year and the year before and the year before that,” Kolbert wrote. “Buried beneath is snow that fell when Washington crossed the Delaware and, beneath that, snow from when Hannibal crossed the Alps… At the very bottom there’s snow that fell before the beginning of the last ice age, a hundred and fifteen thousand years ago.” While organizations like the National Science Foundation, which operates the Ice Core Facility, have already stored countless samples from glaciers around the world, each vaporized layer is information lost.

Ice retreat has also exposed archaeological riches—and biological terrors. In September 1991, in the Alpine mountains between Austria and Italy, hikers discovered a mummified human half exposed, half frozen in ice. Now known as Ötzi the Iceman, the Bronze Age individual lived and died some 5,300 years ago. His impeccably preserved stomach has yielded insight into ancient diets. Even his shoes, which look like bird’s nests and are the size of dinner plates, have been intensely studied.

At the same time, though, scientists are concerned that melting ice could revive ancient diseases. In 2015, a study in PNAS found that a 30,000 year old virus Mollivirus sibericum could infect modern amoeba. “If we are not careful, and we industrialize these areas without putting safeguards in place, we run the risk of one day waking up viruses such as smallpox that we thought were eradicated,” Jean-Michel Claverie, one of the study’s authors, told AFP at the time.

Ice cover on Earth has always expanded and receded, expanded and receded, and expanded and receded yet again. But climate change is different: it’s all flow and no ebb. The result isn’t just a melting history—evaporating records of our planetary past—but a deluge of new challenges in the form of drought, disruption, and disease. Time may once have looked like a carefully-woven tapestry. But lately it’s more like Salvador Dalí’s painted clocks: distorted and scorched.