Why Race Horses Are Dying

A fallen horse in last week's Derby raises many questions about the state of racing, but provides few answers 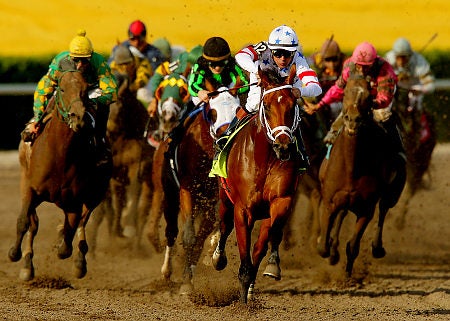 A horse was euthanized this past weekend on the hallowed track of the Kentucky Derby. Eight Belles ran the race of her life, finishing second. But, just steps past the finish line the filly snapped both her ankles and crumbled to the dirt. Veterinarians on site promptly decided to euthanize the horse–on the racetrack–with just a few trucks and an appropriately placed oversized derby hat shielding the more than 150,000 spectators (NBC wisely did not show footage of the horse).

It was the first such incidence at Churchill Downs, but, the fifth horse put down during, or after, the past 13 Triple Crown races. As a result, the second most watched Derby in history is garnering more attention than the “fastest two minutes,” it advertises. PETA is barking for a suspension of the jockey, claiming it rode and whipped the horse too hard. More moderate voices are pondering if it’s bad luck or an emerging dilemma. The potential source of “why” is focused on three questions based in science: 1. Has breeding for speed yielded a more vulnerable horse? 2. Are artificial tracks safer and should they be mandatory? 3. Is the prevalence of medication masking otherwise fragile horses?

Horses are bred (and in some cases, inbred) to maximize specific traits deemed profitable. In racing sports, speed is prized over durability. The small genetic pool is dwindling and weaknesses are becoming apparent. Most agree this has created a more brittle horse, but few have a potential solution or remedy. Horses are built to win, and speed wins. Compelling a breeder to consciously sacrifice speed in the breeding process is the ultimate long shot.

Synthetic tracks claim to be a safer surface than traditional dirt. Installed at a handful of tracks across the country, the data is hardly overwhelming. A report presented in March at the Welfare and Safety of the Race Horse Summit showed there were 1.96 deaths per 1000 horse starts on dirt and 1.95 per 1000 when racing on synthetic–nowhere close to significant. The same study did show that injuries were reduced from 1 per 136 starts to 1 per 215. Conceding that synthetic courses are incrementally safer, it’s an expensive band-aid that can’t be applied at lower end tracks where often the weakest horses are racing.

The more intriguing and divisive issue surrounds medication. The entire sports landscape is engulfed in the performance-enhancing debacle and horse racing is no exception. From anti-inflammatory drugs, to pain relievers, to steroids, drugs are administered–often legally–to just about every racehorse in America. While increased performance raises competitive balance issues, the ability of the drugs to mask pain that puts injured horses on the track gives legitimacy to PETA’s cries of animal cruelty.

There are 38 racing jurisdictions in America and no standardized drug testing or legality. In 2002, the Racing Medication and Testing Consortium was created to address the issue. Six years later, they merely have blueprints and no consensus. Even if the Consortium creates a standard, it will likely allow specific steroids and provide little regulation for pain medication and anti-inflammatory drugs. The industry should take its cue from the thriving race business in Hong Kong which demands a zero tolerance enforced through both pre and post race testing. Horse racing has punished trainers previously for drug offenses (including Rick Dutrow, who ironically trained this year’s winner Big Brown), but if a horse kills itself during a race, how can the punishment possibly fit the crime?

Humans choosing to play through the pain are revered as courageous. Humans masking the pain of a defenseless horse would more appropriately be branded cowards.