This lonely human skull might belong to an ancient tsunami victim

The 6,000-year-old remains are still rather mysterious. 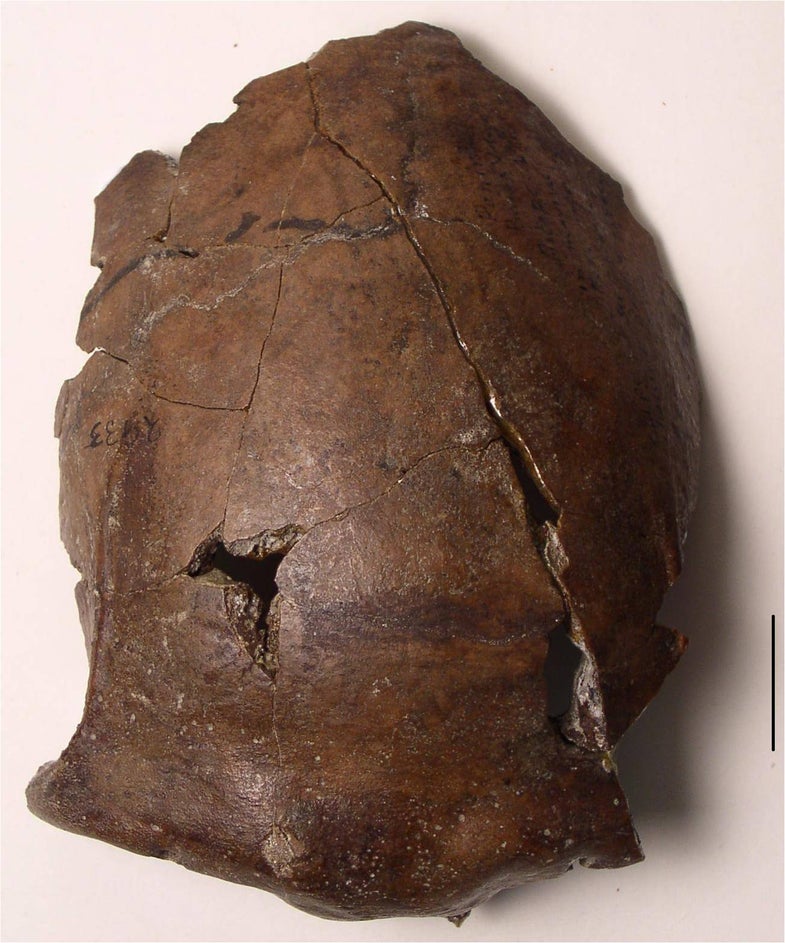 It was hard to be a coast during the last ice age. Sea levels were all over the place—pushing around sediments, drowning beaches, and generally being unpredictable. Finally, around 7,000 years ago, sea levels started to stabilize, and seashores everywhere started to rebuild.

In Papua New Guinea, lush lagoons and coastal flats began to form, and people started to venture into the new areas. But with the new ecosystems—and food sources—also came new dangers, which weren’t present at higher elevations. One of those dangers struck 6,000 years ago, when a powerful tsunami slammed into the Papua New Guinea coast. The marine waters carried tiny shelled creatures called diatoms, pebbles, sand, and at least one human skull.

A new paper published this week in PLOS ONE uncovered evidence that the skull had moved to its resting place via a tsunami 6,000 years ago. The skull lay there for thousands of years, while tectonic forces pushed the land up by tens of meters and a creek sliced down through the sediments.

Along came Paul Hossfeld, an Australian geologist surveying the region for oil and gas resources, who used his time off to do some geological mapping of Paniri Creek in 1929. Amidst the rocks and dirt, suddenly, there was a skull.

“He was really interested in the local geology. He basically had a day off and went and looked in this section because he thought there might be interesting geological strata there, and happened to find the skull, which seems like one of the all time dumb luck discoveries of science,” laughs study author Mark Golitko.

The skull caused a sensation at the time. Hossfeld thought it might have belonged to a member of Homo erectus, an early human that lived hundreds of thousands of years ago. Testing in the 1960’s dated it to much later, around 6,000 years ago, and analysis at the time suggested it might have belonged to a 45 year old woman, though without any other remains, the person’s age and other distinguishing characteristics remain murky.

But for all its enigma, the skull is only one of two early human remains found on the island dating back so far. It came under renewed scrutiny after a 1998 tsunami crashed into the coast, bringing researcher’s attention back to the skull. Was it possible that a similar cataclysm had dragged these remains nearly nine miles inland from the freshly-settled coast?

In 2014, Golitko revisited the site of Hossfeld’s discovery as he was doing fieldwork in the area, looking for evidence of how humans responded to coastal changes. Samples of soil and rocks from the area, along with new maps and analysis showed that the skull had, in fact, been found a layer of sand, rocks, and debris that was dragged inland from the sea—a tsunami.

The authors think that this person might be the earliest known tsunami victim, though proving cause of death is difficult when you only have a fragment of a skull as evidence. It will be next to impossible to link the remains to one specific tsunami event, and without more pieces of the body, hard to definitively say if it was the tsunami that killed them.

Hossfeld didn’t find other remains at the site, but tearing apart bodies is absolutely something that tsunamis are capable of, as people found out during the 1998 tsunami that hit Papua New Guinea.

In a particularly brutal passage from the paper, the researchers explain how this person might have lost their head:

Dismemberment, blunt force trauma, sandblasting, drowning and crocodiles? It’s incredible that any remains would stick around at all.

There’s no reason to assume that tsunamis 6,000 years ago worked differently than tsunamis today, and Golitko and colleagues think it’s the most plausible way that the skull ended up entrained in the tsunami sediments. But this person could also have died from some other malady, and then had their peaceful rest disturbed by a wall of water. The authors say that while it’s unlikely a grave would have been excavated by a tsunami, different mortuary practices—including dismembering bodies after death and placing their bones in special resting places—might have been more easily disturbed.

“I’m not sure there’s a smoking gun that would tell you definitively that this individual was killed by a tsunami,” Golitko says. “But whether they were killed by the tsunami or died shortly before the tsunami and were redeposited, the skull shows that someone was living there who would have been impacted by the event.”

Future research could help show how ancient groups of people in the region coped with the less-than-rejuvenating aspects of coastal living; flooding, storms, and yes, even tsunamis.