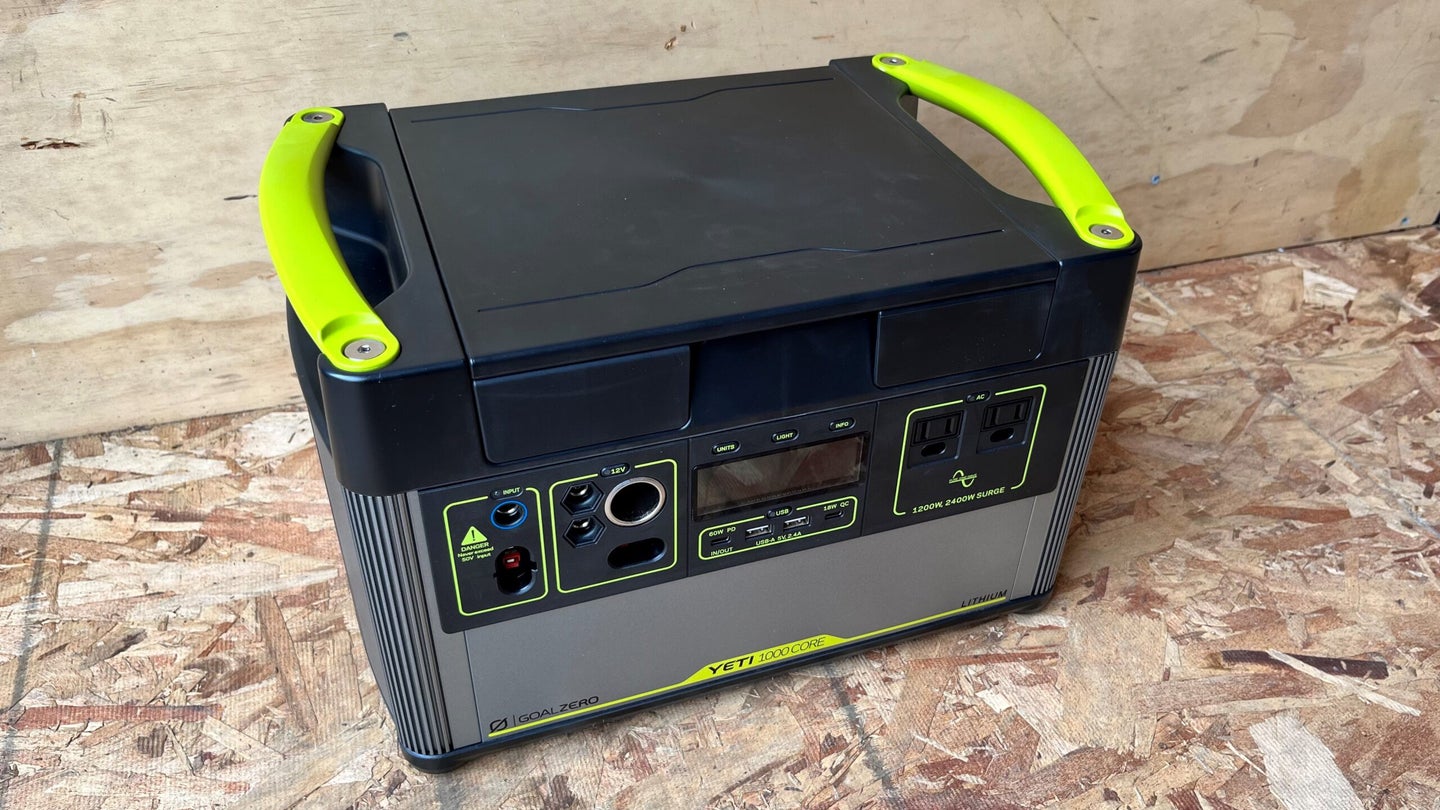 The Goal Zero Yeti 1000 Core comes very close to being a perfect portable solar generator. It’s highly reliable, durable, and mobile, making it a great fit for camping and road trips. Its excellent base elements, however, are somewhat hampered by a frustratingly slow charging speed, which is why we prefer Yeti’s fast-charge-capable (but pricier) 1000X. But if speed isn’t your priority, the Yeti 1000 Core is hard to beat for substantial battery capacity in an easy-to-transport package.

Capable of charging via wall outlets or optional solar panels, the Goal Zero Yeti 1000 Core is a dynamic solar generator. It offers an admirable 983 watt-hour capacity in a comparatively lightweight 31.68-pound package. While it’s theoretically capable of stepping in for any mobile or emergency power need, I think its capacity and size make it a good fit for camping or road tripping.

The Yeti 1000 Core boasts seven output port options, including two 120V AC wall-style outlets, a 12V car plug-style outlet, two USB-A ports, and two 60W fast-charging USB-C ports. Its 10A output is capable of delivering 1200W of consistent electrical output and can surge as high as 2400W (for comparison, that faster-charging, $400 more expensive Yeti 1000X gets you 12.5A output of 1500W, 3000W surge, plus a chainable feature). Charging is easy (with simultaneous recharge/discharge): Simply plug the 1000 Core in, plug in your device, and press a single button to let the power flow. It’s about as self-explanatory as it gets.

Storing 983 watt-hours in a full charge, it isn’t the largest capacity in its class but it holds an impressive amount of juice for its weight and dimensions. To put things into perspective, you should have enough juice to charge a smartphone 82 times, a laptop 20 times, or keep a portable fridge for 40 hours. For most people, that’s plenty for a camping trip over a long weekend. It also runs quiet, which is especially nice when you’re sleeping next to it in a van.

The Goal Zero Yeti 1000 Core stands out from the pack thanks to its sturdy, smart design. Like other Yeti generators, the 1000 Core is built to handle a few bumps and bruises. I tend to be rather hard on my gear, so I can attest to the fact that it is more than durable enough to handle the rigors of camping or van travel.

I’ve also really come to appreciate its perfectly rectangular shape, which makes it easy to store or install in a van conversion. Many portable power stations have handles that stick out and make them awkward to pack but the Yeti has handholds set within the frame, so it’s easy to stack or cram into a small corner. Its cables are also stowed in a storage area at the top, which helps keep things organized. It’s no fun to waste time digging around in all your stuff looking for cables or adapters.

For all its fine points, the 1000 Core has a serious flaw: This generator takes a long time to recharge. When plugged into a wall, it takes nine hours to charge at its standard input rate of 120W. That’s pretty slow, though if you want to invest more in your purchase a 240W charger, sold separately, cuts the time to 4.5 hours. The 1000 Core’s solar recharging time is similarly gradual, easily requiring a full day of sunlight unless you’re willing to come at the problem with a more expansive (and expensive) set of solar panels.

The 1000 Core only has a single solar input, so low-wattage solar panels like a solo 100-watt will crawl the power in. Stepping up to a 300-watt panel (which takes advantage of the 1000 Core’s full 300W input capacity) will speed up the charge time to about four hours, which is more or less in line with its competition, but that certainly won’t come cheap. Goal Zero’s 300W Ranger Briefcase, for example, clocks in at $800, while the cheapest off-brand options still tend to have a hefty price tag. In other words, the 1000 Core could benefit from the addition of a second solar input, which would allow you to use a pair of more-affordable, lower-wattage panels.

The Goal Zero Yeti 1000 Core is a perfect portable power station for camping or taking on the road in an RV or converted van. It stores enough power to keep most portable tech going for 2-3 days. It’s durable and portable enough to easily pack and unpack from a car. It will, however, require you to plan out charging if you’re camping or traveling for more than a few days.

The 1000 Core also can be used as a light emergency backup power source at home but you may be better off going for one of the Goal Zero’s bigger, less portable generators.

The Goal Zero Yeti 1000 Core is an imperfect tool but a useful one nonetheless. If you need an easily storable generator for short camping trips that can take plenty of abuse, it will make a good companion on the road.