Choose the right sound for your bike

Hear some of the best-rated bells, and then buy one for yourself. 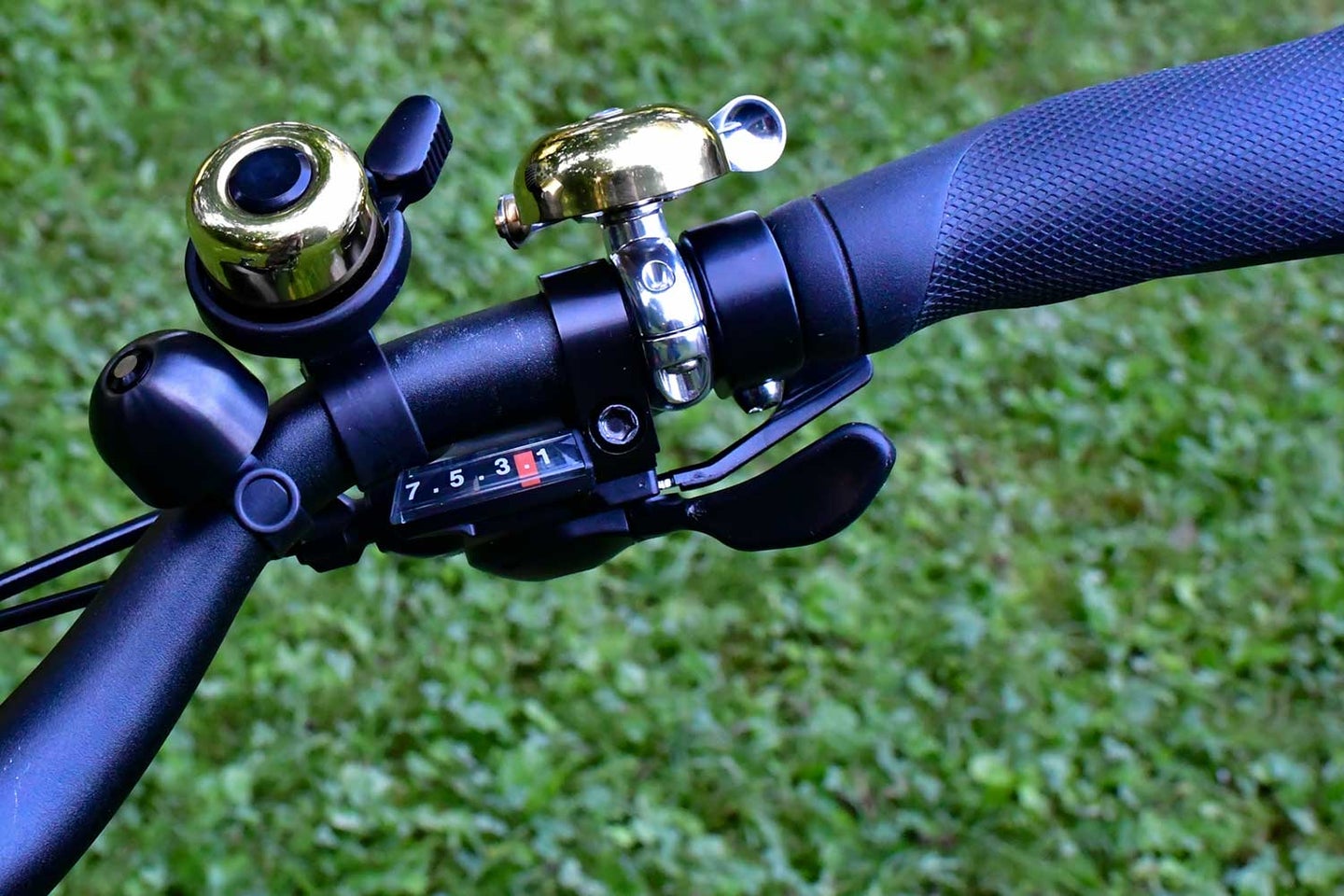 Ring-a-ding-ding: Click the links below to hear (from left) the Spurcycle Compact Bell, Incredibell Brass Duet, and Linus Sidestricker, among other bells. Michael Frank
SHARE

Like a lot of journalism, this guide was born of necessity. I needed a better bell. I’ve been ebiking a lot on a newly developed path in my town that makes it far easier and safer to head in for shopping and other errands, but during COVID-19 this cordoned pedestrian avenue has become a rush-hour interstate, a stand-in for an aerobics studio, a paved two-lane gym, and a social oasis for cooped-up dogs (and their masters).

I’m happy that my neighbors are finally getting out and riding, trust me. But alerting them to my existence, particularly when I’m moving under electric boost and moving faster than the bulk of “traffic” has been a challenge. Shouting “On your left!” while wearing a mask is semi-useless. Actually, it’s always been useless, mask or not. People just don’t know what to do and scurry everywhere. You know this. You’ve lived this. A bell doesn’t exactly direct traffic, but somehow people figure it out and clear a wake more easily.

So it was time for a decent bell—better than the tin-toned thumb-striker I’d dug out of a drawer and realized simply didn’t ping with nearly the decibel reach I would need. But when I went online to find bell reviews, not one actually included recordings. How the heck could I decide if I didn’t know what a bell actually sounded like? Also, what about sizes? It’s one thing to list measurements, but I really wanted to see bells stacked up. Because handlebar real estate is precious, and understanding that would help me decide what might fit.

So that’s what’s here: audio recordings in stereo, images, words, and a few group shots, too, so you can eyeball relative sizes.

PDW makes some very nice accessories, and the AGB is no different. It’s a large, very sturdy brass bell that replaces one of your bike’s headset spacers (the rings that sit below the stem). As such, it works just fine on either a drop-bar or flat-bar bike, but do know that you’ll have to take your hand off the bike’s grip to operate it.

Design: The super-sturdy mounting structure of the AGB is clearly an advantage. Plus you’re clamping down onto it using the stem bolt, making that base rock solid. If you think about it, bells get their sound by vibrating, so they’ll lose some of their sonic punch if their song is sponged up by a flimsy fixture. That’s no problem here. The extra-large thumb lever is also easy to actuate, so even an uncoordinated stab isn’t really an issue.

Sound: I tested this bell riding past my wife on our street. Not only did she think the AGB was clearly loud, she (and I) judged it the clearest and prettiest of this bunch. The pitch is a little lower, but still very strong. On the path it gets attention from a distance, and at times one ding was enough, with a looooong resonance after a single ping.

Of all the bells here, this model from Mirrycle is the most affordable, and the sprung release double-rings the bell, so you’re sort of getting a double dose of alerting folks with each trigger pull.

Design: One limitation of the Brass Duet is that you can’t mount it on a bar with a diameter greater than 24 millimeters. Besides the Spurcycle, no other bell that made our list is as small, so as long as it’ll clamp to your bar, you’ll find a spot for it. Once mounted, it’s easiest to strike by just reaching an index finger to give the spring a quick flick.

Sound: You’ll get grins from people on the path with this bell. It’s loud enough, and sounds fun to most ears. People think there’s a kid coming down the line. You’re expecting someone on a beach cruiser—or perhaps Pee-wee Herman.

The Oi offers an entirely different design from other bells, but its shape also makes it a far better chime for a flat-bar bike, where it can fit butted right up to either grip. On a drop-bar bike it’s more of a problem, since you have no choice but to mount it adjacent to the stem. And at 48 millimeters it’s pretty wide, it’s about double the width of other clamps that mount to your bike’s bar.

Design: The circular shape was meant to mirror a ring you’d put on your finger, according to Chris Bilanenko, Knog’s senior industrial designer. The thumb actuation is very easy to trigger with your hand still on the grip. In the shot we actually strapped it to the grip itself, which mutes the sound too much. The Oi is the most sensitive to where you position it; the underside of the clamp is designed to gather cables and get these out of the way, but that’s not always feasible and we found that if a cable is resting on the top arc of the structure, that will silence the Oi, given that it literally vibrates when you strike it.

Sound: Which came first, the Oi or the “You just got a new text!” ping from your smartphone? We ask, because the Oi literally sounds like that signature electronic ping we all know and react to. It’s louder than your smartphone, and the resonance is very long and pleasant, but time and again I’d have to hammer the Knog more than just a few times as people first reached for their pockets, thinking they’d been texted. They got over that mistake as I got closer and they realized what was going on.

PS: Knog’s PR guy, Colin Brown, helped us with the translation from Australian, since Knog is an Aussie company. Brown said, “It’s oi! as in ‘Oi, mate! You’re in the way!’ “

True confession: We really like Spurcycle bells. They’re small, and the super-elegant original fits bars up to a 31.8-millimeter clamp diameter. This Compact model is $10 cheaper, but will only fit up to a 22.2-mil bar.

Design: This is a simple thumb-trigger bell. It’s meant to take up zero space on a bar, or just about that little, and is ideally placed just inboard of a flat-bar grip. The Compact model straps to the bar with a plastic fastener rather than the metal band of the original, so it’s possibly less durable.

Sound: Spurcycle bells are a favorite of roadies and mountain bikers because they’re loud. What I didn’t realize until this shootout is that that might be a matter of perception, because mostly what you learn is they ding at a very high register. That can “ring” a few ways. People certainly hear it, and bolt for the shoulder of the path or trail, but it can also hit folks as slightly harsh. There is an advantage, however: You will be heard. And right up there with the PDW, frequently one ding is all you need.

A lot like the Incredibell, this is an affordable design, but do be aware it’s pretty big, and the actuation would make it tough to add to a drop-bar bike, since ideally you want to fire the release with a flick of your index finger. Also, this bell won’t fit on a more common, fatter road-bike-style bar. Maximum diameter is 24 millimeters.

Design: The Linus is as old-school as the PDW, if not quite as oversized. It has a very meaty spring that, when pulled, feels like you’re about to release a catapult and hurl a projectile down the road. There’s zero question about the build quality. I’d wager there’s as much metal in this one bell as Spurcycle would use to make 10. I’m pretty sure the Linus is one of those heirlooms you can pass down to your grandkids.

Sound: Unleash the Linus and its ring just keeps resonating. It’s the Energizer Bunny of bells. The ding is higher-pitched than the PDW, but both are very, very clear, though it’s possible the Linus is borderline eardrum-piercing. Do you care? Maybe the Oi is translated to “Hey!” from this American brand. Still, we actually really like the sound of the Linus. And like the Spurcycle and the PDW, usually one ding was enough to clear a path.