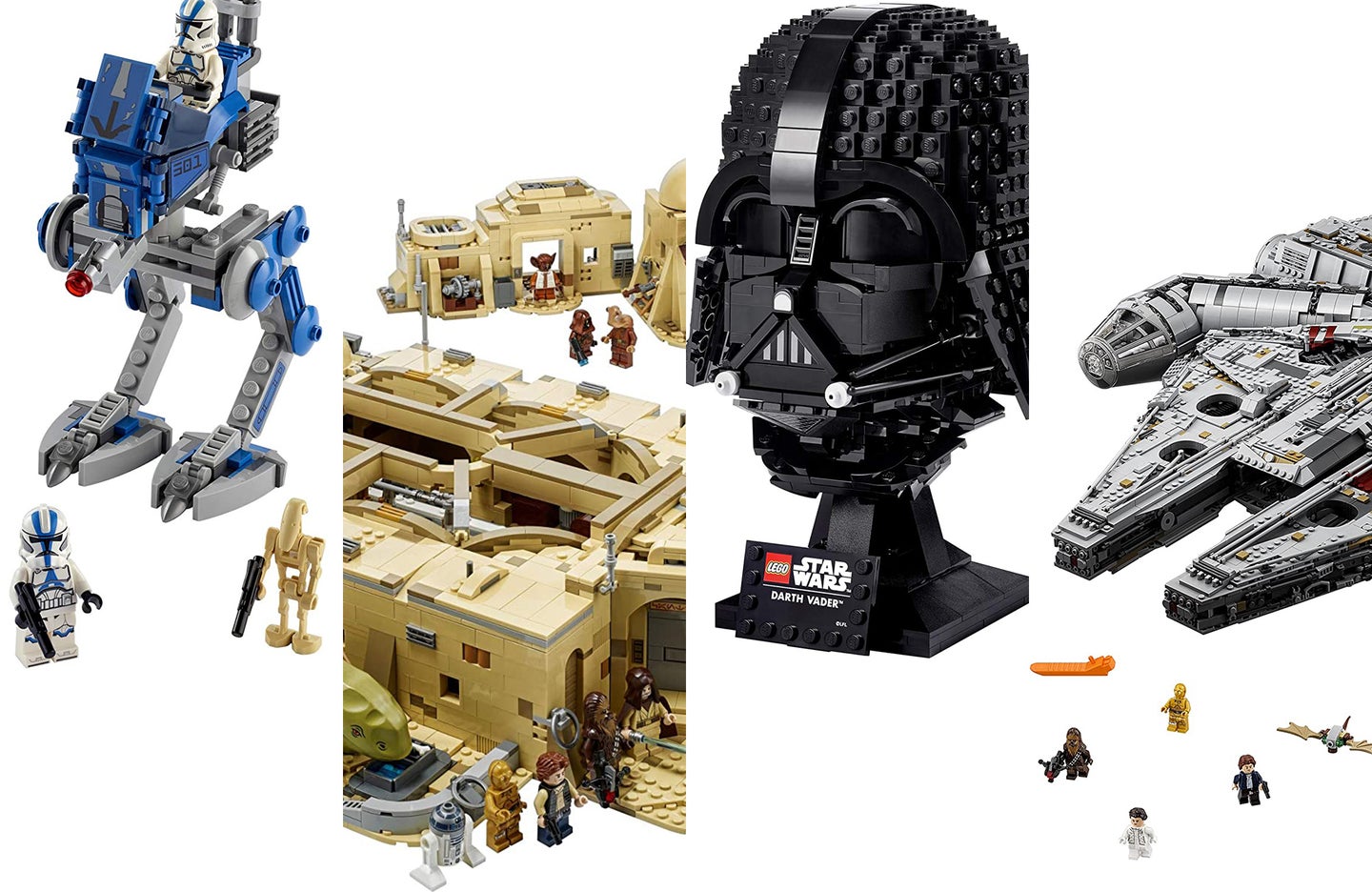 Build your own Star Wars adventure.

Believe it or not, Lego didn’t get into the Star Wars business until 1999, creating a series of models based on Star Wars: Episode 1 – The Phantom Menace. Since then, everyone’s favorite building toy company has created over 800 sets based on the films, TV shows, and every other corner of the Star Wars universe, including The Clone Wars, The Empire Strikes Back, and The Mandalorian. Building the best Lego Star Wars sets may make you feel a little bit closer to that galaxy far, far away, or help inspire you to think up a new one of your own.

How we chose the best Lego Star Wars sets

I had a bucket of mixed Lego pieces that was passed down to me when I was young and I’ve never stopped building. As an editor at TechnoBuffalo, I covered Lego and Toy Fair, an annual toy industry convention, many times. I also grew up watching Star Wars on LaserDisc, which tells you how far back my fandom goes. Over the last 10 years, my byline has appeared on Gear Patrol, CNN Underscored, and Popular Science, where I’ve written about everything from the best kids water bottles to the best 4K TVs.

Since we’re talking about a specific subset of toys from a single company, picking your next Lego Star Wars set isn’t really about finding something good or bad, but about picking something that’s going to capture your interest and imagination.

There’s enough variation in size, complexity, and price that you should keep in mind what you’re looking for right now, in the moment. Some sets are straightforward and made to be put together in one quick session. Others are much larger, more intricate projects that might take a few days or longer. And, of course, you’ll want to pick something you think is cool and that resonates with the specific parts of Star Wars you connect with most.

Lego sets have become much more expansive and intricate over the years. These days, the biggest sets often contain several hundred or even thousands of pieces. The number of pieces in a given set should give you a rough sense of much time it will take to build and how complex the process will be. Don’t buy the 7,541-piece Millenium Falcon if you don’t want to spend a week or more focused on the project.

With larger sets, we also recommend coming up with a plan for storing the pieces before you start, so you don’t lose any or, worse, wind up stepping on a piece that fell on the floor.

While Lego is appropriate for any age, the varying scale and complexity of the sets may make more sense for some people than others. Lego includes age recommendations on each box and provides helpful information for parents picking sets for kids on its website.

We picked Lego Star Wars sets that appeal to a wide range of age groups. If you’re picking a Lego set for a child, consider whether they have the patience and experience to complete it.

The core purpose of Lego, generally, is to inspire creativity and encourage play. That said, the company increasingly makes sets aimed at adults that are meant to be put on a shelf and displayed, rather than treated as a toy. For example, this collection of replica helmets.

Many of the made-for-display sets feature some kind of special designation, such as the “Master Builder” or “Ultimate Collector” series. You can also tell by looking at the piece count: The extremely large sets with detailed designs are often made for display. In some instances, Lego will offer multiple versions of the same set—one that’s more for play and another for hobbyists.

Lego Star Wars sets range dramatically in price, from as little as $10 up to $800. In general, larger sets containing more pieces are more expensive. There’s also a substantial price jump when you start looking at very detailed sets for hobbyist Lego fans and collectors.

We tried to highlight options that run the gamut in price, from the exorbitant to the affordable. Lego should be accessible to everyone, and the prices should reflect that.

In picking our favorite Lego Star Wars sets, we strike a good balance between affordable and expensive sets, options for kids and sets for adults, leisurely builds for weekdays after school, and serious projects. We also considered the importance of the characters, scenes, and vehicles that are represented. Have you always had a soft spot for the Millennium Falcon? Do you need a Mando minifig? If so, these are the Lego Star Wars sets you are looking for.

Why it made the cut: The Mos Eisley Cantina set recreates the iconic location with excellent attention to detail.

The Mos Eisley Cantina set captures one of the most beloved Star Wars locations in 3,187 pieces. The model recreates both the interior and exterior of the Cantina, with a U-shaped bar, the Cantina band, and plenty of unsavory characters. Fans can also relive the moment Han Solo and Greedo meet for the last time and decide once and for all who shot first.

The Mos Eisley Cantina set comes with 21 minifigures—including Luke Skywalker, C-3PO, and Chewbacca—allowing players to stage different scenarios in the Star Wars underworld. If you’re looking for a smuggler, you’ve come to the right place.

If you don’t have time for a 3,000+ piece build, there’s also a much smaller, more affordable Cantina set focused on Han and Greedo’s bar booth showdown.

Why it made the cut: The Millennium Falcon is one of the most intricately detailed Lego sets ever created.

Featuring 7,541 pieces, the Millennium Falcon is one of the most intricately detailed designs in Lego’s entire history. Every satellite, interior space, and laser cannon is brought to life in stunning detail, and the set comes with multiple crew members so that you can relive the original and newest trilogies. It even comes with two buildable Porgs, which look just as adorable in Lego form as they did in the movies.

As much as we love the ultra-detailed look of the Ultimate Collector Series version of the Millennium Falcon, it’s an incredibly expensive set. Luckily, Lego also makes a really nice Millennium Falcon set with fewer pieces and a less intimidating price.

This is The Way

Why it made the cut: The Razor Crest set features a wonderful design, endless interactivity, and an adorable baby Yoda minifigure.

The Mandalorian, the newest sensation in the Star Wars universe, comes to Lego in a substantial Razor Crest ship set. It features 1,023 pieces that, when assembled, reveal a fierce starship that includes spring-loaded shooters, a cargo hold, and a detachable escape pod. In addition, the set features minifigures for the Mandalorian, the Child, an IG-11 droid, Greef Karga, and a Scout Trooper. It’s enough to kickstart your imagination and recreate a thrilling escape scene. This Razor Crest set is an excellent place to start if you’ve ever dreamt of living out your bounty hunting fantasies.

I am Your Father

Why it made the cut: The Darth Vader Helmet recreates the fearsome villain with menacing accuracy.

Dearth Vader’s helmet is one of the most iconic images in all of Star Wars lore. Build your own replica and make it a conversation piece. Though it isn’t huge, the 834-piece build delivers incredible detail and makes for a fun afternoon build. You even build your own stand, complete with a nameplate. You’ll have to do the voice yourself, though.

Why it made the cut: Luke Skywalker’s Landspeeder set features a detailed design that’s great for display.

If you want something on your shelf to admire, Luke Skywalker’s Landspeeder offers the perfect amount of detail. This set features an authentic design and “hover mode” with an information plaque. While it is a challenge to assemble, it is a worthy trophy to show off to friends and family. Luke Skywalker’s Landspeeder set also features a cockpit for Luke and C-3PO to sit and random scrap parts that are faithful to the movie. The set also includes custom-made Lego elements, including the cockpit windshield to protect its occupants on the desert planet Tatooine. With this level of authenticity, the Landspeeder is tailor-made to live on your shelf.

Why it made the cut: This small set features good variety and plenty of minifigures to stage an epic battle.

Once this 285-piece set is assembled, kids can stage a battle between the 501st Legion Clone Troopers and the Separatist Army’s Battle Droids and relive the action from Star Wars: The Clone Wars. The set includes five minifigures (three Clone Troopers and two Battle Droids), an AT-RT, and a BARC Speeder for the ultimate firepower. The AT-RT features posable legs and attachment points for a blaster, while the BARC Speeder has two stud shooters, bringing the battle to life. It’s a fun and exciting way to bring Star Wars: The Clone Wars to life and see who has the edge in the fight for good versus evil.

Why it made the cut: The Millennium Falcon Microfighter features a compact build that can pair well with other Lego Star Wars sets.

This Millennium Falcon Microfighter set shrinks the famous starship and includes a Han Solo minifigure, so you can take the smuggler anywhere you want. At 101 pieces, this is a great introductory set for kids playing with Lego for the first time. The Millennium Falcon features a seat for Han Solo, who carries his own blaster. The starship also includes two stud shooters, so you can bring the Empire fleet to its knees. It’s a fun, accessible set that can pair with anything else on this list, or make for a great toy out in the backyard.

Q: Which Lego Star Wars set has the most pieces?

Our “best old school” pick, the Ultimate Collector Series Millennium Falcon, is the largest Lego Star Wars set. With 7,541 pieces, it’s actually the fourth largest Lego set ever. (The biggest is an 11,695-piece map of the world, which is cool, I guess … but not nearly as cool as the Falcon.)

Q: What is the rarest Lego Star Wars set?

The majority of Lego Star Wars sets are only available for a limited time but some are more limited than others. Among the most coveted by collectors is a 3,803-piece Death Star set, which features an open design that allows collectors to recreate many of the saga’s most memorable scenes.

Lego retires sets across all its product lines. Like all toys, the company ends production on specific models for many reasons, from limited parts and inventory to declining demand to creating bandwidth for new products. It’s hard to say why Lego would retire any particular set.

There’s something special about assembling Lego Star Wars sets, bringing them to life piece by piece. The picks on our list explore some of the Star Wars saga’s most iconic moments and should appeal to all levels of fandom, from collectors to casual builders to young kids just getting started. Remember to have fun with whatever you pick, and may the force be with you.